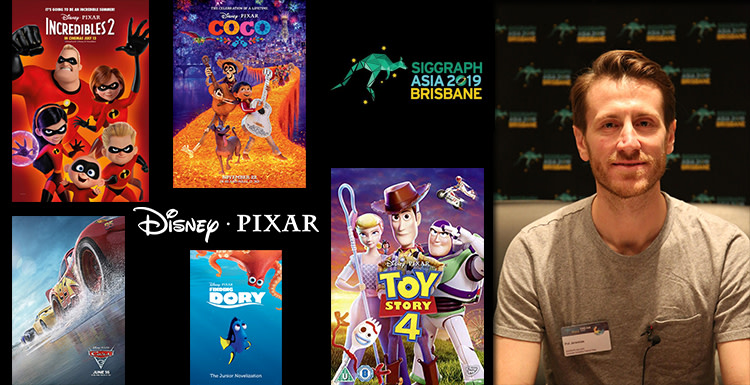 Pol Jeremias-Vila is the Co-Chair of SIGGRAPH Asia 2019 Computer Animation Festival (CAF). He has been a consistent force in helping to elevate the conference in many years.

Originally from Spain, Pol is the Lead Graphics Engineer at Pixar Animation Studios where he develops algorithms to help artists make movies. He is credited in multiple movies including Toy Story 4, Incredibles 2, Coco and Finding Dory. In addition to his credits on films, he is also the co-founder of Shadertoy.com, a website that enables graphics enthusiasts to create and share rendering knowledge.

Since 2012, Pol has been actively involved with SIGGRAPH, holding multiple roles on past conference committees, including as Computer Animation Festival Director, Real-Time Live! Chair, and Virtual, Augmented and Mixed Reality Chair, as well as serving as a content contributor and juror.

Also, he will chair the SIGGRAPH 2021 conference in Los Angeles. Let’s look forward to a new CG memorable ride.

Here’s the interview between Pol Jeremias-Vila and Fox Renderfarm, in which Pol shared his SIGGRAPH experience and the unforgettable memory in SIGGRAPH Asia 2019.

Fox Renderfarm: Why are you so passionate about Computer Animation Festival (CAF)?

Pol Jeremias-Vila: One of the things I like about the Computer Animation Festival is something as technical, as how we render a polygon can be used to tell meaningful stories that can either inform people how the lights went off in Puerto Rico, and how that affected the rest of the country, or it can tell a story about Mascot. It can help with the development of feature films through visual effects, like this simple piece of technology can help tell all these different stories, and it can help create this medium. And I think that's a very interesting field and I personally really like it of course.

Fox Renderfarm: What’s your goal for the CAF in SIGGRAPH Asia 2019?

Pol Jeremias-Vila: We wanted to create a show this year that had a lot of varieties that you could see the different ways in which computer graphics are used. And for us, it was important to showcase scientific visualization. We believe this is a field that uses computer graphics in a very important way, and we wanted to support that. So we actively supported that, you can see it in the film, similarly, visual effects. I think for us that was one of the goals, say, we're gonna make a show that really tells the story that you can use this technology in different ways. And it doesn't need to be just short films. It could be advertising as well.

Fox Renderfarm: Any unforgettable memory about this CAF?

Pol Jeremias-Vila: This year I’m co-chairing along with Jinny Choo, the SIGGRAPH Asia Computer Animation Festival. So great memories, I think seeing the numbers of submissions coming in was really satisfying. We did a lot of work to outreach to areas in which we hadn't done it as intensively. And seeing all those numbers and seeing all the submissions from schools all over the world, it was really rewarding.

Fox Renderfarm: There is an ‘inter-see show’ in this CAF, any efforts behind that?

Pol Jeremias-Vila: For us, it was a way to break the rhythm of the show and make sure that there was a little bit of surprise as well, like something that wasn't really expected. We have inter-see shows after each piece, so you can expect the inter-see show, and then we put something that may be surprising for some people, hopefully, funny, and trying to make it all be a more coherent experience. Even though they're disconnected stories, we try to create a flow that lasts an hour and 40 minutes. It doesn't feel like too disconnected. It needs to flow.

Fox Renderfarm: Could you share some rendering technology development trends with us?

Pol Jeremias-Vila: One of the things that we are seeing in the Computer Animation Festival (is) that there are more submissions that are using real-time engines to produce short films. And this is always interesting and we try to support every technology that is used for filmmaking. So this year we showcased some works that were using real-time engines as well as other techniques that are already using, offline renderers, path tracing or ray tracing. Again, we don't necessarily look at the technology per se more, so like the artistic composition and a story. We do try to showcase the different ways in which you can use computer graphics to tell stories. For example, this year we have scientific visualization, we have advertising; we have visual effects breakdowns, short films. All of them use computer graphics regardless of being a real-time render or being an offline render. They all use this medium to tell stories and that's what really matters, and it's at the core of the festival.

Some works of CAF Electronic Theater

Fox Renderfarm: Any difficulties that you’ve met when you were working on CAF? And how did you solve it?

Pol Jeremias-Vila: So there is an obvious physical difficulty when you are on site. You have to deal with screens, projectors, light that might be coming in from other rooms. We try to create this perfect environment and to enjoy films. And we try to be as respectful as we can with the works that are submitted to our conference. We care a lot about how that video is playback. (I’m) not sure (if) that is difficult but it's definitely one of the parts that we try to really take good care (of). Another part that's interesting always is how to deal with these big numbers of submissions, and how to make sure that they are all properly reviewed that we have enough opinions on each of the pieces. So we can have our jurors provide good decisions, so they have enough information to do a good decision. What we see though is that we do have a lot of content that gets through our hands and we would love to have more spaces, in which we can show it. So this year we have also an Animation Theater that goes and runs all day long.

Fox Renderfarm: SIGGRAPH is closely associated with the emerging technologies, how do you integrate them better?

Pol Jeremias-Vila: Personally, one of the things we did in North America in 2017, was to invest in a new way of seeing 360 and VR films. And for us, it was to create a new physical space that people could go in the same way that you go into the Electronic Theater to see the best of the 2D films. Can we create a physical space that people can go and enjoy VR? I think it was a great success. It's happening as well here in SIGGRAPH Asia. And I'm sure that sometime, we will see some forms of stories that are grounded in the real world through AR or something like that. I don’t know exactly what that will be, and I think that's why SIGGRAPH always needs to be aware of what's happening in those spaces, what are those stories going to look like, and how we are going to support those creators. That's where I see that as SIGGRAPH members, we need to be thinking about those things, talking about it, and talking to the people that are creating those stories to make sure they have a place here, and they can show it.

Fox Renderfarm: SIGGRAPH 2021 will be in Los Angeles! As Conference Chair for SIGGRAPH 2021, anything you want to share with us?

Pol Jeremias-Vila: Really excited! We will start working the way on preparing SIGGRAPH 2021. We bring the team together. It's going to be in Los Angeles. I'm not sure what technologies will be around in 2021. We might have some surprises. The team that we are working together is spectacular. I'm really confident that we're gonna have a really awesome show. We're gonna have actually our first on-site meeting in February of next year. So, this project takes time to prepare. So, really excited about it!

Pol Jeremias-Vila: Yes! I have it (the brochure) right here!

Pol Jeremias-Vila: If you have an opportunity to see the Computer Animation Festival 2019. We hope you really enjoy it! Please request showing in your local areas. We'll be more than happy to try to arrange that. We hope you enjoy the show!

Special thanks to Rajeev Dwivedi from Live Pixel Technologies.