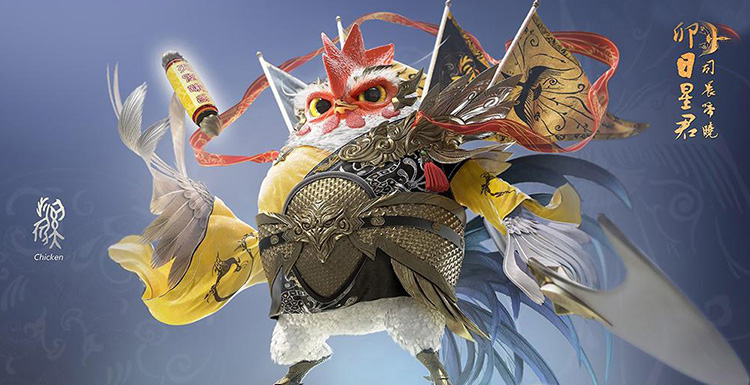 John just wanted to draw a illustration of chicken. He also recently learned about the Blender version of VRay. He saw VRay's node in Blender, which is much more interesting than in 3ds Max and Maya, so he want to use the V-Ray for Blender to make the work.
Software used: Blender 2.78a, 3ds Max2017, VRay 3.4 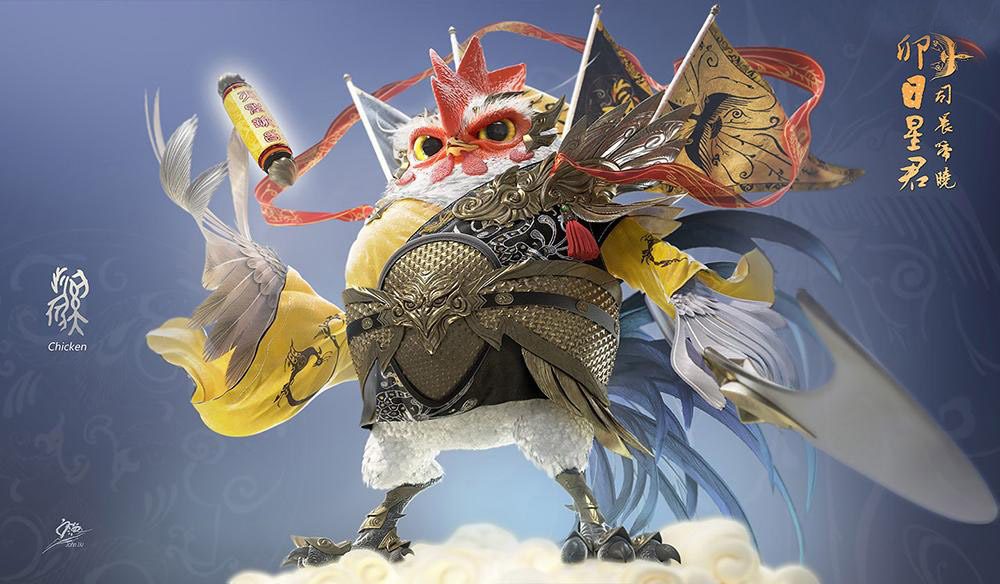 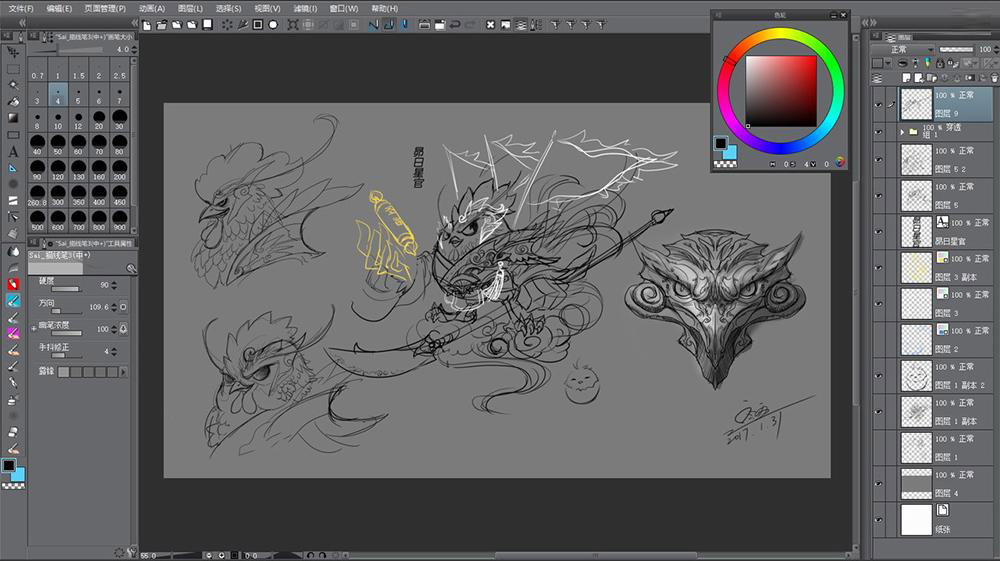 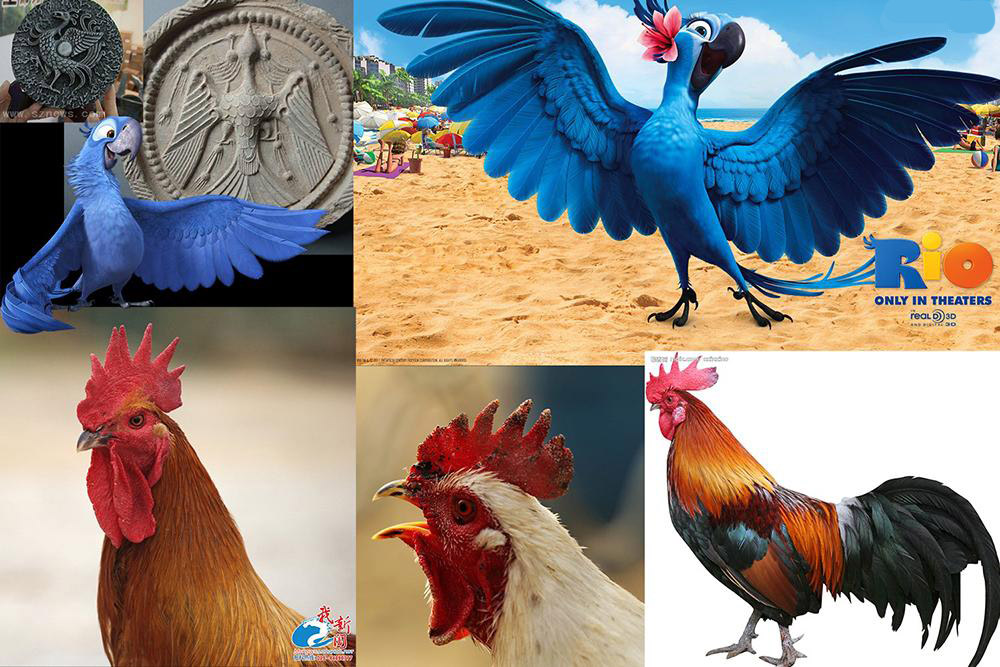 Setting drafts can be free, but when creating 3D, the collection of materials is a thing must to do!
Modeling
All models are done in Blender, using the same process as the current mature process, engraving the embryo model > topology based model > engraving fine model. 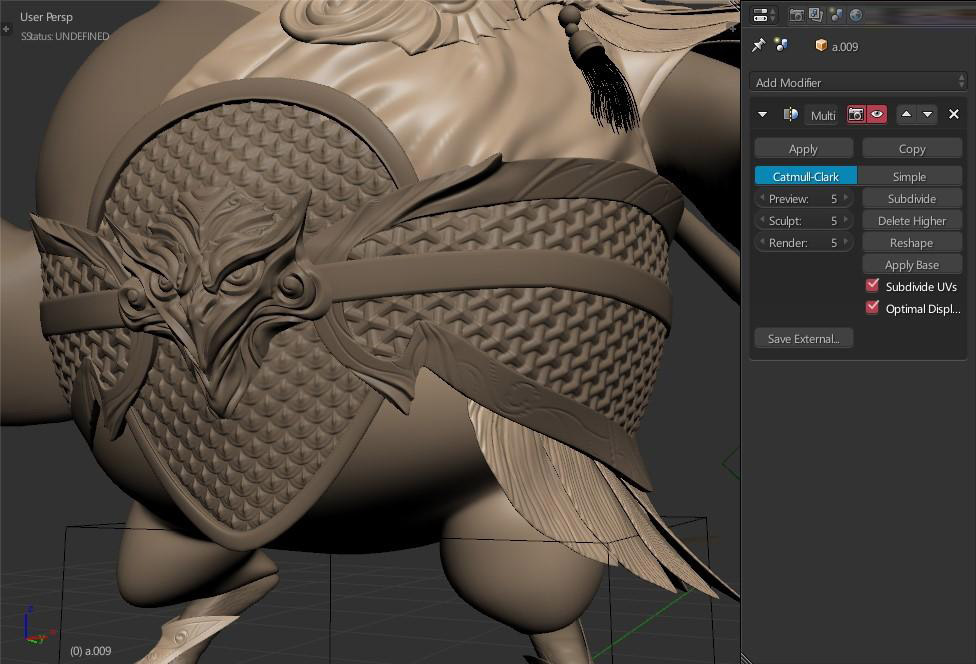 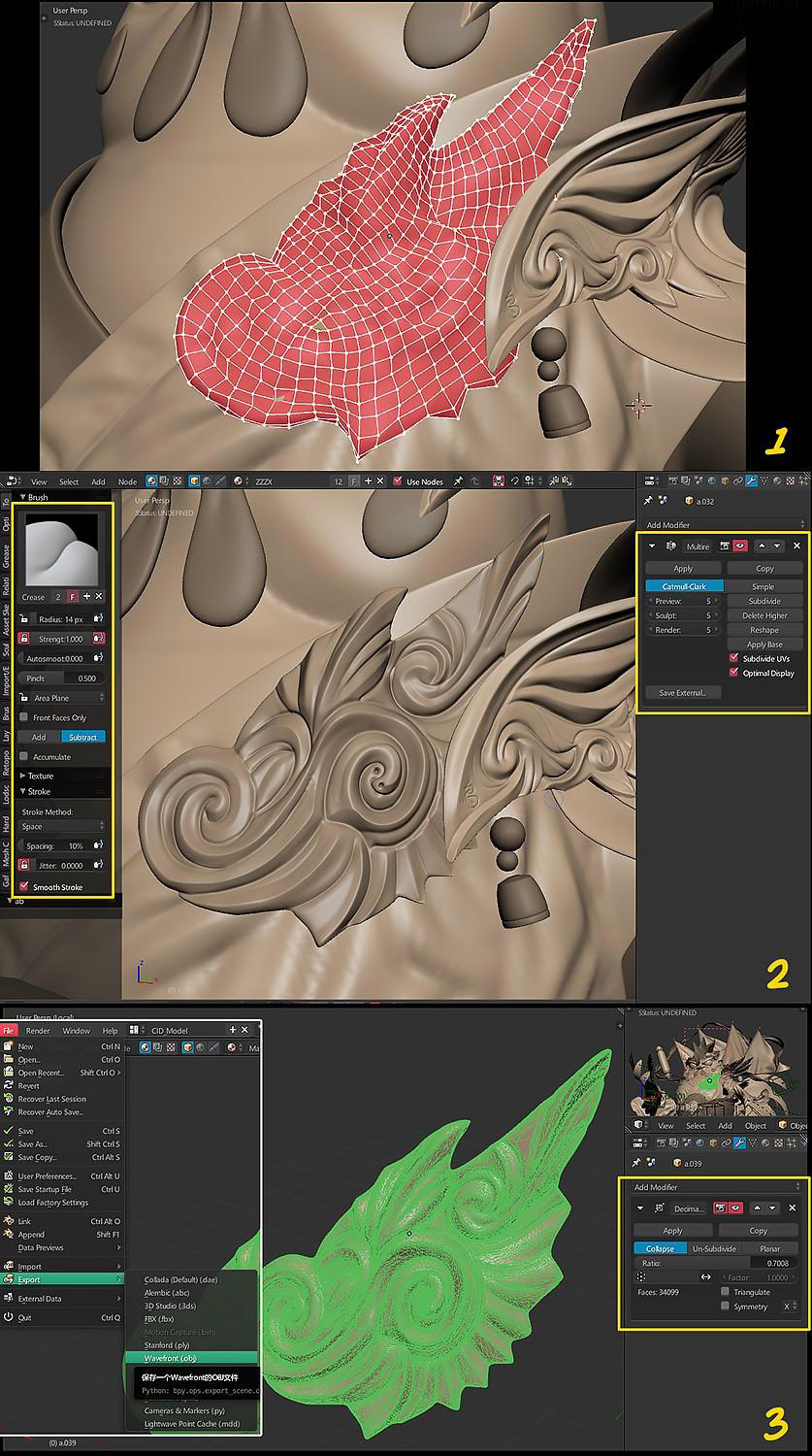 The armor does not use the displacement texture, but directly after the low-module of the Blender, it is directly exported into the OBJ format and sent to 3ds Max for rendering.
In the figure 2 is the engraving part, and the figure 3 uses Blender's own reducer modifier for the engraved fine mold reduction. This modifier can be regarded as a simplified version of ZBrush's Decimation Master, which is very easy to use and is almost exactly the same features as the Decimation Master.

Feather production: According to the structure of the bird feathers, do it one by one > Show UV>Rig>Skinning>Tpose>Remove Rig> and adjust to the effect you want.

The clothes and feathers are the same, first make the foundation, then rig, get the basic shape, remove the rig, use the engraving to complete the details of the fabric. 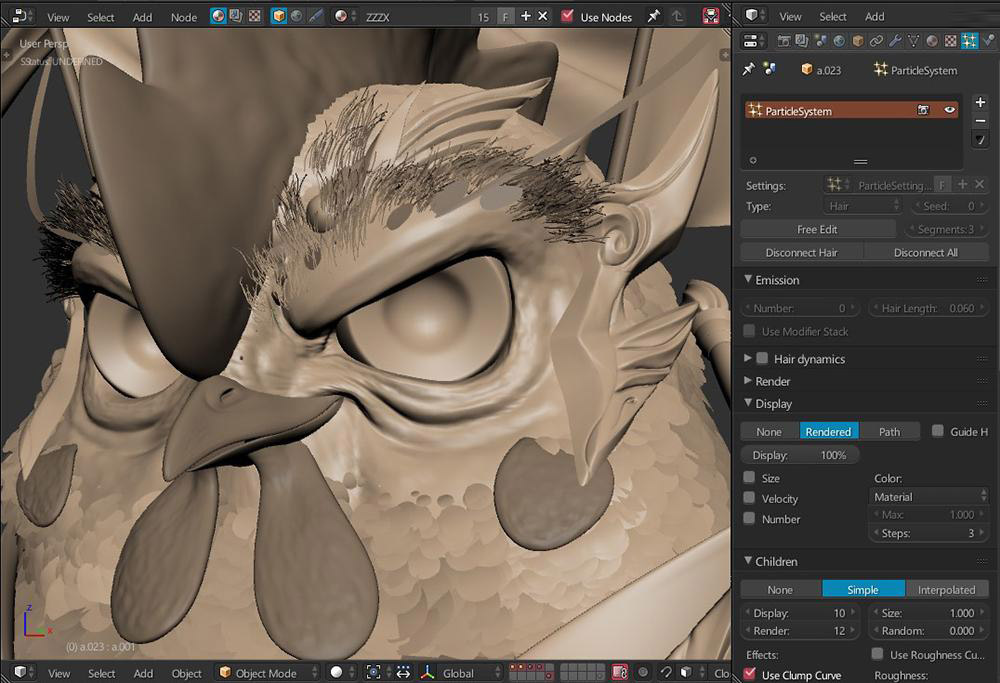 The hair between the eyebrows and the feathers on the body are obtained by combing the particle hair system of Blender. Blender's Hair&Fur is very good and can be easily converted to a Polygon line segment for export to 3ds Max. 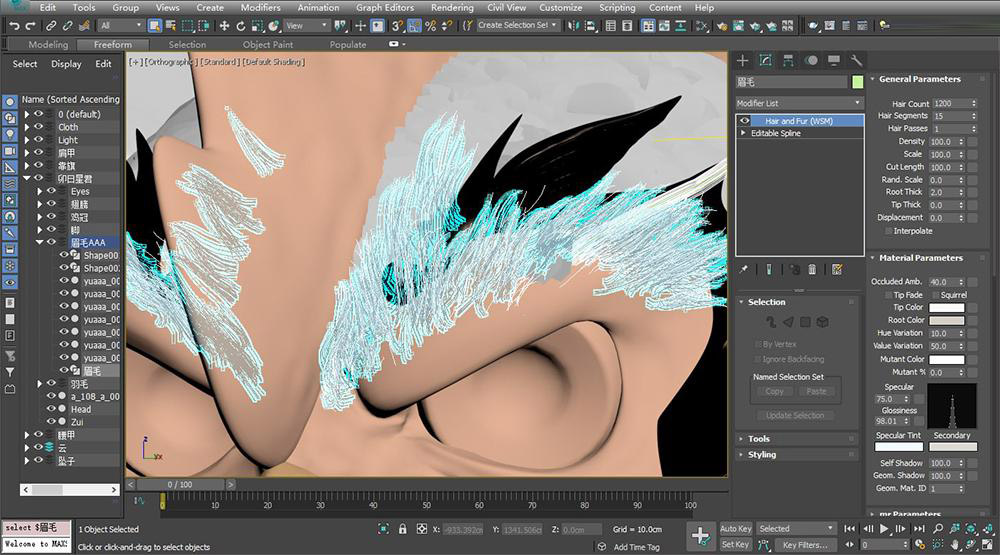 After importing these guides into 3ds Max, he used 3ds Max's own hair system, Hair&Fur, to complete the hair generation.
Pose 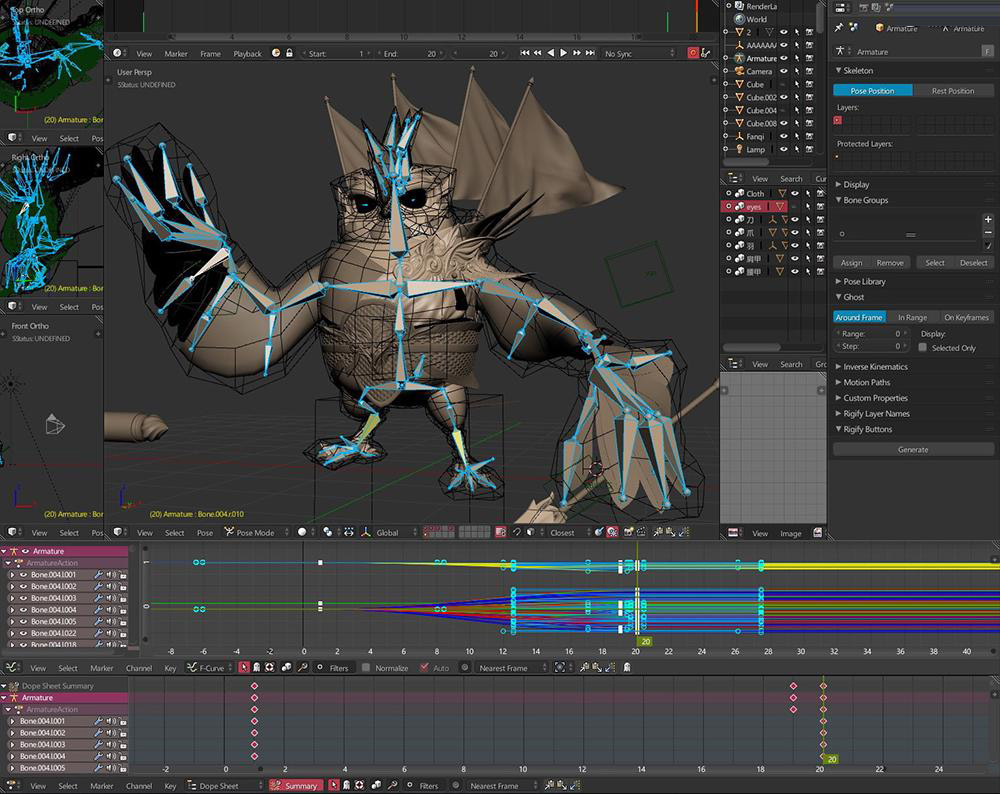 Quickly built the bones, because it is not an animation, so do not consider IK, as long as there are bones to pose, it is an animation, mainly to facilitate the model image adjustment, you can quickly return to the original position.
You can create a lot of Blender's window, so using dual screen operation will bring a very good efficiency.
Light
He watched Moana and was impressed by the bright light and shadows inside. Really liked this bright light, so the lights of the Sunstar Pleiades did not use the strong contrast of light and dark to render the atmosphere, mainly to let the luminous flux is very sufficient, so that the dark part has enough light to create a bright, fresh feeling.
There is basically no suspense in the light, the main light, the backlight, the top light, the side light, the fill light, basically all used again. 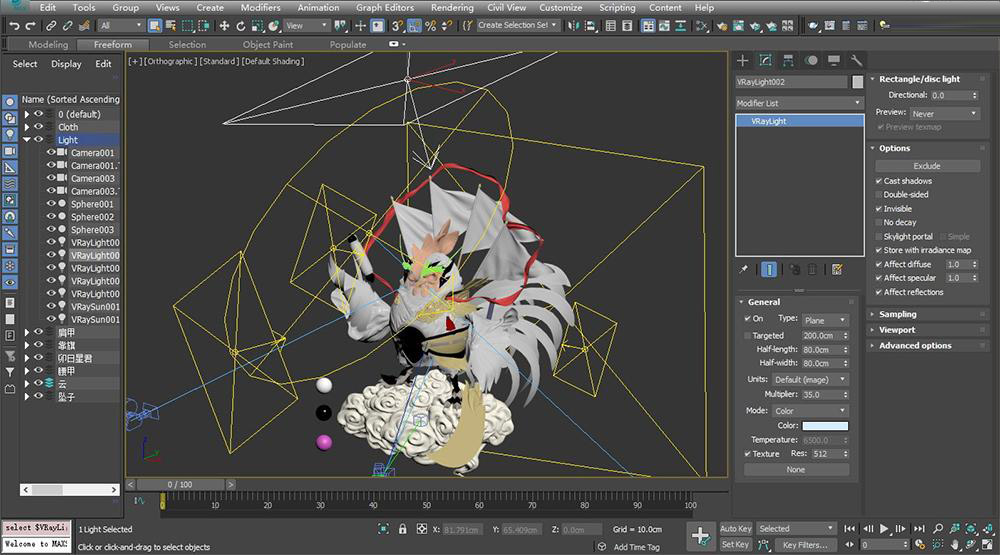 The lighting of surroundings uses HDR. 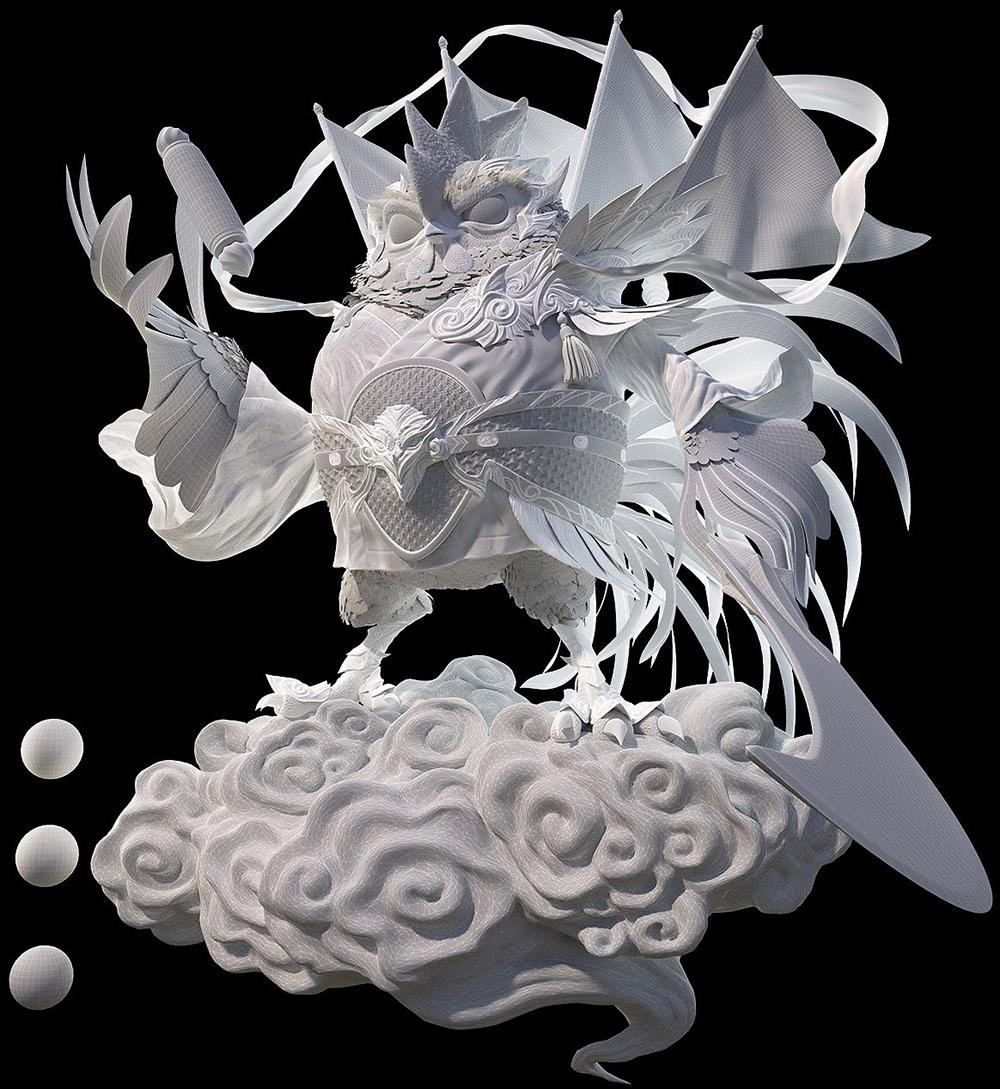 In the white mold stage, the basic light and darkness of the light is created.
TEX
Material Production Instead of using the traditional way of drawing textures, I used nodes instead of the process of editing textures in flat software.
Since the birth of Quixel and Substance, the production and editing of materials has begun to change in the process. Many softwares have also added similar node functions, such as 3DCoat, houdini, etc., so VRay is no exception.
The advantage of this process is that with the help of real-time rendering capabilities, editing and creating materials is basically what you can see, which can greatly reduce the trouble of switching to flat software, save more texture size, and many details and effects are simulated by the node in the PS map. The layer method is obtained, and the material editing becomes very flexible and convenient.
For the natural weathering and wear of objects, this process has awesome effects and can create many natural details quickly and easily. The golden armor of the next day is the use of this process, no UV, all rely on VRay's powerful nodes to mix the details of the material.
Well, the sharing of parameters have no meaning at all. The model structure, the size of the volume, and the parameters will change accordingly.
Here are two V-Ray map nodes, VRayDirt and VRayTriplanarTex:

VRayDirt uses its AO effect to create sharp-angle masks for models without UV.
The VRayTriplanarTex triangle map node is a box map fusion in Blender's Cycles. This is an important update node in VRay 3.4. It is an omnidirectional texture wrap node. It allows you to perfectly apply a texture to an object without UV, and there will be no seams.
By relying on the combination of these two nodes, you can easily get the Mask of the right edge effect, and then use VRayTriplanarTex to complete multiple combinations such as Diffuse, highlight reflection, bump map, and then VRay material can be quickly obtained. 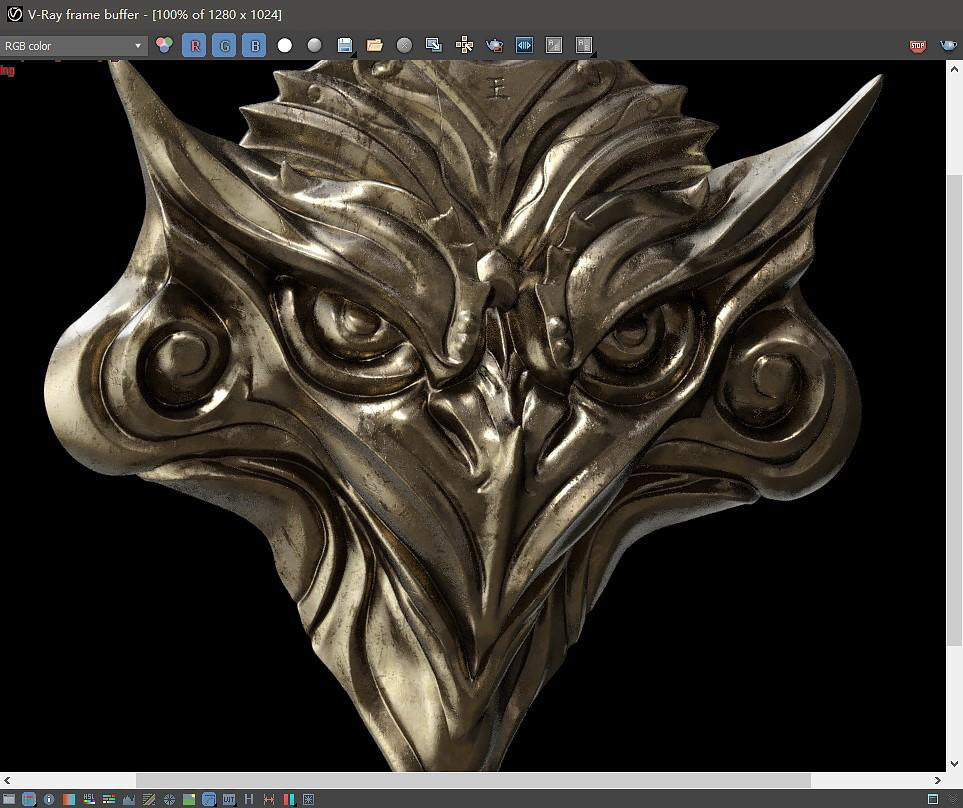 The effect here is just a show, and you can go deeper into more details. It’s just that for the work of the Sunstar Pleiades, because it’s a god, and it should be new and clean. So, there is no deliberate pursuit of war damage and dirty material performance. (In fact, this guy has no time to do it)
Another introduced node is Vray's MultiSubTex, which can perform multiple objects with the same texture but different texture colors through a material, which greatly reduces the number of materials and can manage these materials very intuitively. 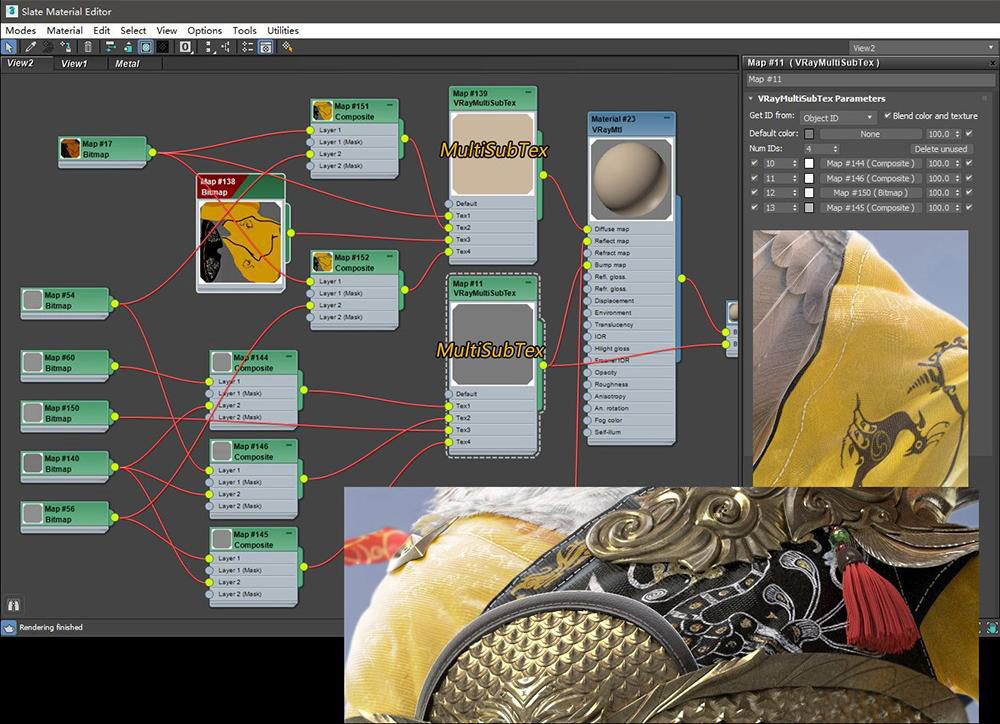 The clothes of the Sunstar Pleiades are made up of 4 objects. Although they are arranged in the same UV, the directions in the UV are not the same, so that the cloth size or the direction is unreasonable. In the cloth material node, I added the MultiSubTex node. Through this node, the object ID property can be used to effectively manage the texture direction and size of four different objects. This makes it easy to make the texture of the four models reasonable.
Rendering
The rendering settings are basically the same as the original ones. GI I used the Brute force + Light Cache method. 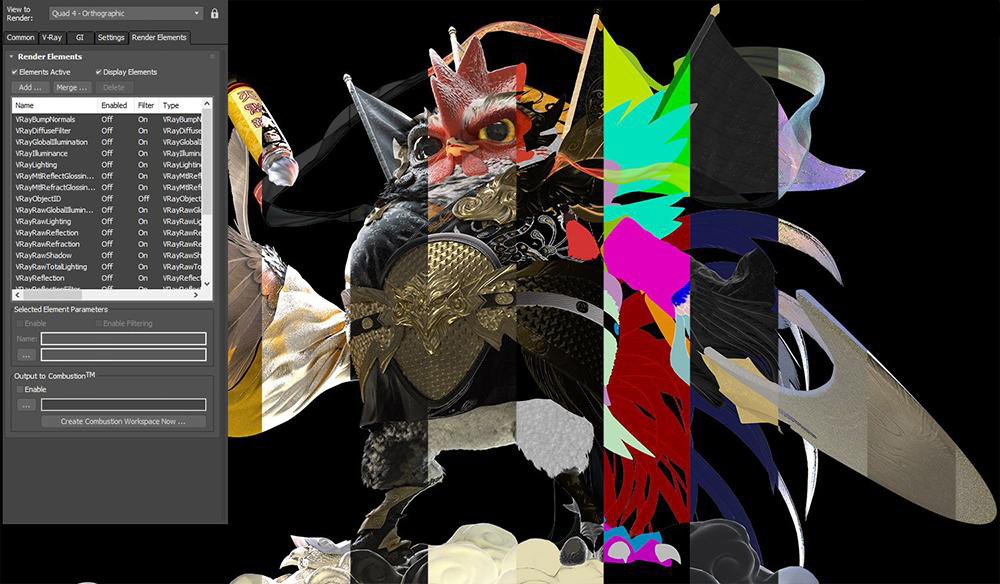 A lot of channel output, rendering the finished product is not easy, so avoid the channels that can be rendered after the regrets are turned on, including highlights, reflections, Z channels, object ID and AO are necessary.
Post-production
Synthesize the color in the PS, add the background, correct some small defects, and finally the finished picture!
BY: John (Liu Yang) 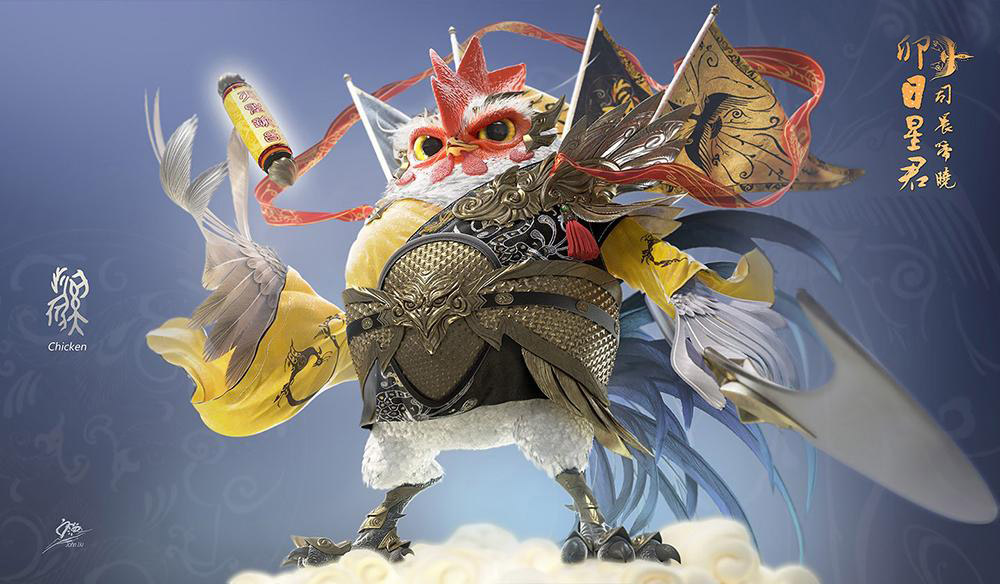 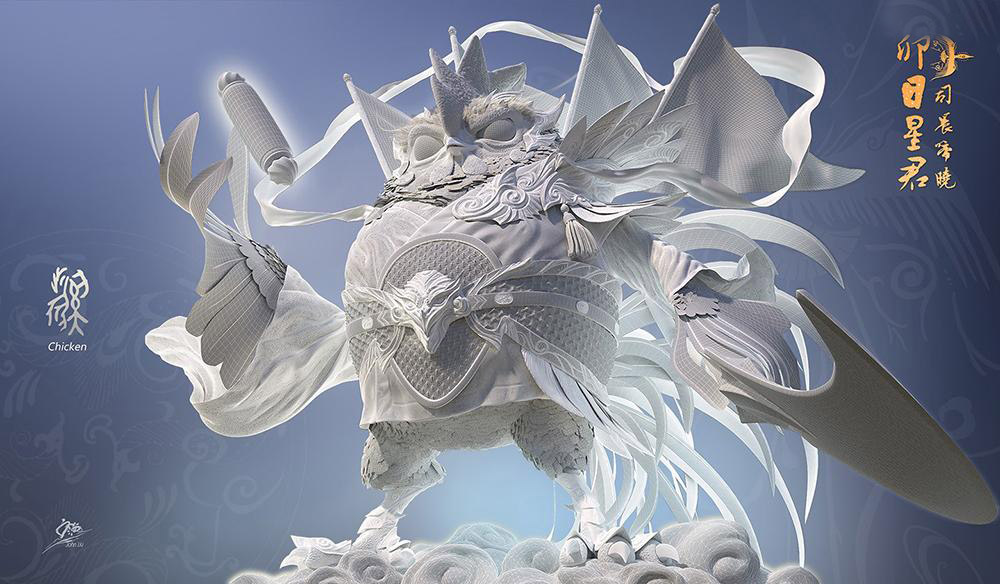 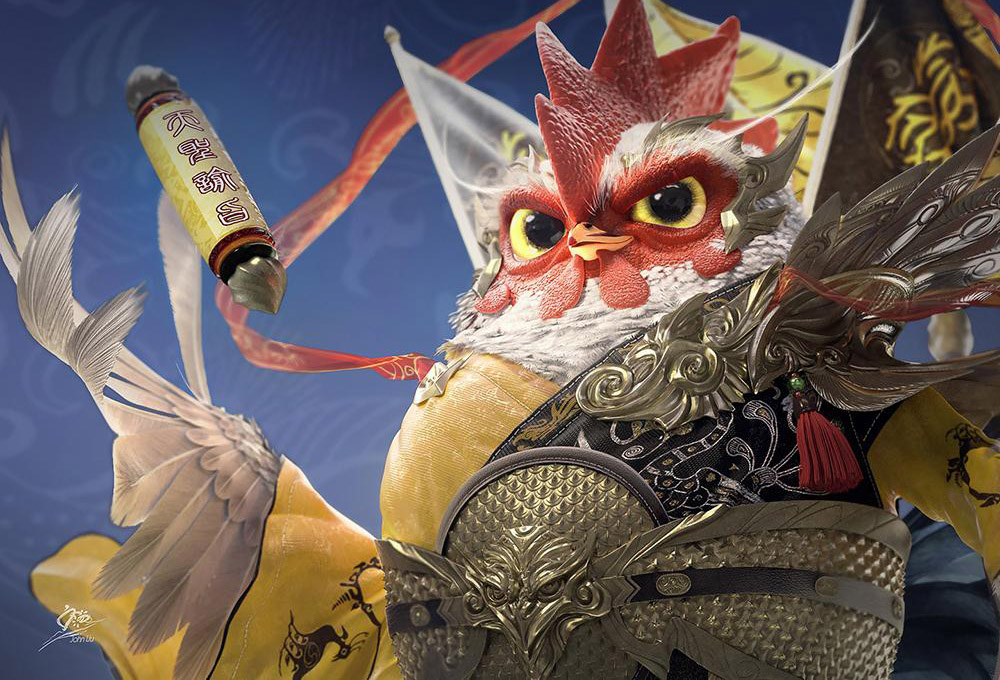 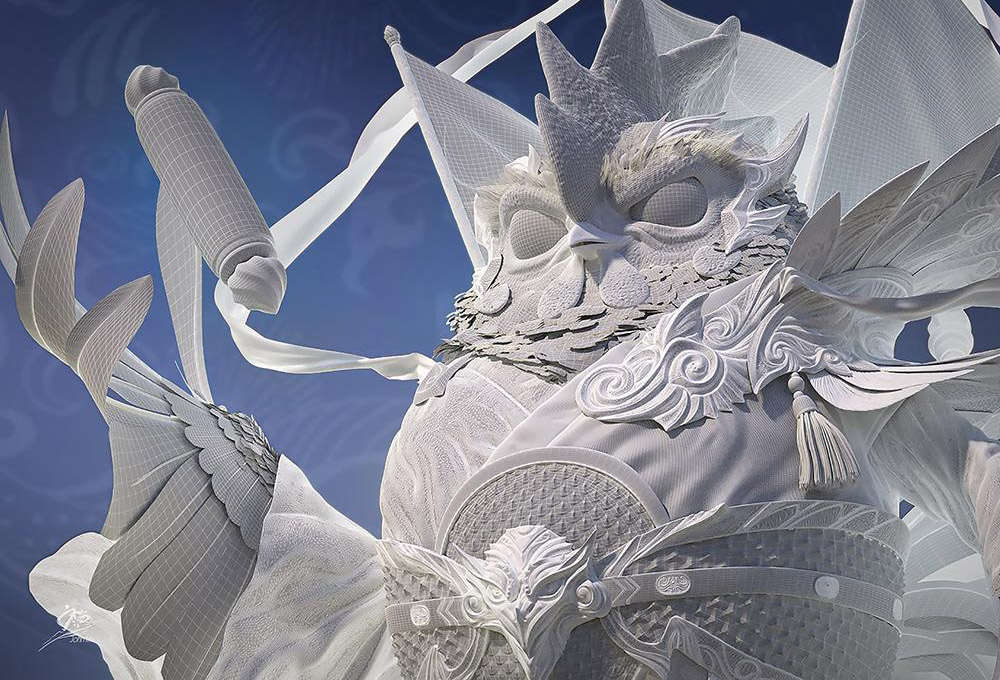 Previous: The Creation Analysis of A Sci-Fi Scene