V-Ray 3.4 For Sketchup To Make A Work "Container Cabin"

The best cloud rendering services provider and GPU & CPU render farm, Fox Renderfarm, will share with you a 3D tutorial of making container cabin with V-Ray 3.4 for SketchUp.

A rendering exercise using V-Ray 3.4 for SketchUp, which uses the public model of the 3D Warehouse. The software used including SketchUp, V-Ray, Photoshop.

An existing model is used here, and the model is derived from the 3D Warehouse.

The model has a high level of detail and can be used directly as an exercise. The position of the camera uses a lower angle to look up at the building.

After choosing this angle, I began to think about what kind of effect I would end up with. In architecture and landscape design, there are many times when you need to further express your plan. After browsing through many excellent renderings, we will find that rendering performance requires artistic effects, and this performance is related to architectural photography and aesthetics.

In this work, I observed this angle and felt that the day view was too dull, so I conceived a picture of the evening, and the energy radiated from the back of the building. Then start the arrangement.

First of all, in order to add reflection trees to the glass, I copied a batch of trees to the front of the building.

Then in the building, some furniture models were added to add detail.

After the model is finished, it will start to be rendered.

In terms of material, the structural part of the building is mainly black steel, which is the general metal making parameter. However, in order to pursue the details, it also benefits from the new material property layer. I added a rust map to the metal as a mask to make the metal more Details. (Reflect Gloss - Use Mix texture in Reflection Glossiness and use rust maps to make two gray masks.)

Then start to illuminate the scene. In the process of lighting, it is not necessary to be too restrictive to the light. In many cases, it needs to be adjusted according to your own feelings.

The light source of the entire scene is divided into three parts.

The first is the dome lighting, which uses a cool-toned dusk HDR.

The second is the V-Ray sphere light behind the building. The height of the sun is in line with the HDR sun height and the angle is very low.

The third is the lighting in the building's interior, placed directly on top of the building, thanks to interactive rendering, constantly adjusting the intensity and color of the light source.

Interactive rendering greatly facilitates the adjustment of the light. On the ground, I used the VFS grass directly, which is very easy to use, much faster than making grass.

I did not make too many adjustments and directly pulled up the plot parameters. And added Z channel, MID.

First, camera raw adjusts the color level, then uses the mask to buckle out the sky, mixing two skyes. Then use the channel to select the background tree to lower the hue, give a curve, raise the shadow and then brush out some details of the dark part, then take a screenshot, then use camera raw to adjust the color gradation, hue contrast and so on. Finally, add light to the architectural lights, and add vignetting around.

Previous: V-Ray For Sketchup To Make A Rendering Imitate The Penda Style

Next: Octane For C4D Tutorial: How To Make A Strange Cube 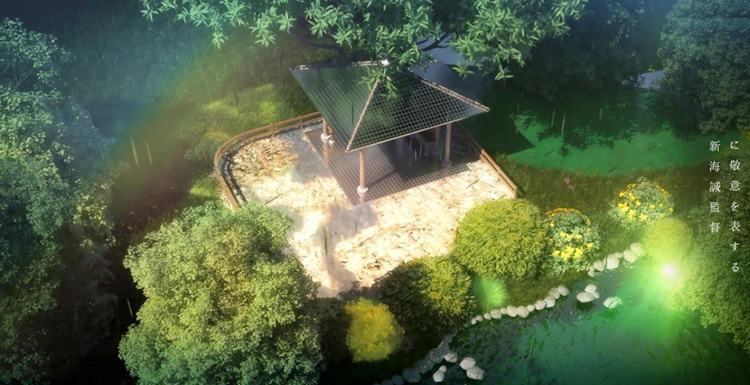