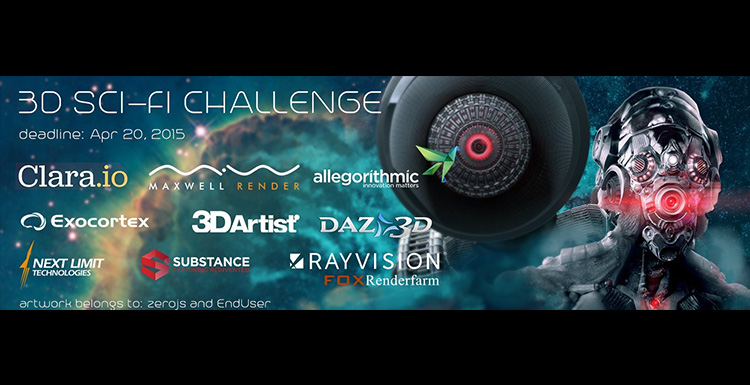 Tell us what you see when you lift the veil and peek into the dystopian or utopian future worlds. What is your idea of alternative universe and highly altered state of existence? Are there beings out there?

What do they look like? What do they do and how do they live? When you step into those parallel planets, does your heart stop due to their colorful beauty or overwhelming fear? Can we take a space lift to travel there? Let the current of questions take you to unimagined places and thrill you with implausible adventures and stories. Ignite the future with a spark of untamed imagination.

We have run a similar challenge last year and have been taken aback by the creativity and effort that went into modeling spaceships, characters, buildings, vehicles, guns and all kinds of concept 3D models that intensified the experience of visiting future worlds. In fact, it's rather addictive, so here we are again, asking you to pull the big guns and show us some back to the future stuff that would make this challenge a roaring adventure.

There are two categories of awards in this challenge. Each of them will have one winner and two runner-ups.

For the 1st place winners

For the 1st runner-ups

For the 2nd runner-ups

Things you must know

Things you should know

The judging of the challenge will be performed by CGTrader staff. Winners will be chosen following the requirements below:

Do I need to upload files or only images of my 3D design?

You need to upload files and images of your 3D design in order to participate in the challenge.

I don't want to put my entry model for sale. Do you have any suggestions?

Does earning money from your digital files sounds like a bad idea? Just try to put higher price on it, let's say 300 USD.

I don't want to loose copyrights on my model after it is sold.

There are General, Editorial and Custom licenses for you to choose under which you want to operate. Individuals or companies which bought your model can't use it for commercial purposes if it hasn't been changed. So no worries - you won't loose the copyright.

How can I participate in the challenge?

What if I put the required tag on my already published 3D model on CGTrader - do you treat it as a valid entry?

No. Only 3D models uploaded in the period from the 20th of February to the 17th of April 2015 will be treated as valid entries.

Do free 3D models participate in the challenge?

Yes, absolutely. Sharing artwork is always appreciated in the community.

Can I enter with 3D models which participated in other challenges elsewhere?

Yes. There are no restrictions on publishing and selling your models elsewhere.

Do price tags play any importance when entries are being judged?

No. But do not forget that the prices are always judged by the customers.

I want to participate in the challenge so I am going to delete my already uploaded models and upload them again to meet the "publishing period" requirement. Can I do that?

No. We are tracking every deleted and uploaded model, so it is useless to drive-through our requirements of the challenge.

Previous: The Evolution of 3D Rendering and Why You Need to Consider It

Next: RAYVISION Congratulates Michael Wakelam on Releasing the Successful Trailer for His New Film ‘Life of Bri’ n Chris’ 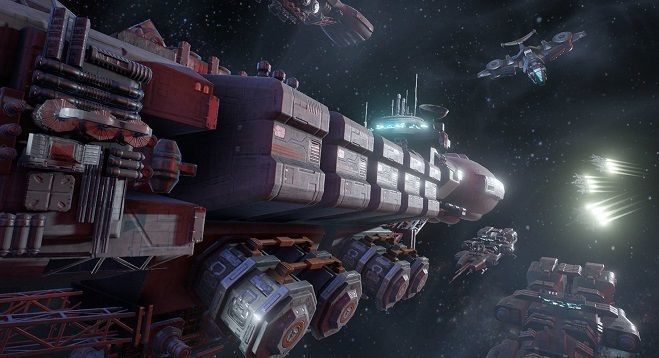 Winners of 3D Challenge: SPACE by CGTrader | Sponsored by Fox Renderfarm
Another challenge has come to an end. This time, the 3D Challenge with the theme of Space organized by CGTrader ran from the 9th October 2017 till 10th December 2017 and has attracted artists from all over the world to submit original space-themed designs in low (models up to 50,000 polygons) and high (models with more than 50,000 polygons) poly categories. The end of the challenge means the start of the extremely difficult models’ evaluation process due to huge participation from the artists. A total of 240 high-quality models were submitted ranging from planets, asteroids, aliens, rockets, satellites to space stations have been evaluated and dozens of discussion were made! Most models in this challenge are ready for Virtual Reality (VR), Augmented Reality (AR), games and other real-time apps. Judging panels from Fox Renderfarm, CGTrader, 3D-Coat, Cebas Visual Technology, Quixel, and Exlevel worked together to decide the Challenge winners. The judging criteria for both categories were quality of the model (the most IMPORTANT criteria), as well as uniqueness, innovation, and general achievement in design of the model. Well, there are only just six places for the winners. So, fasten your seatbelts and let’s look at the winner's list! Low Poly Category Winner: “4 Spaceship Set” by triplebrick Description: A set of 4 highly detailed spaceships for interstellar fleet with PBR metal/smoothness workflow, 4k textures, small ships have one material, large ships two materials and details can be removed on the larger ships. Prize: $250 rendering credits by Fox Renderfarm 1st Runner Up: “Scout Space-ship RS-1” by Antonio112661 Description: High quality Scout space-ship RS-1 model which could be used in any game. This asset is optimized and hand tweaked. The textures tuned for Physically-Based Rendering. 16688 polygon count. Prize: $150 rendering credits by Fox Renderfarm 2nd Runner Up: “Lambro Robot” by furqaan Description: The model is based on transformers look due to the robot is made of lamborghini parts and engine. Prize: $100 rendering credits by Fox Renderfarm High Poly Category Winner: “Space Pursuit MFP Disc Driver” 3D model by eccemania Description: The artist’s own vision from a spaceship pursuit with one back tyre and hover engine. Works without driver, the MFP Disc Driver has a programmable memory. Drive with rechargeable power cell and hover system, VROOOM!!! Prize: $250 rendering credits by Fox Renderfarm 1st Runner Up: “PBR Detailed Robot” by jackfurneri1984 Description: The model has been created with Autodesk Maya (version 2016) - Textured and polypainted in Substance Painter 2 and rendered with different render engines (Arnold by Solid Angle and Marmoset Toolbag 3 package). There are 20557 faces, 21467 vertices, all pieces can be separated from each other (legs, gears, hands, etc..) with unwrapped UVs with no overlapping. Prize: $150 rendering credits by Fox Renderfarm 2nd Runner Up: “Icarus Orbital – Space Station” 3D model by shaun Description: The Icarus space station model is a huge and detailed orbital station which is packed full of details and character. This space station is Intricately designed by Shaun T. Williams BA for practical usage and design within its role as an orbital space station for habitat and re-supply. The station boasts a variety of details such as antennas and radio equipment, docking bays, airlocks and many other features which make it perfect for detailed close-up shots with well-optimized model and is 2,255,400 Tris / 1,112,114 Polys. Prize: $100 rendering credits by Fox Renderfarm Fox Renderfarm is proud to be the official render farm sponsor for this 3D Challenge: SPACE. The challenge is co-jointly sponsored by Fox Renderfarm, 3D-Coat, Quixel, Exlevel and Cebas Visual Technology. p/s: Shhh! Fox Renderfarm will be launching Fox’s Got Talent in the near future with lots of attractive prizes waiting for everyone to grab! So, stay tuned!
More
2018-01-24

3D CG Flora and Fauna Challenge Winners Announced!
Inspired by summer, CGTrader launched Flora and Fauna challenge. It was their second challenge about 3D model and render. Now, the result of the much-anticipated challenge finally came out! Surprisingly, not only the challenge theme became a tradition, but also the 1st place winner! That only shows us how loyal, dedicated and concentrated on the specific topics the designers are! CG Flora and Fauna challenge run from May 29th, 2015, to July 29th, 2015. In these 8 week, CGTrader got 141 entries to the challenge. Designers combined their imagination and creativity with their professional skills of CG. They shows us the amazing work! Designers’ motivation is incredible prizes sponsored by Rayvision, Happy Digital, Laubwerk, Greyscalegorilla, CG Cookie and Exlevel! Isn't it? Let’s see the attractive prizes: $1000 render fee by Rayvision Autograss licenses by Happy Digital Plants Kits by Laubwerk Transform tools by Greyscalegorilla Memberships by CG Cookie GrowFX licenses from Exlevel Let's move to the most interesting part and find out who are the best ones! Best Model Category Winner: cgmobile Winning model: Brown Bear 1st Runner-up: Dennish2010 Winning model: Wolf 2nd Runner-up: jhanziwest Winning model: Flora assets bundle trees and rocks Best Portfolio Winner: 3DRTcom Winning Portfolio: Dinosaur 1st Runner-up: Modern-mynk Winning model: Portfolio For more information: `http://www.cgtrader.com/blog/3d-cg-flora-and-fauna-challenge-winners-announced`
More
2015-08-13

CGTrader CG Wildlife Challenge’s Blockbuster Launch
As the pioneer of world’s cloud render farm, Fox Renderfarm sponsors so many world-class CG challenges. After 3D SciFi Challenge, CG Flora & Fauna Challenge, CG Game Characters Challenge and First Model Challenge, Fox Renderfarm sponsors the Fifth CGTrader CG challenge - CG Wildlife Challenge. Nature is our home that all the things can’t live without. We are familiar with nature. Inspired by nature, CGTrader launched a new CG challenge themed “wildlife”. You can find the inspiration from animals, plants and environment. Choose the one that fits you best, put your ideas to the 3D, render them and create a memorable and worthy winner! There will be 3 winner categories for CG Wildlife Challenge: Best Animal Category, Best Plant Category, Best Nature Environment Category. Awards will be given for the best 3D CG Model or the visualization uploaded during the challenge period. CGTrader are teaming up with Fox Renderfarm (Rendering fees), Exlevel (GrowFX Licenses), 3DCoat (Professional Licenses), Video Copilot (3D Shader Bundles), Dosch Design (Tree Libraries) and CGCookie (Memberships) to bring you the prizes worth fighting for! For more information: `https://www.cgtrader.com/challenges/cg-wildlife-challenge`
More
2016-02-02