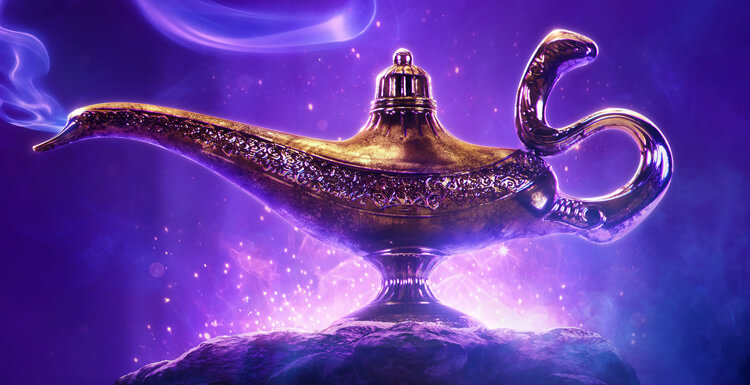 In addition to Dumbo, another live-action movie that will be seen this year is the same classic Aladdin as Disney. Its animated version was released in 1992, and the new director is a very "hardcore" British director Guy Ritchie. In the original story, the flying carpet juvenile Aladdin met a beautiful princess who dressed as a civilian and ran out of the palace. He also encountered a magic lamp that can help people realize their wishes, and opened an adventure trip against the evil national teacher.Live-action Aladdin seems to be taking the path of Lion King. The trailer's scene and rhythm almost restored the original settings. In the trailer, the classic characters in Aladdin all appeared, and a batch of high-definition official pictures were released online.In addition to the villain Jafar (Marwan Kenzari)'s live-action version is too young and less evil, the rest of the other characters are still very high. However, the final version of the Will Smith version of the Magic Lamp Jinn in the trailer made the netizen blast. First of all, everyone said, "So bule as Will Smith", and the decoration is too exaggerated. In the animated version, the image of Magic Lamp Jinn was originally designed with the inspiration of “smoke” and “water droplets”. It is easy to achieve the “longing for freedom” that he represents with minimal detail and abstract painting in changeable body shape. Many people worry that live-action will lose the feeling of Jinn when they appear in the magic lamp. It’s not just the star face of Will Smith’s, but also it’s look like a blue Huck from the back! Netizens also use all the blue characters that can be imagined to spoof the Will Smith version of the Jinn, such as "Avatar" and "sonic the hedgehog". But in any case, this magic lamp make the sense of humor burst. After seeing everyone's reaction and spit, Disney also confidently assured that "After the film is released, you will definitely let everyone fall in love with this new Magic Lamp Jinn!".

This year's upcoming Disney movie will include Captain Marvel, Avengers: Endgame, Frozen 2, Toy Story 4, and The Lion King, Dumbo and Aladdin, both of them are live-action movies based on animation.The Dumbo animated version premiered in the United States in 1941 and is one of Disney's first classic animations. In the story, the circus' newborn elephant Dumbo is regarded as a laughing stock by everyone because of its oversized ears. But with the help of friends, Dumbo gradually embraced his own uniqueness and became a well-deserved superstar. Dumbo poster, 1941The Disney live-action movie Dumbo, which will be released this year, will be directed by Tim Burton.Unlike the original version, in the live-action Dumbo movie, Dumbo found his "flight" potential and the friend who always accompanied, encouraged him, to become human characters, and of course the All-Star lineup. There are former circus stars Holt Farrier(Colin Farrell), and a French trapeze artist, Colette Marchant(Eva Green).There is also a bad-hearted circus owner, Max Medici (Danny DeVito), and V. A. Vandemere (Michael Keaton), who looks sultry but equally disgusting. What Tim Burton is best at is creating a fantastic, weird atmosphere. In the Dumbo trailer, the design and atmosphere of the original circus in the 1940s truly presented Burton's style - a mysterious sense of darkness. Dumbo magically found himself flying when he was playing with two children. The trailer also saw mouse friends who had been encouraging the help in the original animation. Tim in Dumbo, 1941Of course, if there is no tears, it is not disney’s style, and the trailer has not let everyone's tears. There’s something particularly depressing about seeing the Momma Elephant’ trunk stick out of the bars to wrap around poor little Dumbo, as the chilling tones of Norwegian singer Aurora’s “Baby Mine” waft over them. There is also a illusion of Dumbo's drunkenness in the trailer. Compared with the old illusion of childhood shadows, the new version is both psychedelic and beautiful. At the end of the original story, Dumbo became the super star in the circus and rescued the imprisoned mother. This time, netizens expressed the hope that in the new edition, Dumbo will have a better ending. In an interview a few years ago, Tim Burton also revealed that he really wanted to give the newborn elephant a true "happy ending" - no need to perform for humans, but to leave the circus and return to the nature life they should belong to. However, if the outcome is as satisfactory as expected, we will not know until the end of March.