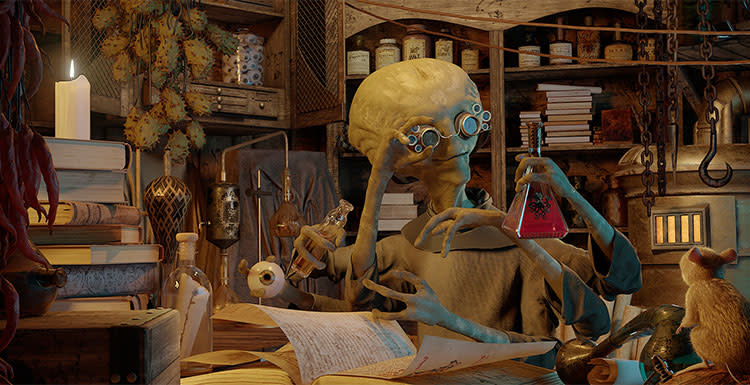 The secrets of Alchemy has drawn interests of many to search for its magic and mysterious power behind. CG Boost held a 3D render challenge with the appealing theme “Alchemist”. Submissions from the imaginative artists are so diverse that they blow the audience’s mind.

As a leading render farm in the CG industry, Fox Renderfarm is glad to interview with Peshang Ahmed, 3rd place winner in the challenge. Peshang shared with us his inspiration for his alien-look alchemist, and how he made the artwork alive with the surroundings and lighting.

Fox Renderfarm: Hi, Peshang! Thank you so much for accepting our interview! Could you please give us a brief introduction about yourself?

Peshang: Hi, my name is Peshang, and I'm a 3D Generalist in Kurdistan, Iraq, working for commercials and product visualization, and a part-time CG instructor.

Fox Renderfarm: How do you feel about winning the 3rd place in CG Boost Alchemist Challenge this time?

Peshang: It's such a great pleasure to win the 3rd place as my first time entering CGBoost challenge also a good opportunity to challenge yourself and be free from client guidelines and requirements.

Fox Renderfarm: Your artwork is fun and futuristic with the alien, could you tell us the inspiration for this Alchemy artwork? Which part of the artwork do you like most?

Peshang: I was doing rough sketches for creatures to warm up and start making up the story from the character's standpoint, after a few searches, I found Kamaji from Spirited Away movie suitable for my alien creature, and I thought that it would be cool to have a six-handed alien doing alchemy!

Kamaji in Spirited Away

Fox Renderfarm: Could you introduce a bit about the lighting of the artwork?

Peshang: After a few iterations in grey material I decided to go with a brighter theme with some separate area lights, I wanted to use the oven as a backlight for the alien or some green lights from the side to give more of a contrast and break tonality. And a classic candle for the alchemist's room.

Fox Renderfarm: The picture has such a contentful design with a lot of details, such as the mouse and chains in the front, and all the objects and shelves behind. How did you make them? And any ideas behind the layout design?

Peshang: The whole idea was making everything else lead to the character itself, that way I could make it enough detailed while still having the character as my main focal point.

I tried to make use of tyFlow and its PhysX solver to come over the issue of having too many books, paper scrolls, and bottles, so spending a bit more time making procedural and modular assets to help me out later to crowd the scene.

The same goes for the chains except that its spline-based simulation so that it gets a natural hanging feel.

To balance out the foreground I prepared the rat model with Topology and UVs by using ZRemesher and UV Master in ZBrush and Ornatrix for hair grooming. The layout of the Scene was very simple, having shelves for books and items surrounding the alien itself and an oven, so the Alien can do his experiments and hide the walls as much as possible, plus some dried plants hanging around to cover the upper and foreground of the image.

Fox Renderfarm: And about the protagonist, did you refer to any movies or literature when creating it? Could you tell us a bit about the process you made it?

Peshang: Yes indeed, I was inspired by John Carter for the skin texture and Yoda from Star Wars also six-handed because I like Kamaji from The Spirited Away movie.

conceptualization part was depending on Blender, Max, Photoshop to do quick render tests and 3D sketches so that I can decide on the composition and paint over it in Photoshop.

After that, I used ZBrush for secondary and tertiary forms and Mari was used for tiny small skin details by using XYZ textures and sending it back to ZBrush to tweak the amount of the displacement map.

My quick workflow for making clothes is about sculpting the general shape and poly grouping the surface with mask and send it to Marvelous Designer for cloth simulations, after that using Maya to layout my UVs and make simple rigs so that I feel free to pose the character how I want it later in the shot.

As for the texturing process, I try to keep it as procedural as possible so that I can play with more iterations in that stage as well by relying heavily on Procedural masks and noises in Substance Painter.

First I set up a basic skin shader and check the scale of SSS material to give it more of a shallow look, once I feel ok with the look before I send everything to Substance Painter I bake a cavity map from ZBrush to bring details later on in Substance Painter.

Finally baking everything and send it to 3ds Max, at this point I have a basic studio lighting setup for the assets to make sure that the shaders are all consistent and work with each other in terms of saturation and detail.

Fox Renderfarm: How long did it take to finish the artwork? What software and plugins did you use?

Peshang: I was still trying to improve the artwork as much as I could in the last few hours of the challenges.

I tend to use what fits my workflow with ease, so as for programs I used: Blender, 3ds Max, Photoshop to sketch the idea in 3D and paint over it in Photoshop.

Modeling with Maya and 3ds Max, while using Zbrush for detail works and baking maps, Cloth works was done in Marvelous Designer.

Texturing inside of Substance Painter and Mari.

Corona renderer for the final Render inside of 3ds Max.

Fox Renderfarm: What’s the most interesting and unforgettable part for you in the production?

Peshang: Texturing all of those assets and making it look elegant to some level is what I can look back and say Wow!

Fox Renderfarm: Did you meet any difficulties? And how did you solve them?

Peshang: Lighting the scene was something tricky for me, and I tried to solve it by looking up some photography references and rendering a lot of versions to see what works best.

Fox Renderfarm: When and why did you begin your 3D creation? And could you tell us a bit about the education and career experience along your 3D journey?

Peshang: My first encounter with 3D was back in 2009 when I was looking for art magazines online and I found "3D creative issue 01", that was my first time seeing something related to CG and for my luck, it was talking about the whole industry from scratch. I am a self-taught artist, back then I was learning from Gnomon Workshop's DVDs and slowly building up as a character artist then working in commercials as a generalist.

Fox Renderfarm: As an outstanding 3D artist, what did you do to improve your professional skills and keep motivated?

Peshang: I always refer to traditional art and try to learn from them as much as possible, and I set up daily challenges for myself to extend my skills as an artist.

Fox Renderfarm: Anyone or any artwork in the industry inspire you the most?

Peshang: "Shadowline: The Art of Iain McCaig", Jeremy Vickery's Artworks, also Sergio Toppi's comic books is something that I use very often to refresh the visual style I love most.

Shadowline: The Art of Iain McCaig

Fox Renderfarm: Have you ever tried Fox Renderfarm cloud rendering services? If yes, how do you feel about it?

Peshang: I am so excited to try it out with my new upcoming project!

Fox Renderfarm: Anything else you wanna share with CG enthusiasts?

Peshang: Try to have daily challenges in any particular subject related to 3D/2D or traditional Art skills, Study real life and use references everywhere.