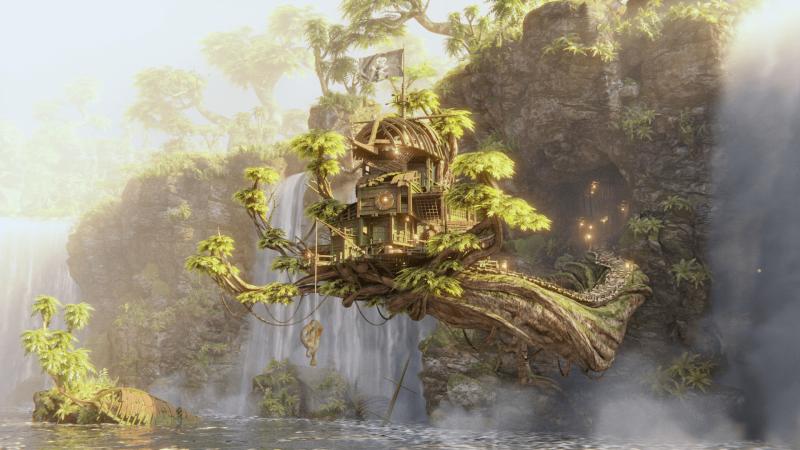 The concept of treehouse spurs a lot of imagination about the romantic or adventurous atmosphere with natural beauty from starry night, jungles to tranquille lakes and so forth. CG Boost set “Treehouse” as the theme of their September challenge, setting a stage to let numerous talented artists to splash their imagination and CG techniques.

Fox Renderfarm, as a world leading cloud rendering service provider, sponsored the great challenge. Plus, we are so honored to have the chance to interview the 1st Place winner - Florian Linke.

The narrative and mysterious ambient delivered by the artwork catches the jury’s attention alone with the nice lighting and balanced compositing.

Florian about his entry:

“The tree house built by survivors out of the remnants of wrecked ships that got lost and crashed down the waterfalls is meant to portray the will of people to not give up and survive, no matter the circumstances.

This is my first participation, and during the creation of this project I had to learn about many new things like adaptive subdivision and volumes. It took me the whole month to complete, because I am not very advanced (yet), and overall it was really just a lot of fun experimenting around.”

Let’s dig into our interview with Florian and enjoy the creative process altogether.

Fox Renderfarm: Hey Florian, congrats on winning the 1st Place in the CGBoost Treehouse Challenge! Could you introduce yourself to us?

Florian: Hello there and thank you very much, my name is Florian Linke and I am an amateur CG enthusiast from Vienna, Austria.

Fox Renderfarm: The winning artwork is quite narrative and appealing, could you share with us the idea and inspiration behind the artwork?

Florian: Both nature and pirates have always been very inspiring to me, and the theme of the challenge seemed to go really well with both. The idea is that some ships got lost and ended up crashing down the waterfalls in the background. After that, the survivors built a new home on the tree, partially out of the remains of the wrecked ships. I always liked the idea of never giving up, and wanted to do my best to portray this idea.

Fox Renderfarm: What software and plugin did you use to create the artwork?

Florian: I used Blender for the entire scene, and GIMP for some minor color correction.

Florian: I have been working on the project on and off for around three weeks. It took me so long because I had to experiment a lot with different things, and learn a lot of new stuff to be able to make some elements of the scene.

Fox Renderfarm: Could you share with us your creative progress, from modeling to the final rendering?

Florian: First, I started with a simple blockout, to get a rough idea for the layout. I changed this around a lot, until I had a better plan.

I then started to replace all the placeholder models with new ones, starting with the cliffs, then the tree, the house, and lastly, the background vegetation. The cliffs are just round cubes, stacked and subdivided, and displaced with a height map. The tree was made using Blender’s skin modifier, by intertwining the branches to create a sort of tree hand.

Lastly, I added some mist, tweaked the lighting, and tried to use volumes to make the waterfalls look more convincing. I then added the background vegetation, which was made in the same way as the big tree, and some smaller plants and treetops made from transparent images of leaves and branches.

Fox Renderfarm: The treehouse is the main object in the whole picture, did you model it from scratch? How did you make it vivid while keeping its structure organic?

Florian: I first modeled some planks and wooden bars, then arranged them into sort of wall and floor modules, and then built the house itself out of these elements, keeping it all relatively loose and chaotic. After that I just modeled some decorative assets like nets and barrels and placed them on the platforms around the house.

Fox Renderfarm: Are there any special considerations behind the texture?

Florian: I tried to make everything look a little mossy, without stressing my PC too much, by mixing a moss material into every normal material. The moss on the tree and rocks is always on top, and on the house, it is in the nooks and corners.

Fox Renderfarm: The lighting setup plays an important role in creating the atmosphere. How did you arrange the lighting, especially the fog and the detailed lighting in the cave?

Florian: I modeled all the mist and fog in the scene as solid objects first, and then used Blender‘’s mesh to volume modifier to get the volume to have the exact shape I needed. The lights in the cave are just regular point lights, placed inside small lantern models.

Fox Renderfarm: Did you meet any difficulty in the process? How did you solve it?

Florian: One of the biggest difficulties was actually the cliffs. I am not super experienced when it comes to 3D art, so I had to experiment and try a lot of different approaches to get it right.

Fox Renderfarm: How did you encounter CG? Could you share with us your education and career experience in the CG industry?

Florian: The first time I knew that I wanted to learn 3D art, was when I played on the original playstation as a kid.

Fox Renderfarm: Could you give some advice to the people who want to step into this industry?

Florian: Don’t let anything discourage or intimidate you. Learning 3D art is often hard and complicated, but if you keep at it, it will soon become second nature. There are so many programs and helpful tools as well as tutorials available nowadays, often for free or at a very affordable price, so no matter where you stand, nothing stands in the way of your dream!

Fox Renderfarm: Any artwork or artist inspires you the most?

Florian: I am a huge fan of the works from Zdzislaw Beksinski, his surreal and disturbing, yet strangely beautiful art really helps with getting new ideas.