Behind the Scenes: Cafed Kona

In the process of learning Blender, I gradually got a certain degree of familiarity with each link and production process, so I wanted to try to create a work of my own. First, I found a reference on the Internet, then set up a scene model, create an atmosphere, material, rendering, etc., and finally showed the best effects.

In the process of production, I encountered many problems, such as how to perfectly bridge the base of the syphon pot base and the foot of the base. When the two things are connected at the beginning, because the wiring is different, there is always a problem, so the syphon pot filter In the case of the filter, these filter holes are exaggerated after Boolean. In this case, all the wires need to be connected reasonably, so that the shape of the syphon filter can be perfectly produced.

However, it is more difficult than this to see the spiral springs under the filter, and how the small steel balls below are perfectly placed in the glass bottle. I didn't know how to start. But, after many tests, the steel balls in the filter were increased by the number of arrays in the modifier, and the path was planned with a curve, which was placed according to the curvature of the glass.

After all the difficulties, the model was finally completed, the whole scene was set up, and the bar and wine cabinet were added. Wine glasses and wine barrels were placed on the wine cabinet, and a lot of wine bottles were put in to make the picture richer.

In the performance of the wood material, the texture of a chicken wing wood is used, the effect is amazing, and the texture of the whole set is improved. At the beginning, the bar used the material of the wood. The whole appearance was too dark to highlight the main body. Later it was changed to marble material and embellished.

Even a small coffee bean is meticulous.

This work uses Blender's powerful rendering function. No lighting is used in the rendering. The final rendering has not been modified. Just add an AO layer to the rendering, perfect for glass and wood and metal. The texture is expressed. And very close to the real effect. The blender's rendering capabilities are really powerful.

From encountering problems to solving problems, there are still many things to learn. Modeling is the first thing to learn, followed by lighting, materials, and rendering. The lighting and rendering’s settings are simple in blender, but I still need to learn more in terms of materials. To perfect each of your own works, and to add more design sense based on the model, will make your work better.

About the Author Lizhu Xie

Previous: How to use online render farms?

Next: What is an online render farm?

Blender 2.90 is out now!
Blender 2.90 is out now! Building on the success of the 2.8x series, Blender 2.90 continues to polish the user experience, introducing improvements to EEVEE, Cycles, sculpt, VR, animation, modeling, UV editing and so much more. Watch the video and tell us how you like the new features. More: ?fbclid=IwAR0xXP7iBgou01jc1PjA_aWFAaLnAG3GCdD4P_UXg2oXgd8Rae77I_1m_28
More
2020-09-09

Inspired by Animal Crossing: New Horizons, Korean artist use Blender to create exclusive cabins
As soon as Nintendo Switch launches Animal Crossing: New Horizons, it has been loved by game fans all over the world. Due to the epidemic, many people can enjoy traveling abroad through games during quarantine, which makes the Switch a hit again. And many CG artists eager to create many fan art or amazing creations. Korean designer Seungho Jeong (Neon3D) was invited to talk about his latest work "Miniature style cute character 3d artwork" (Soondol) and talk about the toy model made for the animation of "Molang". Seungho Jeong (Neon3D) Seungho Jeong, from South Korea, is good at product design and 3D printing. Most of them are created in Fusion360 and Blender. He is currently designing toy models for "Molang". He also runs a YouTube channel to share the process behind the scenes. Miniature style cute character 3d artwork (Soondol) Year of completion: 2020 Software: Blender Tell us about the artwork. Seungho Jeong: Recently I was playing Animal Crossing: New Horizons, and I was attracted by the cute graphic style in the game, so I proposed a series of creative projects, with my original character "Soon-dol" as the main character, and designed a series of The miniature style house in Mori. I use Cycle render in Blender to create. It is worth mentioning that instead of using texture mapping, I changed the color of the object or made some images using Illustrator, and used Blender's Shrinkwrap modifier to place the image on the character's face. The most difficult part of this work is the lighting effect. After all, to create "emits natural light from the outside of the window" is a test of the creator's Lighting skills. At first, I put a glass on the window, but then I found that no glass looks more natural, so I had to take it away. What is your usual job? Seungho Jeong: Mainly making character toy models. For example, the "Molang" series is currently on sale. I designed many different sets of costumes for the character, including Halloween, New Year, Hanbok and other styles. The main creative process is the use of product design software Fusion 360. It has a free-form modeling function, similar to Blender's modeling method. I also made an introduction video for the company's YouTube channel "Behind Molang". First, I redesigned all 2D characters into 3D. Since our company is not an animation studio but a character commodity company, most of the 3D creation process of characters is the process of making plastic models, such as Fusion 360 (some are designed directly in Blender). When creating images in 3D, as mentioned above, instead of using texture mapping, we change the color of the object or use Illustrator to create the image, which is created in accordance with the process of making dolls and doll models. Is animation different from product design? Seungho Jeong: Making animation is very difficult, after all, that is not my major. Although product production and animation look very similar, there are still some system differences. Therefore, I have to learn by myself and complete the animation creation, so I simplified the character movement as much as possible. Can you share your creative tips? Seungho Jeong: If you want to create on a hard surface, Fusion 360 is recommended, which can be modeled for the accuracy of the size, which is very convenient. In addition, the ShrinkWrap modifier is used to attach the image to Blender without any texture drawing. Who is your Favorite artist? Seungho Jeong: Absolutely my boss Hye-Ji Yoon, he is the character designer of "Molang". And Molang's animation is currently being played on Netflix, which is receiving the attention of the global audience! I respect my boss very much and want to be a well-known creator like him. Seungho Jeong’s Artstion: ``
More
2020-05-21 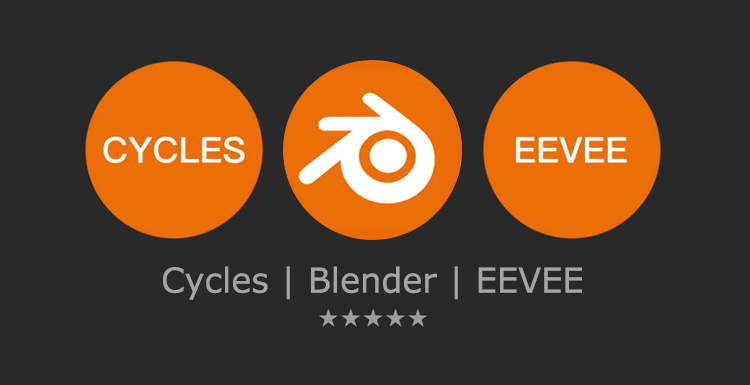 How to Render High-quality Images in Blender
With the development of computer technology, it has been widely used in the field of graphic design, so that ordinary people also have the opportunity to come into contact with Computer Graphics technology referred to as "CG technology". Computer Graphic Image is also computer 3D animation technology, referred to as "CGI". Whether it is "Toy Story", "The Lion King" or "1917", the success of these world-class blockbusters can not be separated from the establishment of models in 3D software, and then to visual effects, post-production software composition, Editing, and more. Image via blendercn.org As a new star in 3D software, blender integrates modeling, sculpting, binding, particles, animation, etc., and is a software that supports commercial creation for free forever. So how do we use blender to output high-quality images? Blender has 2 renderers that can convert a 3D scene into a 2D image. - Eevee is a physics-based real-time renderer. - Cycles is a physically-based ray-tracing renderer. Use plugins to add more third-party rendering engines. Each renderer has its own rendering settings to control rendering quality and performance. And the rendering effect is determined by the camera, lighting,and materials, which also determine the quality of the output images. Image via blendercn.org Here is the Cycles renderer that comes with Blender as an example. As a GPU-based rendering engine, rendering effects have become more and more mature, and its speed is much faster than the CPU renderer. So where does it affect the output image quality? Sampling The sampling method determines how the light is calculated. The light is emitted from the camera into the scene and bounces back and forth until they find a light source, such as a light object, a glowing object, or the ambient background light. Number of light path traces for a single pixel in the final render. The more samples there are, the less noise there will be in the result and the more accurate it will be. Path tracking The rendering attribute is the amount of light emitted from the camera to each pixel. The view attribute is used for scene rendering in the view. A value of 32 means that each pixel will be tracked by 32 rays.) Noise Noise in the image will greatly affect the image quality because 32 beams of light per pixel are not enough to produce a high-quality image (To reduce the noise by 50%, double the number of lights, so the rendering time will also double, depending on the computer configuration to set the value, at least 1024 if you want a better effect. Rendering properties The rendering properties greatly affect the rendering quality, try to adjust to the maximum value that the view can reach, and adjust the view back to 32 to maximize the quality. Optical Path Length It refers to the value of the number of bounces to track the path of each beam. The difference between 0 and the maximum will be very large. Camera Properties Camera size: It needs a proper ratio and size, and the focal length needs to be adjusted according to the content of the image. The appropriate size can display the details of the Depth of field. Depth of field: The choice of lens will affect the depth of field details. The depth of field determines how far away the object will be displayed clearly. Aperture radius: determines how far the object in the radius is clear, and it will become blurred Focus: Focus needs to be adjusted. Set important objects in the image as axes and adjust the appropriate aperture radius to show the correct object to the viewer. If you want to improve the quality of the images, you can try some of the suggestions above. Improving the quality of images is not something that can be improved by reading an article. Continuous learning and practice is the best way. Cycles is undoubtedly a young renderer. Blender is also constantly improving some of the features of Cycles, and it has a lot of room for development in the future. As your TPN-accredited cloud render farm, Fox Renderfarm supports most mainstream 3D software, renderers, and plugins, including Blender, 3ds Max, Maya, Cinema 4D, Clarisse, and more. We always provide fast, secure and affordable cloud rendering services to reduce your rendering time. Welcome to the blender render farm get a $ 25 free trial.
More
2020-03-09