Full List of GPU Render Farm For You to Choose

The price of Fox Renderfarm is as low as 0.036/core hour and offers a price estimator. It offers a free $25 trial for all new registrants.

In addition, Fox Renderfarm frequently hosts 3D challenges, such as the monthly FGT Art, where anyone who submits an entry can receive a render voucher for at least $20.

iRender is an IaaS and PaaS provider as well as a GPU render farm. It supports almost all 3D software such as Cinema 4D, Houdini, Maya, 3ds Max, Blender, etc. and is optimized for (Redshift, Octane, Blender, Vray, Iray, etc.) multi-GPU rendering tasks.

iRender charges based on time of use and supports 24/7 live chat.

GarageFarm is a fully automated cloud-based CPU and GPU render farm. GarageFarm allows you to easily upload and manage your projects. He supports most 3D software and plugins such as 3ds Max, Maya, Cinema4D, After Effects and Blender. GarageFarm's GPU nodes come with 8x Tesla K80 cards and 128 GB RAM. It offers a $25 free trial and 24/7 customer Live chat.

Ranch Computing is a render farm that supports both CPU and GPU rendering. Ranch Computing supports 3ds Max, Blender, Cinema 4D, Houdini and other software and displays the corresponding supported versions on its website.

Ranch Computing offers a free trial for 30€ and a 50% discount for academic projects. He does not support live chat, but you can chat via email or Skype.

As a GPU render farm, for GPU rendering, SuperRenders Farm is equipped with NVIDIA GTX 1080Ti for Graphic Card and 48GB - 128GB for RAM.

SuperRenders Farm supports all major applications used in the industry, such as 3dsMax, Maya and C4D.

Sign up for SuperRenders and you will receive a free $25 credit.

Animarender is an online rendering service that offers 24/7 live support. They support CPU and GPU rendering for all popular 3D modeling software such as 3ds Max, Cinema 4D, Maya and Blender.

Animarender has its own software, AnimaManager. AnimaManager allows you to install plugins directly into your 3D software and render with one click directly from the software interface. AnimaManager supports both Windows and Mac.

RenderStreet is primarily a Blender and Modo render farm that supports both CPU and GPU rendering. Its GPU servers are equipped with top-of-the-line NVIDIA® T4 GPU cards, roughly equivalent to one RTX 3080 card per server. RenderStreet's pricing is charged either by the hour or by the month. You can use only $1 for its one-day trial.

The best GPU render farm is the one that fits your needs. If you're still confused, try Fox Renderfarm, a powerful GPU render farm and leading cloud rendering service provider, offering a $25 free trial!

Previous: What's the Difference Between Supercomputer and Render farm? 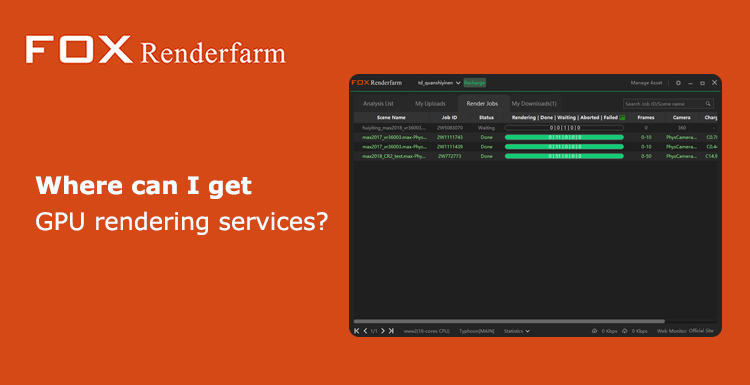 Top 4 Rendering Engines Used for Multi GPU Rendering
Top 4 Multi-GPU Rendering Engines 1. Redshift!Which Cloud Rendering Services are Used for Multi GPU Rendering 2Redshift Rendering Technologies Inc was founded in California in early 2012 with the goal of developing production-quality, GPU-accelerated renderers that support biased global lighting technologies that have hitherto been entirely within the CPU domain. Redshift is now part of the Maxon family and is rapidly becoming the first choice of rendering engine for the motion design community. The Redshift rendering engine supports a selection of 3D programs: Autodesk Maya, Autodesk 3Ds Max, Maxon Cinema 4D, Houdini and Katana.Recommended hardware requirements:- RAM: 16GB RAM or more- CPU: Core i7 or Xeon equivalent, 3.0GHz or higher- Graphics card: with 7.0 or higher CUDA computing power and NVIDIA GPU with 10GB or higher video memory: NVIDIA Quadro, Titan or GeForce RTX GPU for hardware-accelerated ray tracing.- Multiple GPUs 2. OctaneRender!Which Cloud Rendering Services are Used for Multi GPU Rendering 3OctaneRender® is one of the world's first and fastest bias-free, spectrally correct GPU rendering engines, offering quality and speed unmatched by any production renderer on the market. As a product of Refractive Software, Octane was founded by Terrence Vergauwen, the lead developer of LuxRender, and in March 2012, Refractive Software was acquired by Otoy, who also received investment from Autodesk. Now as part of the Otoy family, Octane supports 3Ds Max, Maya, Cinema 4D, Houdini, Daz Studio, Unreal Engine and many other softwares.Recommended hardware requirements:- RAM: 16GB RAM or more- Graphics: with CUDA computing power 3.0 or higher; and 10GB video memory of NVIDIA GPU: NVIDIA GeForce RTX GPU, GTX, Quadro, Titan- Multiple GPUs 3. EEVEE VS CYCLES!Which Cloud Rendering Services are Used for Multi GPU Rendering 4Eevee vs Cycles are the two main GPU rendering engines for Blender, the Blender Foundation's open source 3D creation software that enables users to handle all aspects of 3D work. It includes modeling, animation, game creation, visual effects and much more. Blender is easy to download, customize and work on your own terms. The software also offers a large number of plugins for creating various types of models, animations, sculptures and more. Ultimately, comparing Evee with Cycles is more or less just comparing real time with ray tracing.Recommended hardware requirements:- RAM: 16GB RAM or more- CPU: 64-bit quad-core CPU- Graphics card: At least 4GB of video memory- Multiple GPUsOptimal hardware requirements:- RAM: 32GB RAM or more- CPU: 64-bit octa-core CPU- Graphics: 12GB VRAM or more, RTX GPU, Quadro- Multiple GPUs 4. FStormRender!Which Cloud Rendering Services are Used for Multi GPU Rendering 5FStormRender is a new GPU-driven, unbiased renderer with good performance that is quite easy to use. It uses convenient materials and light sources, it is simple, fast and realistic. Currently, FStorm GPU rendering engine is only available for 3Ds Max software. We hope that this amazing renderer will be available for major 3D software in the near future.The FStormRender has many unique features such as improved tone mapping, glossy reflection shaders, glare effects, light sampling, improved ray tracer and optimized QMC sampling. The FStormRender is deeply integrated into the 3Ds Max environment and supports all necessary and critical features. The built-in scene converter allows easy and careful conversion of any scene from Corona, Octane and Vray renders. Fstorm is interactive, allowing the user to change the scene as it is rendered and to view these changes interactively without reloading. Any scene changes (other than geometry) are automatically reflected. Geometry changes require enabling live geometry updates or pressing the Reload Geometry button. Users can move the camera and get live updates in the frame buffer window.Recommended hardware requirements:- RAM: 16GB RAM or more- Graphics: NVIDIA Geforce GPU: RTX and GTX series- Multiple GPUs The Most Recommended Render Farm!Fox Renderfarm cloud renderingRendering on a multi GPU rendering engine can speed up rendering times, however, it requires thousands of dollars to build powerful workstations. In addition to purchasing a License, there is an investment of at least 4/6/8 GPU cards, compatible CPUs, motherboards, and other costs such as electricity and maintenance. In practice, it is possible to use Redshift, Octane or Fstorm on a single GPU, but their performance will not be optimized and rendering times will not be significantly reduced. It is therefore recommended that you spend the money on a trusted cloud rendering service and let its powerful systems render your work in minutes with just a few clicks, rather than waiting for hours on a local computer to do so.Fox Renderfarm has a team of staff experienced in the field of computer graphics. With professional services and industry-leading innovation, they provide cloud rendering services to a wide variety of entertainment studios and animation studios from over 50 countries and territories. Fox Renderfarm offers cloud rendering services - SaaS (Software as a Service) - that allow clients to use their applications to render their projects.To build a more secure cloud render farm that better protects the privacy of our beloved customers, Fox Renderfarm has successfully completed MPA’s Content Security Best Practices and officially become a TPN Trusted Partner!Here are some projects that also use Fox Renderfarm cloud rendering services:In terms of supported software, Fox Renderfarm does a good job, roughly speaking, in supporting a wide range of software and renderers. It supports mainstream software such as 3Ds Max, Maya, Cinema4D, Blender. Fox Renderfarm also supports some rendering engines, namely Arnold, Vray, Redshift for GPU rendering. Fox Render Farm is also relatively inexpensive compared to the industry. There is also a free $25 trial voucher available! There is also an Evergreen Program offering even more recharge discounts! Why not give it a try? You'll be absolutely amazed!
More
2022-05-18 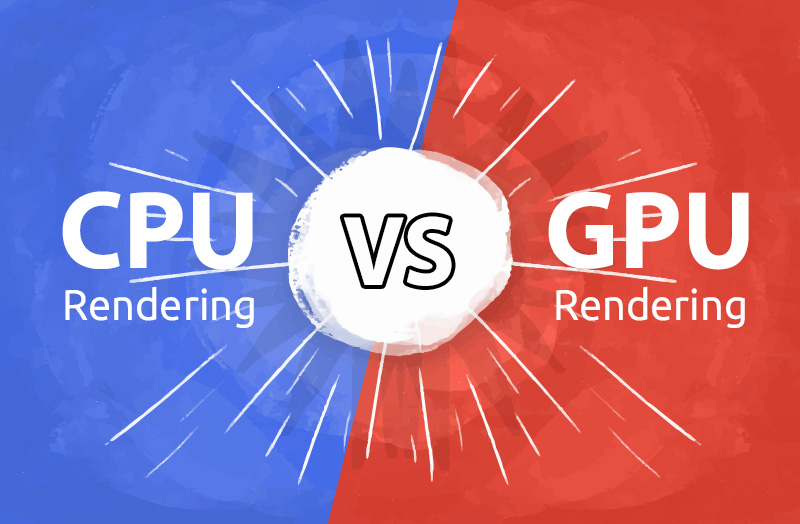 Three Aspects to See the Differences Between GPU and CPU Rendering (1)
The fast cloud rendering services provider and GPU & CPU render farm, Fox Renderfarm will tell you the difference between GPU and CPU rendering. The Background of Graphics CardProbably around the year of 2000, the graphics card was still referred as the graphics accelerator. If something is referred as “accelerator”, it is usually not a core component, just think about Apple’s M7 coprocessor. As long as there is a basic graphics output function you are perfectly fine to access the monitor. By then, only a few high-end workstations and home use consoles could see separate graphics processors. Later, followed by the increasing popularity of PC, and the development of games and monopoly software like Windows, hardware manufacturers started to simplify their work process, which subsequently leads to the fact that graphics processors, or we can say graphics, gradually became popular.The GPU manufactures exist as much amount as CPU manufactures, but only three of them(AMD, NVIDIA, and Intel) are familiarized and recognized by people. To see the difference between GPU and CPU rendering, let's start with the following three aspects. 1. The Functions of GPU and CPUTo understand the differences between GPU and CPU, we also need to first understand what GPU and CPU are signed up for. Modern GPU’s functionality covers all aspects of the graphics display. You might have seen the below picture before, that is a trial test of the old version Direct X - a rotating cube. Displaying such cube takes several steps. Let's think fromabout a simple start. Imagine the cube is unfolded to an “X” image excluded line shape. Then imagine the line shape to eight points without the connecting lines (The eight points of the cube). Then we can go ahead to figure out how to rotate the eight points so as to rotate the cube. When you first create this cube, you must have created the coordinates of the eight points, which are usually represented by vectors, three-dimensional vectors, at least. Then rotate these vectors, which are represented by one matrix if it’s in linear algebra. And vector rotation is to multiply the matrix and vectors. Rotating these eight points equals to multiply the vectors and matrix by eight times. It is not complicated. It is nothing more than calculation, with a large calculating amount. Eight points represent eight times calculations, so does 2000 points means 2,000 times calculation. This is part of the GPU's work — the transformation of vertex, is also the simplest step. But there is so much more than that.In conclusion, CPU and GPU are signed up for different tasks and are applied for different scenarios. CPU is designed with strong commonality and logical analysis functionality to deal with a variety of data types, to categorize a large workload of data and to handle process interruption. All of the above leads to an extremely complicated CPU internal infrastructure. But GPU is specialized in a highly-consistent, independent large-scale data and concentrated computing external environment that can not be interrupted. So CPU and GPU show a very different infrastructure (schematic diagram).Now please follow the best CPU & GPU render farm and cloud rendering services provider to our next part: Three Aspects to See the Differences Between GPU and CPU Rendering (2)").
More
2018-07-30