!Fox Renderfarm Community!Exclusive Interview How a Team of 3 Made an Incredible Short and Won the Draft Selection of the Rookies Awards 2021!RUNAWAYThe amazing short, RUNAWAY, created by Piers Shepherd-Rose, Callum McKay, and Paulina Rybakaitė. The short won the Draft Selection of the Rookies Awards 2021 sponsored by Fox Renderfarm.In our exclusive interview, the dedicated team shared with us contentful details about their creative process. Read more...!Elf Hunter - Hideyuki Ashizawa How to Create a Prometheus-style 3D Character in ZBrushHe dark theme successfully blends a sense of danger and charm. The seemingly discursive design of the pattern seems like you are paying tribute to the style of the movie Prometheus.Elf Hunter is created by Hideyuki Ashizawa. Let's find out how Hideyuki made the amazing artwork through the exclusive interview with Fox Renderfarm.Read more...!Snowman Challenge Create With Fox Renderfarm And Win Big PrizesFox Renderfarm invites all 3D artists to participate in the FGT3D Snowman Challenge to show their talents and win big prizes! 3 Professional artworks and 3 Student artworks will be selected and awarded!TIME FOR ENTRIES: September 27th - December 12th, 2021 (UTC+8)Join our Discord Server and enter the FGT3D Challenge & keep updated!Submit now···!Exclusive Interview How to Make an Adventurous Treehouse in BlenderThe tree house built by survivors out of the remnants of wrecked ships that got lost and crashed down the waterfalls is meant to portray the will of people to not give up and survive, no matter the circumstances.The artwork is created by Florian Linke, an excellent CG enthusiast from Austria. Let’s dig into our interview with Florian and enjoy the creative process altogether.Read more...!The Hunter - Antoine Destailleurs How To Make a Stylized Character For Games in ZBrush and 3ds MaxHave a look at the great design and detail to the armor and human-like body. The Hunter is created by Antoine Destailleurs, 3D Character Artist at Asobo Studio. Here’s the interview between Antoine and Fox Renderfarm, in which we can find out how he created this wonderful 3D Hunter. Read more...!PIXL VISN Media Arts Academy Interview with Robb Innes: Co-founder and Director at PIXL VISN Media Arts AcademyRobb shared his journey in the VFX and animation production education and his advice to CG students and practitioners about how to gradually improve professional skills and go further in the career path.Read more...

The Journey of Creativity Exploration With Fox Renderfarm

Interview With Leonard Daly, Creating A New Future Of WebsitesWeb-based 3D multi-media is becoming an important part of many websites. 3D on the web offers the advantages of seeing the information from a variety of viewpoints in a manner not possible with other media types.!Leonard Daly As a 3D/VR Systems Architect, Leonard Daly has made many contributions to the 3D multi-media industry. He founded Daly Realism in 1996, which can help businesses with project management, website development, secure business-to-business communications, elearning, and web-based 3D and multi-media content.!Daly-Realism Fox Renderfarm was honored to have an interview with Leonard Daly in SIGGRAPH 2019.Interview With Leonard DalyFox Renderfarm: Have you meet any challenges during your development of Daly Realism?Leonard: The biggest challenge today on Xseen...read more→ 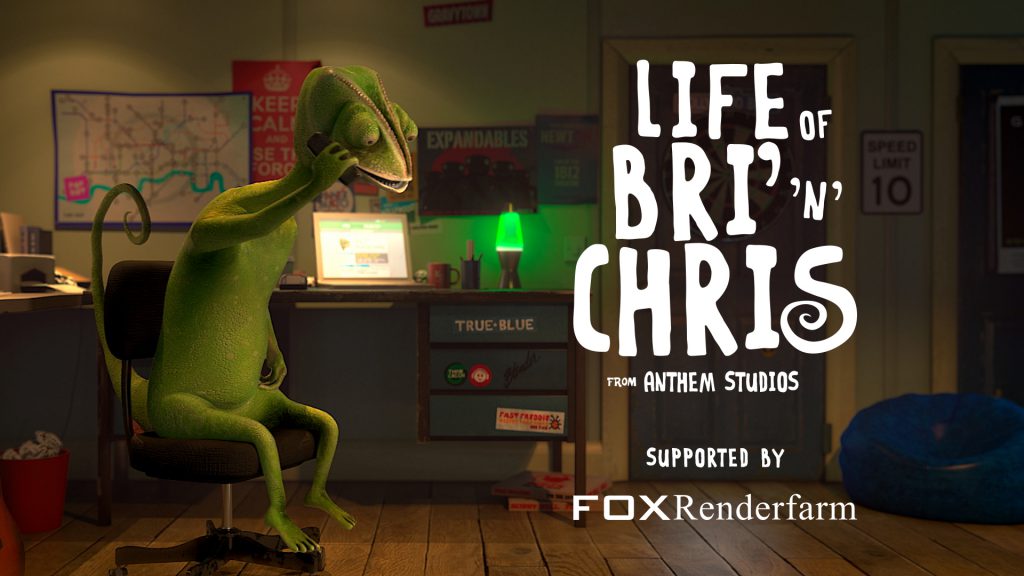 Continuous effort will always bring substantial results. So does the 3d short animation: Life of Bri’ n Chris. Although with limited human resource and budget, Anthem studios tried their best to solve the tough difficulties and finally released the 8-minutes 3d animation. Great congratulations to them. And thanks Michael Wakelam so much for offering the opportunity for the short interview between Fox Renderfarm and Anthem Studios as below.Fox Renderfarm: Hi Michael, would you please give a brief introduction about yourself and your studio?Anthem Studios: My name’s Michael Wakelam and I founded Anthem Studios in 2012 with a vision to bring entertaining stories and new characters to life. We’re based in London and work in a variety of styles using various software.Fox Renderfarm: So when and how did you get into the CG industry?Anthem Studios: I started through TV design and then got into motion design and branding. I started to develop more knowledge and interest in visual effects and animation and then as I grew in experience, I really wanted bring my love of stories and characters together with animation.Fox Renderfarm: Wow, sounds great, then what is your most satisfied work in these years and why?Anthem Studios: I’m most proud of Life of Bri’ n Chris, because it was so ambitious as a project. Most short films of this length have a huge crew, ours was a core crew of 7 or 8, with a bunch of other people helping out in little ways. We had no budget but had generous support of a few key partners, such as Fox Render Farm, Chaos Group and Adelphoi Music.Fox Renderfarm: That's amazing, while since your new short film Life of Bri’ n Chris is going to be online soon, would you please share with us about what’s the story and why you come out the idea of making this film?Anthem Studios: The film is a comedic tale of Bri’, a scottish Common Lizard, and Chris, a hapless Australian Chameleon, whose overly competitive attitude leads to a crazy accident. When I was growing up in Australia, we had these lizards called blue tongue lizards that we would catch, but when trying to outrun us kids, they would drop their tail. I found out a few years back that Chameleons are one of the only species of Lizard that can’t drop their tail in self defense. I though it could be a funny idea and developed it further.Fox Renderfarm: Really interesting experience : ) For making the short film, what 3D software, renderers and plugins used for it? Do you have any preferred one and why?Anthem Studios: For modeling and animation we used Maya, rendering we used Vray and for compositing we used After Effects. Maya’s main attraction was it’s robust referencing system, and Vray is an outstanding renderer. I used After Effects because I was doing the compositing myself, and that’s the tool I knew best.Fox Renderfarm: Haha, you guys are real professionals. While what difficulties you met when making this short film?Anthem Studios: The biggest challenge for me was learning producing and production management. The number of assets and shot was more than I’d ever handled on short form branding and advertising, so it was a steep learning curve for me. The other challenge was the technical side of render ‘render wrangling’ and file management.Fox Renderfarm: Em, really happy that you guys solved all of the problems. So where would you plan to submit/release the video? Any interest for battling for some 3d animation awards?Anthem Studios: We’ve already screened at a few festivals, but want to be seen by the widest audience possible, so decided to release the film online.Fox Renderfarm: Sounds great : ) We'd like to ask why choose Fox Renderfarm as the partner and what you think about us in the rendering phase?Anthem Studios: I had used Fox before I started this project and what always stood out to me was the service. To have people available 24/7 on skype has always been so valuable. We all know that late nights can be a regular occurrence in this industry, and often we can’t wait until the next day to solve a problem, and no one else offers the service you offer.Fox Renderfarm: Thanks so much for your compliment : ) Do you have any thought for making the next short film?Anthem Studios: I’ve started looking at developing Life of Bri’ n Chris into an animated sitcom. Because it’s mainly set in one room like a traditional sitcom, we could get a very high quality render, which would be unusual for TV animation. I’m also continuing to write and develop other stories, live action and animation, so stay tuned.Fox Renderfarm: That's really a great news, we are looking forward to the next video. OK, is there anything else you would like to add or say?Anthem Studios: I’d just like to thank Fox Render Farm once again for your support throughout the project. I couldn’t have done it without you.Fox Renderfarm: Thanks, it's our pleasure, and hope we can have more cooperations in the near future. And thanks for your time to take this interview.

"Malaysian Flick ‘Ribbit’ to Premiere at Niagara Fest. The rendering part of this cartoon movie has been done by Fox Renderfarm which belongs to Rayvision Inc."Ontario, Canada’s Niagara Integrated Film Festival (NIFF) is taking place June 19-22, showcasing a hand-picked selection of films from around the world. One of the premieres that will be featured at the event is the global debut of Malaysian animated film Ribbit from KRU International’s Kartun Studios. The film stars Sean Astin, Russell Peters and Tim Curry and will be screened in 3D on June 21.Ribbit centers on its titular frog hero who is a bit of a dreamer who doesn’t fit in with the other frogs. To escape from reality he hangs out in his “clubhouse,” a downed, dilapidated plane in the jungle, and reads about animals who have no trouble finding their purpose in life in old copies of National Geographic.Written and directed by Kartun’s chief creative officer Chuck Powers, the CG film is “a beautiful heart-warming adventure” aimed at the whole family. Ribbit is the first feature length project from the studio and has already been sold to over 80 countries worldwide, including the U.K., Germany, Australia, Japan, China and Brazil, which will likely see releases in the fall. KRU currently has five 3D animated films and three animated television series in development.The post from http://www.animationmagazine.net/features/malaysian-flick-ribbit-to-premiere-at-niagara-fest/