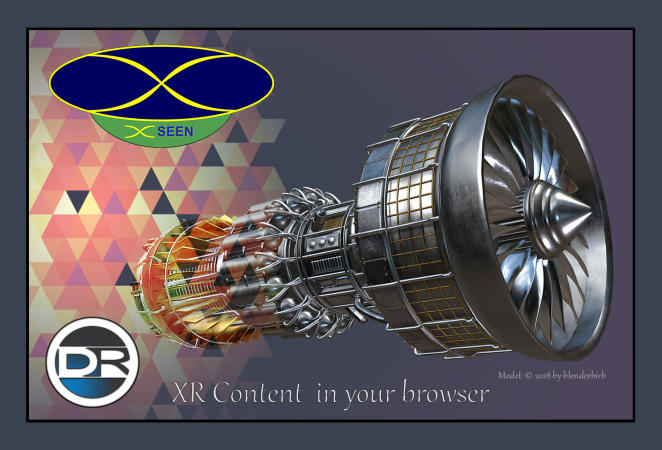 Interview With Leonard Daly, Creating A New Future Of Websites

Web-based 3D multi-media is becoming an important part of many websites. 3D on the web offers the advantages of seeing the information from a variety of viewpoints in a manner not possible with other media types.

As a 3D/VR Systems Architect, Leonard Daly has made many contributions to the 3D multi-media industry. He founded Daly Realism in 1996, which can help businesses with project management, website development, secure business-to-business communications, elearning, and web-based 3D and multi-media content.

Knowing that the key to a successful project is quality management and leadership, Leonard Daly has developed a number of tools with proven success records for assisting in the management of projects.

Daly Realism’s latest work is XSeen - a VR/3D library in JavaScript that uses THREE.js for rendering. XSeen is the first declarative language for the VR/AR/MR — xR Web. It incorporates the ability to seamlessly integrate HTML with your 3D environment. It uses HTML-like tags and attributes that are fully integrated into the DOM and manipulatable with JavaScript. It works with all of the standard JavaScript frameworks including jQuery and React.

XSeen is also the JavaScript library that implements the XSeen language. It is built on top of THREE.js and other open-source web tools and platforms. It loads all standard web model formats, including glTF, THREE json, OBJ, and others. You can use the THREE editor (local-link) to create scenes that are loaded into and XSeen web page to be displayed in a browser.

Fox Renderfarm was honoured to have an interview with Leonard Daly in SIGGRAPH 2019.

__Fox Renderfarm: __Can you introduce yourself?

Leonard: Hi, I'm Leonard Daly, I'm an independent consultant here in Los Angeles. Daly Realism provides consulting services to small businesses in the area of 3D systems, architecture and data management in the cloud. Most of our work is related to website production and development.

In 3D systems, I've been doing a lot of work with web standards organizations including W3C on the just released and what they call “VR complete” webXR Device API specification. I've also worked with Khronos on glTF, and looking forward to working on their new effort in the e-commerce area. In the past, I've also worked with the Web3D Consortium on the X3D specification.

Fox Renderfarm: Can you introduce your latest development to us?

Leonard: In conjunction with SIGGRAPH this year, version 0.8 of Xseen was released. Xseen is a library written in JavaScript. It is fully open source, including open source documentation that runs in the browser. It takes code that looks very much like HTML and allows you to display 3D content. It runs in the phone, on the desktop, in the tablets and it gracefully degrades depending upon the hardware and support available. So that on the phone you have full access to the orientation sensors and the camera, while on the desktop it's a more fixed environment, more suitable for working with the mouse.

There’re two demos available, both are available through QR codes. The top, the first one is a VR demo. Its complete environment there is computer-generated background and model; and the second QR code is the same model presented through your phone to see wherever you happen to be.

Fox Renderfarm: Can you introduce your team?

Leonard: Xseen has been under development for about two years. At this stage is just myself with a couple of other contributions from other people interested in it. This show has been productive and I've talked to at least three people. One has expressed very strong interest in developing two portions that will be needed for future releases.

Fox Renderfarm: Have your meet any challenges during your development?

Leonard: The biggest challenge today on Xseen has been adjusting the model lighting to match the scene in incorporating various mechanisms. It hasn't been incorporated yet but the current under-development version is using spherical harmonic lighting which is very easy to manage, collect and project into the scene, and just light the model. Due to the development of Xseen, we will include not only the spherical harmonic lighting, but also integration and simultaneous localization and mapping, or also known as SLAM algorithm, so that the models can be tracked and located in physical space, as opposed to just relative to the orientation of the phone. Other features include fully web componentizing the systems and making sure that everything is fully integrated with the DOM API that's available in all web browsers to HTML pages.

Leonard: My work with Xseen and other 3D applications have been exclusively within the browser. So, I personally have not used Fox Renderfarm, although I have heard of the company. Many of my associates within the Los Angeles Chapter of ACM SIGGRAPH do use render farms for their purposes in episodic TV, movies and advertisements.

Fox Renderfarm: Any other things you want to share with the audience?

Leonard: As a long-time member of Los Angeles Chapter of SIGGRAPH, I wish from all of us to the people of Shenzhen a great day and happy year.