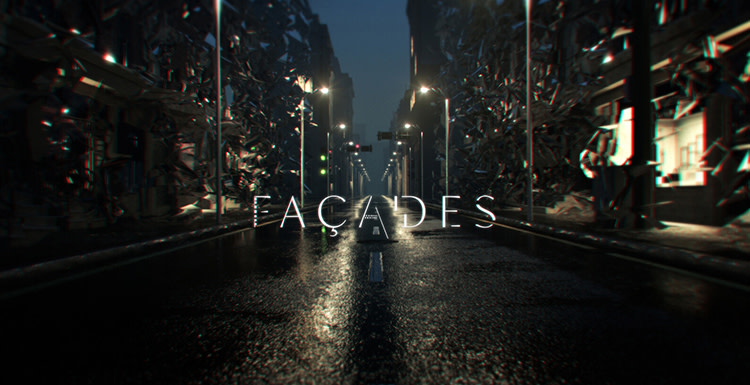 A Visualisation Artist’s Philosophical Thinking in his VFX & Archviz Films

As the British philosopher and author, Alain de Botton said, what we seek, at the deepest level, is inwardly to resemble, rather than physically to possess, the objects and places that touch us through their beauty. Ryan Wai Kin Lam, a Visualisation Artist, explored the beauty through his unique artworks.

Ryan Wai Kin Lam is a Senior Visualisation Artist and Associate Partner in Foster + Partners, a diverse studio with offices around the globe that devotes to the pursuit of sophisticated projects, advanced technology and community development.

Ryan spent nearly 2 months finishing the amazing film ‘Façades’, which portrays the facades of individuals through those of architecture.

He thought that facades hide flaws, failings and – ultimately – reality. In the past decade, the structures surrounding us have been cosmetically overhauled; covering the deeper, economic faults. He tried to find out the parallels between these architectural fronts and the fronts put up by a community through his artwork.

Fox Renderfarm: Would you please give a brief introduction about yourself?

Ryan: I moved to London 11 years ago to study architecture at the Bartlett, UCL. After a few years I switched into a VFX career path; freelancing in roto work and character animation. Then I decided to go into architectural visualisation as my interest in architecture was still prevalent. I currently work at Foster + Partners’ film team; directly involved in the whole film pipeline from concept art through to the edit.

__Fox Renderfarm: How do you feel about being nominated for The CGarchitect Architectural 3D Awards? __

Ryan: Extremely honoured as I don’t feel I have reached the top yet. Even when I won this same category in 2018, I still felt way behind many people and companies I look up to. It’s certainly a good start for my self-improvement.

Fox Renderfarm: Why did you select ‘Façades’ to participate in the competition? Technically and visually, what is your favorite part of this film?

Ryan: I try to do one VFX and Archviz film a year; so naturally this was the film for the category. Though I never do a film specifically for joining any competitions.

My favourite part was working with other people that are more creative in areas which I am not; which was scriptwriting and music composition.

Fox Renderfarm: What’s the inspiration for the amazing film ‘Façades’? And could you give a brief introduction to the story?

Ryan: In Archviz films, I feel the look of the film sometimes matter more than the actual story itself to the public and client. I find that quite sad but it’s also the true nature of our work; it’s a difficult task balancing a good story and selling that to a client / public.

As for using facades as a metaphor, I live in London where building refurbishments are almost always retaining the old buildings beneath a new façade.

Fox Renderfarm: ‘Façades’ has many demonstrations with words, like the quotation of Alain de Botton at the beginning and the narration through the whole film, would introduce each one of them and tell us and the reason why you use them?

Ryan: The reason was quite simple. It was very difficult to convey those messages by visuals alone; at least in a very direct sense. Alain de Botton’s work has always followed me so quotes from him come instantly. As for the narration; it was written and voiced by a great friend of mine to help further explain my thoughts with original lines.

__Fox Renderfarm: What elements in the film and techniques did you use to assist the storytelling, and strengthen the ambiance of the artwork? __

Ryan: One technique I’ve been using recently is to play a BPM counter to edit my storyboard in Premiere for the first draft. That way I get a sense of rhythm and can plan scenes much better even before the music is composed.

Fox Renderfarm: For details, the triangular glass-like pieces play an important role in the whole film, what is that? And any ideas behind that?

Ryan: I wanted something sci-fi to generate the transition of the facades, rather than the usual slice planes or particles seen in most Archviz films. Halfway through I realized it looks like a copy of Doctor Strange’s mirror dimension, but I kept it anyway!

Fox Renderfarm: We noticed that the background music is also made by you? Could you tell us a bit about this song? And what’s your ideas behind the editing of the music and the film?

Ryan: Editing and music convey most of the emotional impact in any film. So, it was important for me to be hands on in those aspects. My music skillset is very basic as I can only start a small composition idea on the guitar or piano. Thankfully my wonderful mother is an amazing music composer, so she wrote half of it and made sure the whole song mixing was coherent.

Fox Renderfarm: What software, renderers, plugins did you use in this work?

__Fox Renderfarm: What’s the most unforgettable and interesting part of the creation process? __

Ryan: Editing and music composition; but only because the creative process is relatively new to me.

Ryan: As with every personal project; it’s about putting in the hard work. There are always aspects of any work that will be tedious to do. A lot of people assume that personal projects are fun and easy to do because you’re passionate about it; but it’s not always that way. Not a lot of people can understand that. It’s about pushing through the menial tasks to finish the fun parts.

Fox Renderfarm: What’s your latest achievement, and the project that you most proud of in Foster + Partners?

Ryan: Some of my favourite projects aren’t public yet unfortunately; though I can recount some published ones that I am proud of. The Chicago airport competition film being one of them; I thought the film was much stronger visually than our competitors.

The Nissan and Mars projects were also fun to do, always nice to work on something different from architecture.

Fox Renderfarm: For you, as an outstanding architectural visualization artist, you are also a music compositor, what do you do to keep curious and motivated? And what do you do to enhance your professional skills?

Ryan: Motivation is extremely easy to find in the social media age. For example, when I create a matte painting that I’m proud of, my ego rises for 5 minutes only to be shot back down after looking at Pedro Fernandez’s constant amazing work. It’s the same with other aspects of filmmaking from storyboarding to rendering. I find it very difficult to stay egotistic when there are all these amazing artists that I need to catch up to.

I don’t have any secret on enhancing my skills other than just trying to work as hard as I can to improve. There’s a good quote from Christoph Niemann that goes “Every athlete, every musician practises every day, why should it be different for artists.”

Fox Renderfarm: Who or what project inspires you the most? What school of thought do you adhere to?

Ryan: Difficult to point out as it changes every week. On the top of my head = Sava Zivkovic for his personal film projects, Ash thorp for his art direction, Thomas Dubois for concept art.

They all put it in the hard work with their personal works and it shows.

Ryan: Check out the community group ‘Women in arch viz’ on Facebook.