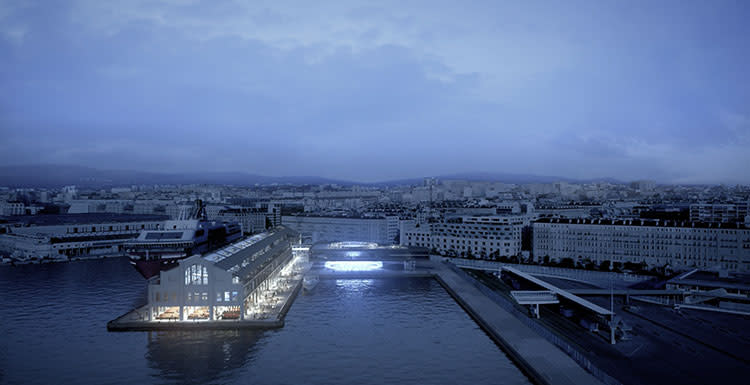 Ocean is not only the origin of countless natural resources that raise and nourish all humankind, the underwater world has always been a root of curiosity and inspiration for many artists, from Twenty Thousand Leagues Under the Sea in literature, to Jaws in movie creation. In the Film (Commissioned) Category of CGarchitect 3D Architectural Awards, the nominated artwork J1 L'Odyssée, Naissance d'une Cité Subaquatique (hereinafter J1 L'Odyssée) is a breathtakingly beautiful ArchViz short film featured the underwater world as its theme.

Fox Renderfarm is so glad to have a talk with Uros Vukovic, General Manager for DIORAMA, in which he revealed how the team had made the ambiental underwater scenes and the calm architecture views into reality in Cinema 4D. And he also shared with us the inspiration behind the name of the studio - DIORAMA, and their development vision for the future.

The nominated short film depicts the Mediterranean atmosphere that exists only in Marseille, combining architecture and nature. The breakdown video below gives us a closer look at the creation process of the amazing short film. Let’s enjoy the video and interview.

Fox Renderfarm: Hi, Uros, would you please give a brief introduction about yourself and your company?

Uros: Interested in the visual presentation of architectural projects, I started with DIORAMA in 2016 working on physical models and artistic installations. Meanwhile, I've been practicing architectural visualization through different media that brought me to the position of Animation Director and General Manager in the motion department of DIORAMA. DIORAMA is a studio based in Milan and Paris founded in 2016, currently counting around 30 artists. From the very beginning, we were heading toward different aspects of production always testing new media and trying new approaches, still rendering, motion, VR, and physical space.

Fox Renderfarm: How do you feel about being nominated in The CGarchitect Architectural 3D Awards?

Uros: 3D Awards is a great example of how fast the CG industry develops in architectural presentation and clear description that architects are capable of using media and transforming them according to their necessities but in their own, general perception. Therefore being nominated was a huge honor for us, meaning that our style is acceptable in such a community.

Fox Renderfarm: Why did you select this artwork to participate in the competition? Which part of the film do you like the most?

Uros: Selection of J1 L’Odyssée for 3D Awards comes from an intention to present our style and achievements we made in past years but still keeping in mind that the competition was merely for architectural visualization, therefore the selection of our work was an easy job. We have decided to compete in commissioned selection as the best way to express who we are and what we do, especially in relation to the client-based projects. This year we have selected J1 L’Odyssée, calm and very Ambiental film allowing us to technically try this specific way of production, therefore the part of the film starting with dusk mood brings additional calmness and culmination on the aerial view of the city, when the music stops and all attention goes to the Mediterranean atmosphere that exists only in Marseille, combining such an architecture and nature.

Fox Renderfarm: What's your inspiration for this amazing film?

Uros: Inspiration for this film comes from reading Christopher Booker explanation based on Jungian analysis, also David Lynch's workflow for creating personalities, the Seven Basic Plots, and Enneagrams combined together. We have been deeply inspired to bring personality in a technical film. In certain scenes, one should find himself almost hypnotized by watching the environment, architecture, and nature. Even though the mere existence of architectural films is for the sake of demonstrating artificial appearance, we tried to say that the public has the right to enjoy its visual sensation. At the same time, the task became ambiguous as we still had to consider one-sided technical requests by the client.

Enneagram of Personality (Image from Google)

Fox Renderfarm: About the breathtaking scenes of the ocean and underwater city in the film, did you refer to any specific books or movies?

Uros: Speaking about the ocean the inspiration comes from the film Le Mépris, directed by Jean-Luc Godard, especially the scene with the vast sea and villa showing the fight of natural and artificial crashing one into another. This had an influence on thinking of different worlds, which ended as natural above and artificial under. Considering underwater scenes there were not so many inspiring references as just imagination of an underwater life was already enough abstract to be very inspiring, therefore that part was well defined from the very beginning.

Fox Renderfarm: The incredible project demonstrates a harmonious integration of the sea and the sky, of the history and the future, and of the nature and humankind. What special elements in the film or techniques did you use to illustrate that?

Uros: Understanding what elements are merging together brought a middle relation as a solution. Speaking about scenes such as the ending one, the sea and the sky, sometimes have a middle link as of water, either rain or clouds or fog, the substance is the same. As the project contained two parts, one old warehouse which had to be restored and the other connecting part, the aquarium, we proceeded with lights and colors, this scientific cobalt glowing blue and desaturated yellow was the relation of future and past, nature and humankind. There were two parts of the film, one in the aquarium, which was obviously blue, defining at the same time nature, while entering into the warehouse was defined by that desaturated yellow and at the same time livable light color presenting the life.

The aquarium @ J1 L’Odyssée by DIORAMA

The warehouse @ J1 L’Odyssée by DIORAMA

Fox Renderfarm: How long did it take to finish the work?

Uros: This was one of the fastest films we have ever produced, considering the number of people working on the project and the deadline we had. The preproduction phase, building the storyboard, mood board and going forth and back with previz and client took at all one week, while the production phase took 15 days.

Fox Renderfarm: What software, renderers, plugins did you use in this work?

Uros: The whole animation was rendered with Cinema 4D and Redshift, additionally, we used Agisoft 3D Scanning for the island at the beginning. People were animated with AXYZ anima and Mixamo, we used Marvelous Designer for cloth simulation, After Effects and Premiere Pro for compositing and post-production.

Fox Renderfarm: What's the most unforgettable and interesting part of the creation process?

Uros: The most interesting part of the production was definitely building the story and finally putting all together with the music composed especially for this purpose by the great artist Iz Svemira. In 3D it was making an underwater world, modeling and rigging fishes.

Uros: The most difficult part of the production was the fluid simulation, which at the end was not in the film due to a very short deadline. Probably, we will show it once in the future through the breakdown. As a substitute, we had to make 3D displaced surfaces with an amazing free plugin called HOT4D and additional work in post-production.

Fox Renderfarm: Could you briefly introduce the inspiration behind the company name - DIORAMA?

Uros: DIORAMA is named this way from the original invention of Daguerre, today disappeared, working as a mental space to be reactivated running researches, experiments and collaborations.

Fox Renderfarm: What's the development vision of your company?

Uros: As we started not so long ago Diorama is growing very fast and the idea is to keep this exponential line as much as possible. Our main goal is to keep exploring and experimenting that will bring new ideas and possibilities to soon establish new ways of conceptual architectural films, and maybe try some other directions of visual presentation.

Uros: We have tried Fox Renderfarm recently, rendered a coupe of animations and the scene from J1 with Cinema 4d and Redshift in the resolution of 17,000px as a billboard poster. Even though we have been very skeptical as we had the experience from the other render farms especially with such high resolution, we were surprised that the image was successfully rendered without any problems on GPU based platform. The website seems very well organized, and the farm quite affordable.

Uros: Keep exploring, and be productive!

Get A Ticket & Visit SIGGRAPH Asia 2022 in Daegu