As soon as Nintendo Switch launches Animal Crossing: New Horizons, it has been loved by game fans all over the world. Due to the epidemic, many people can enjoy traveling abroad through games during quarantine, which makes the Switch a hit again. And many CG artists eager to create many fan art or amazing creations. Korean designer Seungho Jeong (Neon3D) was invited to talk about his latest work "Miniature style cute character 3d artwork" (Soondol) and talk about the toy model made for the animation of "Molang".

Seungho Jeong, from South Korea, is good at product design and 3D printing. Most of them are created in Fusion360 and Blender. He is currently designing toy models for "Molang". He also runs a YouTube channel to share the process behind the scenes.

Tell us about the artwork.

Seungho Jeong: Recently I was playing Animal Crossing: New Horizons, and I was attracted by the cute graphic style in the game, so I proposed a series of creative projects, with my original character "Soon-dol" as the main character, and designed a series of The miniature style house in Mori.

I use Cycle render in Blender to create. It is worth mentioning that instead of using texture mapping, I changed the color of the object or made some images using Illustrator, and used Blender's Shrinkwrap modifier to place the image on the character's face. The most difficult part of this work is the lighting effect. After all, to create "emits natural light from the outside of the window" is a test of the creator's Lighting skills. At first, I put a glass on the window, but then I found that no glass looks more natural, so I had to take it away.

What is your usual job?

Seungho Jeong: Mainly making character toy models. For example, the "Molang" series is currently on sale. I designed many different sets of costumes for the character, including Halloween, New Year, Hanbok and other styles. The main creative process is the use of product design software Fusion 360. It has a free-form modeling function, similar to Blender's modeling method.

I also made an introduction video for the company's YouTube channel "Behind Molang". First, I redesigned all 2D characters into 3D. Since our company is not an animation studio but a character commodity company, most of the 3D creation process of characters is the process of making plastic models, such as Fusion 360 (some are designed directly in Blender). When creating images in 3D, as mentioned above, instead of using texture mapping, we change the color of the object or use Illustrator to create the image, which is created in accordance with the process of making dolls and doll models.

Is animation different from product design?

Seungho Jeong: Making animation is very difficult, after all, that is not my major. Although product production and animation look very similar, there are still some system differences. Therefore, I have to learn by myself and complete the animation creation, so I simplified the character movement as much as possible.

Seungho Jeong: If you want to create on a hard surface, Fusion 360 is recommended, which can be modeled for the accuracy of the size, which is very convenient. In addition, the ShrinkWrap modifier is used to attach the image to Blender without any texture drawing.

Who is your Favorite artist?

Seungho Jeong: Absolutely my boss Hye-Ji Yoon, he is the character designer of "Molang". And Molang's animation is currently being played on Netflix, which is receiving the attention of the global audience! I respect my boss very much and want to be a well-known creator like him.

Fox Renderfarm is a leading cloud rendering services provider and render farm for 3D animation. We offer a free $25 trial for every new user. Thanks for reading! 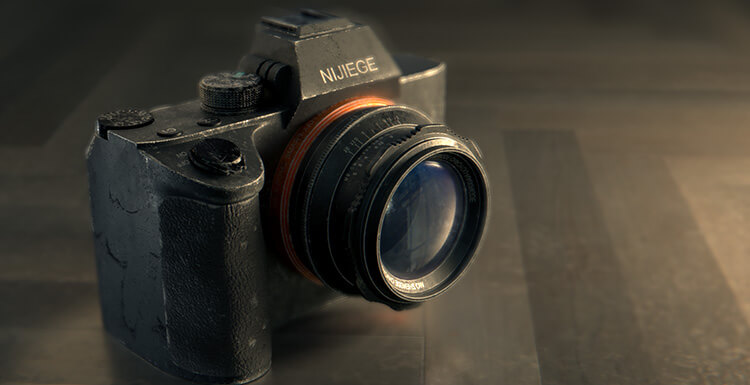 Free Cloud Rendering For 3D Software
Do you like to make 3D models or 3D animations? If you are a user of 3D software, such as Blender, Maya, 3ds Max, Cinema 4D, etc., then you should know the importance of rendering for a 3D work. Cloud rendering, on the other hand, can help you render your work in the cloud without taking up your own local computer space, making your work more beautiful and full of details. Are you looking for free cloud rendering? If you are a Blender user, then congratulations, there really is a free Blender cloud rendering. Please read the following section.- What is Cloud Rendering or Cloud-based Rendering?- Top 10 Free And Best Cloud Rendering Services in 2022 Free Cloud Rendering - SheepIt Online Render Farm!SheepIt - Free Blender Render FarmWe all know that if you want to do cloud rendering, then you need to have a lot of servers in the first place, and it costs a lot of money to buy them. So why is SheepIt a free cloud rendering service provider? Although it doesn't have its own servers, it is using users' computers to help other people render, which means that the more people are willing to provide their computers for others to render, then the more servers SheepIt has for cloud rendering, and the power of this online render farm free is almost unlimited.!Free Cloud Rendering For 3D Software 2from SheepIt SheepIt was launched in 2008 and has been rendering a project almost every 5 minutes for the last few years. It supports almost all versions of Blender, after all it is a free cloud rendering for Blender. On July 1st, SheepIt reached the important milestone of achieving 500,000 project rendering, so to celebrate, 2,000 points will be given to everyone (who renders frames) and this campaign will end on Monday, July 11th at 00:00 UTC+0.In normal times, if you want to use this free cloud rendering for Blender, then you need to share your computer to get the points, these points will be the basis for your rendering, the more points you have, the higher your project priority will be.So if you are not a Blender user, is there a free cloud rendering service or a free online render farm? The answer is almost none. However, even if not completely free, there are some large render farms that offer good cloud rendering services and have free render coupons available, such as Fox Renderfarm. Best Cloud Rendering Services Provider - Fox RenderfarmFox Renderfarm, the leading cloud rendering service provider and render farm in the CG industry, supports not only Blender, but also many other 3D software and plugins. Also, unlike SheepIt, Fox Renderfarm has a 7×24 real time service, so if you encounter any difficulties while rendering, the technical support is always available to help you remotely. It has a very reasonable pricing, which is very cheap among the render farm prices. What's more, there's a $25 trial available, as well as other 3D challenge that can help you get free rendering vouchers, such as the monthly FGT Art campaign that gives participants a $20 rendering voucher and the winner of the month a $100 rendering voucher! If you are a loyal Fox Renderfarm user and love 3D creation, we would like to help you realize your dream and help you render your own 3D masterpieces, just like the great CGI Artist Kay John Yim did.- Ballerina: A CGI Fantasy Created by Kay John YimIn addition, Fox Renderfarm is a TPN-Accredited cloud rendering services provider and CPU & GPU render farm. This means that it is extremely secure and you don't need to worry about your data being revealed at all. ConclusionIf you are a Blender user, then you are lucky to have a cloud renderer like SheepIt that offers free rendering. However, if you are a user of other 3D software, you can also use Fox Renderfarm, the leading cloud rendering services provider and best render farm for 3D software, which offers a $25 free trial for each new user.
More
2022-07-05