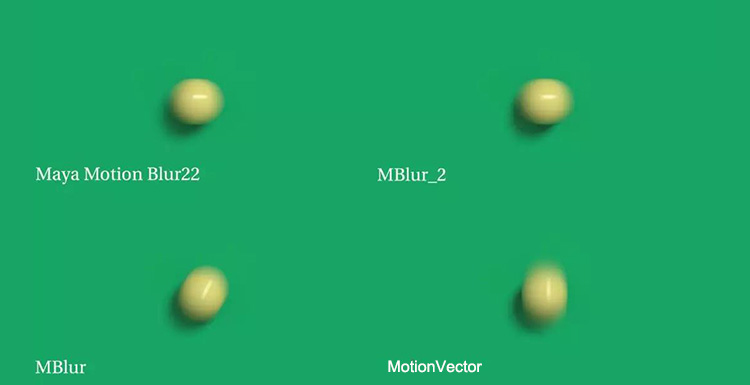 Yesterday, I found that the Arnold of Maya 2018 has a directional error for the motion vector blur method made in the AOV channel. The motion blur method I wrote earlier applies to Maya 2016 and earlier versions, so I spent a little time studying it today. The problem has been solved now, and cloud rendering will use a small case to explain the production steps.

Step 1: Creating the ball as a simple animated scene. 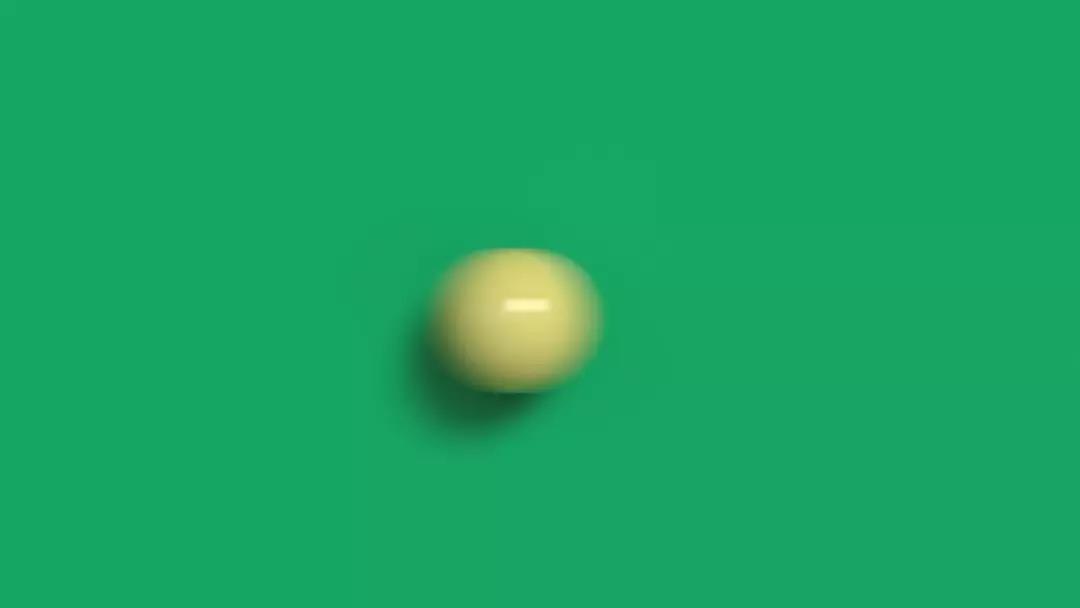 Step 3: Follow the method given in the official Arnold documentation: Change the camera's Shutter Start and Shutter End to 0.5 (why changed to 0.5 because my motion blur type is Center On Frame). 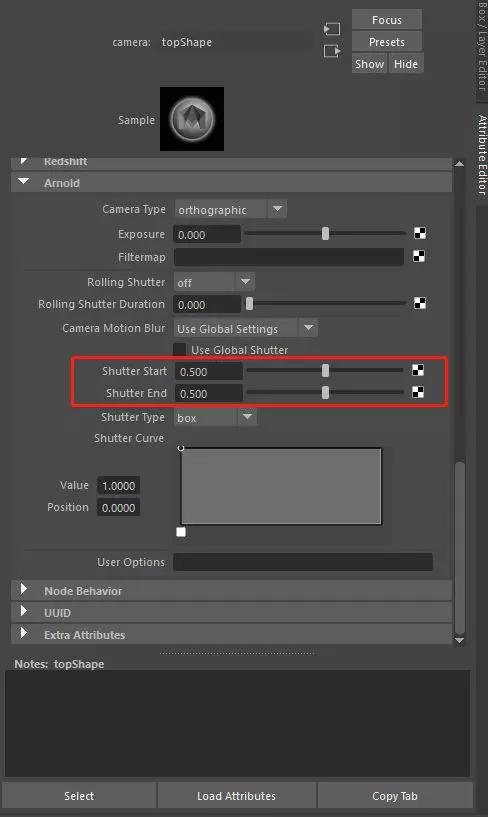 The first is the motionvector channel that comes with Arnold.

The second is to use the custom motion vector AOV of motion vector shader (giving the aiMotionVector material in the AOV channel).

Cloud rendering note: MBlur is named according to your preference. The setting of aiMotionVector was wrote in the previous article.

It can be seen that both the motionvector and MBlur motion blur channels in our AOV channel are in the wrong direction.

Step 6: Next I will officially explain how to solve this problem: From the beginning.

A: Turn on the Motion Blur button in the render settings: I chose the Center On Frame mode here.

B: Change the Shutter Start and Shutter End in the camera Arnold attribute to 0.5, respectively, corresponding to the Center On Frame mode.

(Note: When rendering the motion vector AOV, the camera Shutter Start and Shutter End should be the same value.)

C: Create a new MBlur_2 channel in AOV (to compare with the previous MBlur.) 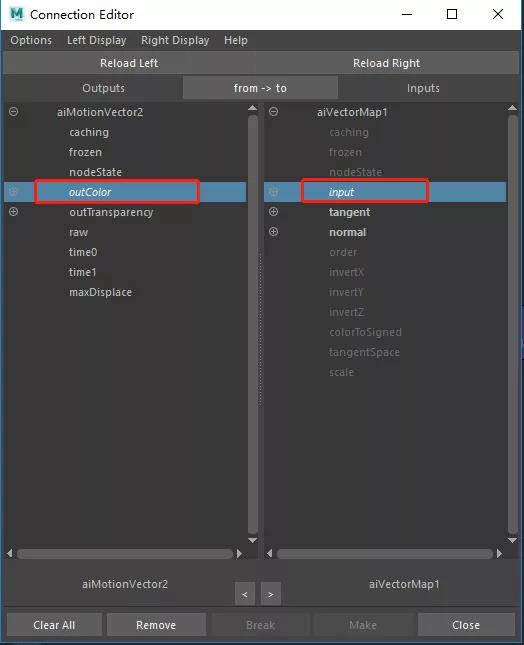 2) Then connect the outValue in the aiVectorMap node to the DefaultValue in the Shader property of the MBlur channel in AOV. 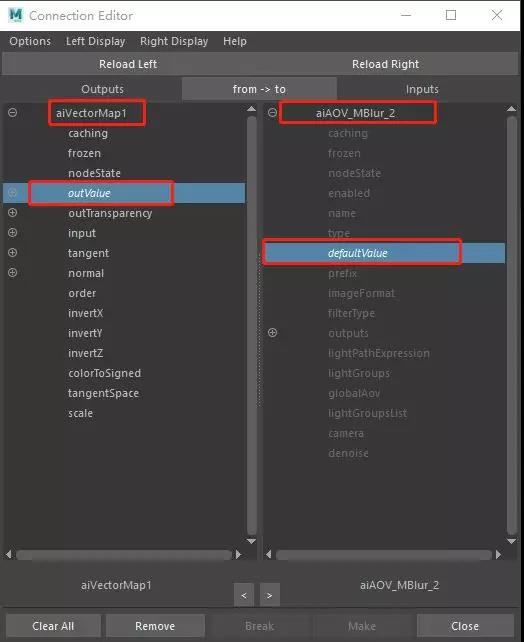 Change the XYZ mode of the Order in the aiVectorMap node to YZX mode and remove the hook of the tangentSpace. 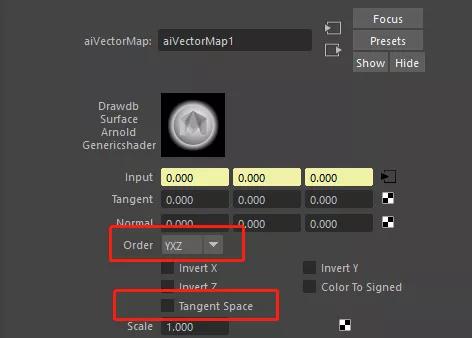 E. After the above steps are completed, start rendering the image and view it in Nuke. 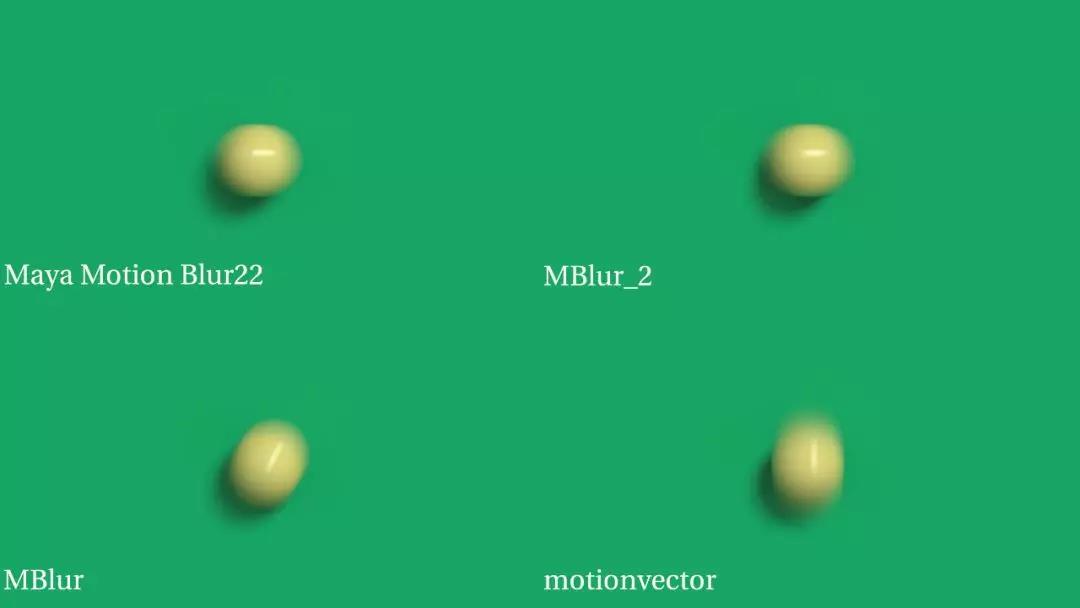 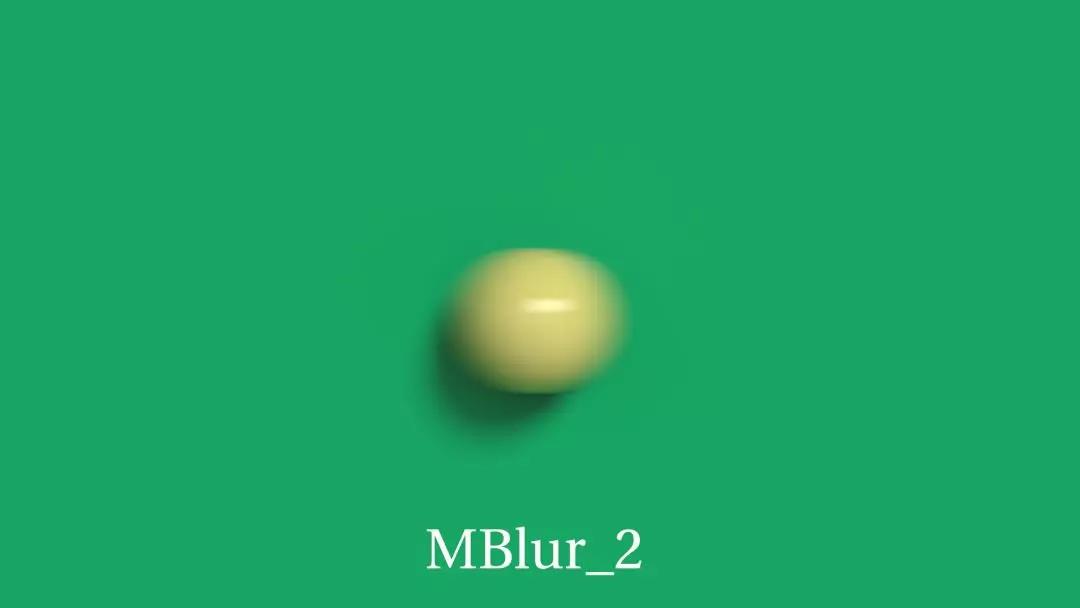 Fox Renderfarm hopes it will be of some help to you. It is well known that Fox Renderfarm is an excellent CPU&GPU cloud render farm in the CG world, so if you need to find a render farm, why not try Fox Renderfarm, which is offering a free $25 trial for new users? Thanks for reading!

Previous: The Method to Make LightGroup of Arnold 5.1

Next: The Usage of Maya 2018 Attribute Spread Sheet

The Benefits and Disadvantages of Cloud Rendering
You should know what cloud rendering is, and in this article, the best cloud rendering services provider and CPU & GPU render farm will introduce you to the benefits and disadvantages of cloud rendering.- What is Cloud Rendering or Cloud-based Rendering? The Benefits of Cloud Rendering 1. Fast RenderingThe distributed rendering of cloud rendering allows multiple servers to be put online for rendering, which greatly increases the rendering speed. 2. Batch RenderingCloud rendering can render multiple files at the same time, multi-tasking and saving a lot of time, which is not possible with local machines. 3. Free up Local SpaceAs we know, rendering sometimes takes up all our local computer space, which is not only slow and stuck, but also burns up some machines with bad cooling, greatly depleting the life of your local computer and increasing costs.When your job is successfully submitted to cloud rendering for rendering, your 3d max software can be closed and your local computer can be shut down. By handing the job over to cloud rendering, the local computer is freed up, reducing wear and tear while you continue to model, draw and complete other tasks. 4. Always AvailableSimply log in to the rendering platform and you can fully automatically package and submit your files with one click, upload and download files in multiple lines, and preview your renders in real time to keep track of their progress. 5. 7*24 Hours Customer ServiceIt has a good service. Although users almost help themselves throughout the whole process of using cloud rendering, it is inevitable that they will still encounter problems, and in order to deal with them in a timely manner, most vendors of render farm are equipped with 7*24 hours customer service. Fox Renderfarm also provides 24/7 service. Disadvantages of Cloud Rendering 1. You need to pay, and sometimes the cost price may not be cheap.The more computing resources the cloud rendering platform provides, the faster the rendering speed, the higher the cost.There is no doubt that the cost of rendering in the cloud is much higher than rendering on your own local computer. After all, the cost of cloud rendering itself includes cloud server resources, operation and maintenance costs, and platform operation costs. However, at present, cloud rendering platforms also offer different threads for users to choose from to meet their respective needs for speed and cost. 2. Insufficient support for some plugins and software. 3. If the quality of customer service is poor, you may have a very bad experience of using it. ConclusionA good cloud render farm can be a good helper for your work, why not try using a cloud rendering with a free $25 trial. The only way to know if it's suitable is to try it yourself!
More
2022-05-12

Top 10 Free And Best Cloud Rendering Services in 2022
Fox Renderfarm is the industry's leading provider of cloud rendering services and an excellent render farm. In operation since 2011, Fox Renderfarm has earned a reputation for quality performance, great customer service and flexible pricing plans. With over 20 years of experience, Pioneer's core team serves over 200,000 users and top leading visual effects companies and animation studios from over 50 countries or regions, with clients including multiple award and Oscar winners. It supports both CPU and GPU cloud rendering. Fox Renderfarm supports many 3D software such as C4D, Maya, Arnold, Blender, Redshift and more. Fox Renderfarm now offers a free $25 trial for new registrants. 2. GridMarkets - Redshift Cloud Rendering Services!GridMarketsGridMarkets is a partner of Redshift 3D and provides Redshift cloud rendering service. CPU and GPU rendering are supported. His price is from $0.80/machine-hour all inclusive. 3. RebusFarm - Arnold Cloud Rendering Services!RebusFarm - Excellent Render Farm for BlenderRebusFarm was founded in 2006 in Cologne, Germany. RebusFarm is designed to meet the growing demand for rendering capabilities in the 3D animation field. The render farm is designed to meet the growing demand for rendering capabilities in the 3D animation field. RebusFarm supports all common 3D applications, including host applications, as well as secondary rendering applications. In addition, RebusFarm's goal is to provide the greatest possible rendering power at the most affordable price, while maintaining a service-oriented connection with its customers. RebusFarm offers Arnold cloud rendering services. Each new user automatically receives a free trial of 25 RenderPoints when they register. 4. Chaos Cloud - Houdini Cloud Rendering!Chaos CloudChaos is a world leader in the field of visualization and computer graphics. Chaos creates technology that enables artists and designers to visualize anything they can imagine. Chaos offers the Houdini cloud rendering service, which allows you to easily submit render jobs to the Chaos Cloud directly from the V-Ray for Houdini interface. 5. Garagefarm - Sketchup Cloud Rendering!GarageFarm - Cloud Rendering Blender Render FarmGarageFarm is a small team of technical and 3D enthusiasts who, after years of painful and horrible rendering experiences, decided one day to create their own render farm. GarageFarm allows you to easily upload and manage your projects. He offers Sketchup cloud rendering service and offers a free trial for $25. 6. iRender - After Effects Cloud Rendering Services!iRender - Great Blender Render FarmiRender is a software company based in Vietnam where people, happiness and creativity are at the core of all activities that inspire the company's mission. As a PaaS and IaaS provider, they offer global cloud computing solutions with GPU rental server services for 3D rendering (CPU and GPU remote rendering farms), processing big data or any other GPU intensive tasks. iRender has different prices depending on the GPU and CPU servers. iRender also offers after effects cloud rendering services.Related text: The best After Effects cloud rendering 7. VFXFarm - CPU & GPU Cloud Rendering Services!VFXFarmThe VFXFarm story started when traditional cloud rendering companies couldn't meet their needs. VFXFarm offers an awesome user experience, a user-friendly interface, beautiful positioning, color management, applications from websites to Windows and Mac, automatic synchronization of cloud rendering project output, and much more. He offers both CPU and GPU cloud rendering services. 8. RenderShot - KeyShot Cloud Rendering Service!RenderShotRenderShot is a KeyShot render farm based in Vancouver. It is an authorized KeyShot cloud rendering service provider, powered by a team and community of KeyShot enthusiasts and top industry developers, providing step-by-step solutions for all your KeyShot rendering needs. It is built with powerful GPU and CPU servers that are professionally optimized to enable KeyShot CG artists to render multiple jobs at once without sacrificing quality or time. 9. Conductor Cloud Rendering - Good Cloud Rendering Services !Conductor Cloud RenderingConductor was developed by entertainment industry veterans and SaaS web development experts who share a love of discovering and using the best of cloud technology. At the heart of Conductor is the idea that cloud computing will replace the traditional "render farm". Conductor's platform was developed to achieve the scalability, security, flexibility and affordability required for A-list feature production. They offer a very good cloud rendering services. 10. SheeIpt - Free Blender Cloud Rendering Services !SheepIt - Free Blender Render FarmSheepIt is a free Blender cloud rendering service. It differs from other render farms by the word distributed, as the service does not own the machines that render, but relies on people sharing their computers. As a result, there is almost no limit to the capabilities of a render farm. As project owners add their scenes to the job queue, the service splits the animation into single frames for rendering, sends each frame to a connected computer, and optimizes its selection based on available memory and CPU/GPU capacity. This free cloud rendering service is free of charge. You can earn points by sharing your computer, and these points will give you access to free renders at SheepIt. SummaryFox Renderfarm hopes it will be of some help to you. It is well known that Fox Renderfarm is an excellent cloud rendering services provider in the CG world, so if you need to find a render farm, why not try Fox Renderfarm, which is offering a free $25 trial for new users? Thanks for reading!
More
2022-06-24