Fox Renderfarm Shines Like A Star at SIGGRAPH ASIA 2017 As one of the largest cloud render farm in the world, Fox Renderfarm is highly praised by both new and existing customers at the SIGGRAPH Asia 2017 in Bangkok. So far, Fox Renderfarm has provided rendering solutions for the 86th Academy Award the best animated short film "Mr. Hublot", the best-selling Indian film in the history "Baahubali: The Beginning" and "Baahubali 2: The Conclusion", another top grossing film in the Chinese box office record " Wolf Warrior 2 " and other amazing films such as "Bilal", "Kingsglaive: Final Fantasy XV", "L.O.R.D (Legend of Ravaging Dynasties)", "Throne of Elves" and many more.

Fox Renderfarm booth has been so popular and received many visitors during the exhibition. We are truly overwhelmed by the support from the organizers as well as the attendees. This exhibition not only strengthened the cooperation between Fox Renderfarm and its existing customers but also helped new customers to understand the cloud rendering technology, patiently answered the cloud rendering process and promoted further cooperation.

As of now, VIVUE.io acts as the International Selection Jury Online Review Platform for the 8th China International New Media Short Film Festival.  VIVUE.io has tailored the virtual off-site online review platform for the juries and has received good appreciation from directors such as Paul Brown, Jiang Wenli, Ding Liang, Zhuo Botang and other well-known directors. The CG in China Summit guest speakers mainly shared the development status and trends of CG industry in China, including animation, VR industry, real-time rendering, and animation technology, which provided a face-to-face exchange between experts and scholars from Asia.

Mr. Mike Zheng described on the three stages of CG film industry in China. Through data comparison and case analysis, Mr. Mike Zheng demonstrated the current situation and trend of the development of film industry in China. He explained the whole process of BAT composition to all attendees and also mentioned about the China's film market guaranteed box office issue and box office film distribution characteristics.

At this year's Student Volunteer Session Closing Conference, Mr. Mike Zheng was also invited to attend and delivered a speech about Fox Renderfarm GoCloud program. In recent years, students creative works have gained many appreciations from film and television industry. Fox Renderfarm as the industry leader, in order to unleash CG students’ unlimited potential, Fox Renderfarm has launched a unique GoCloud program to provide support for students who have ideas and creativities without financial ability and technical expertise to realize their dreams. The program includes educational discounts, rendering offers, creative and outstanding project support, technical support, professional guidance, as well as review & collaboration platform and more. Fox Renderfarm can be described as very productive at SIGGRAPH Asia 2017, Fox Renderfarm managed to develop and maintain the relationships with the new and existing customers; VIVUE.io started to gain attention from the industry; CG in China Summit and Student Volunteer Session ended with a unanimous welcome by the attendees and volunteers. The confidence of SIGGRAPH Asia for Fox Renderfarm’s leading position in render farm industry along with the outstanding contribution is the most important reason that SIGGRAPH Asia decides to start such deep cooperations with Fox Renderfarm. And Fox Renderfarm really appreciated the awesome opportunity to present themselves in front of so many international 3D animation and VFX production companies. Let’s take hand in hand to help enhance the development of CG industry.

FGT Art December Winner Announced
Let’s give it up for the FGT Art December winner！ Congrats! The amazing artwork, Nostalgia: Shirakawa-gō(白川郷), is created by our friend Kay John Yim, an excellent Chartered Architect based in London. Who’s our next FGT Art winner? Shine your talent and win great prizes! Hit the link and know more https://www.foxrenderfarm.com/fox-got-talent.html
More
2021-01-14

FGT Art November Winner Announced
Let’s give it up for the FGT Art November winner！ Congrats! The artwork, Twilight at The Battle Gallery, is created by our friend Kay John Yim, an excellent Chartered Architect based in London. And here is the interview between Fox Renderfarm, the powerful GPU & CPU cloud render farm, and the November winner John regarding the other artwork, The Mirage Castle: a Fantasy War Tale: https://www.foxrenderfarm.com/news/making-a-gothic-castle-with-strong-silhouettes-in-cinema-4d/ Who’s our next FGT Art winner? Shine your talent and win great prizes! Hit the link and know more about the FGT Art campaign: https://www.foxrenderfarm.com/fox-got-talent.html.
More
2020-12-09 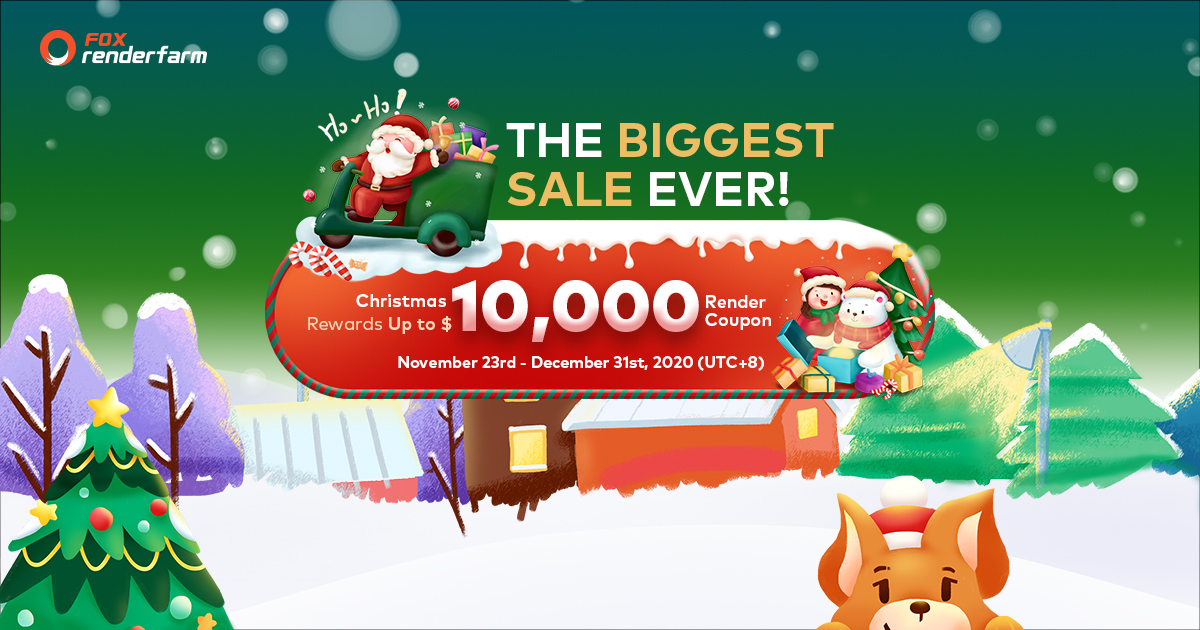