What is the difference between a traditional render farm and a cloud rendering render farm?

What is the difference between a traditional render farm and a cloud rendering render farm?

Generally, a render farm is a cluster of computers used to provide CGI (computer-generated imagery) through a batch processing method. While, a traditional one means building it on your own, which means you need to buy a lot of computers and fix them yourself whenever there is a problem. It is a local render farm, use local nodes.

Cloud rendering render farm, aka cloud render farm, online render farm, is a render centre that you can send your asset and render from far away, they are connected by the internet, “Cloud”, means internet. It becomes a kind of online services for artists to upload their tasks to the services providers, and download their final render results when completed.

However, when render farm is put on the ‘cloud’ it means faster because commercial render farms have better and more high capacity nodes, and some of them provide customer services and TD support for technical issues, like Fox Renderfarm. For eg, you are in India and you use cloud rendering render farm, wherever their servers are in, you still can use their platform to control their nodes to render your files, it can save your local hardware cost. if you don't have a stable render, using a cloud render farm would be much better than build an in house render farm, low cost and higher efficiency.

The advantages of using a cloud rendering render farm,

The top render farm companies can provide thousands of rendering nodes which have powerful CPUs and GPUs, it could definitely save your time on the rendering process.

Compared with the traditional render farm, it would be much more cost-effective especially for a big project. You don't need to spend too much money to purchase hardware and maintain the network, and don't need to hire people to manage it.

Around the clock customer service and technical support could always be a lifesaver if we met any problem when rendering but don't know how to solve it. The professional service team could totally help you with that.

4. Easy to Use Desktop App

Some online render farms have their own desktop app which has a lot of great features, such as drag and drop project submission, preview during rendering, automatically uploading and downloading project etc.

The disadvantages of using a cloud rendering render farm,

Some small render farm will not sign the Non-Disclosure Agreement with customers, so you'd better find some high reputation company who had worked with big producing companies on famous films, if ever worked with OSCAR winners would be the best.

Different people would have different habits, so the more software, render & plugin the cloud render farm supports, the better. And if the online render farm can even support custom's own plugin, it would be a great added-value service.

Putting everything done on cloud is a kind of trend with a high-speed internet connection and large data transmission become more and more available. But the choice between the traditional one and online render farm depends on the needs of the project. But it’s always worth trying the cloud render farms, coz most of them give new users a free trial, like Fox Renderfarm, US$25 free trail is waiting for you. 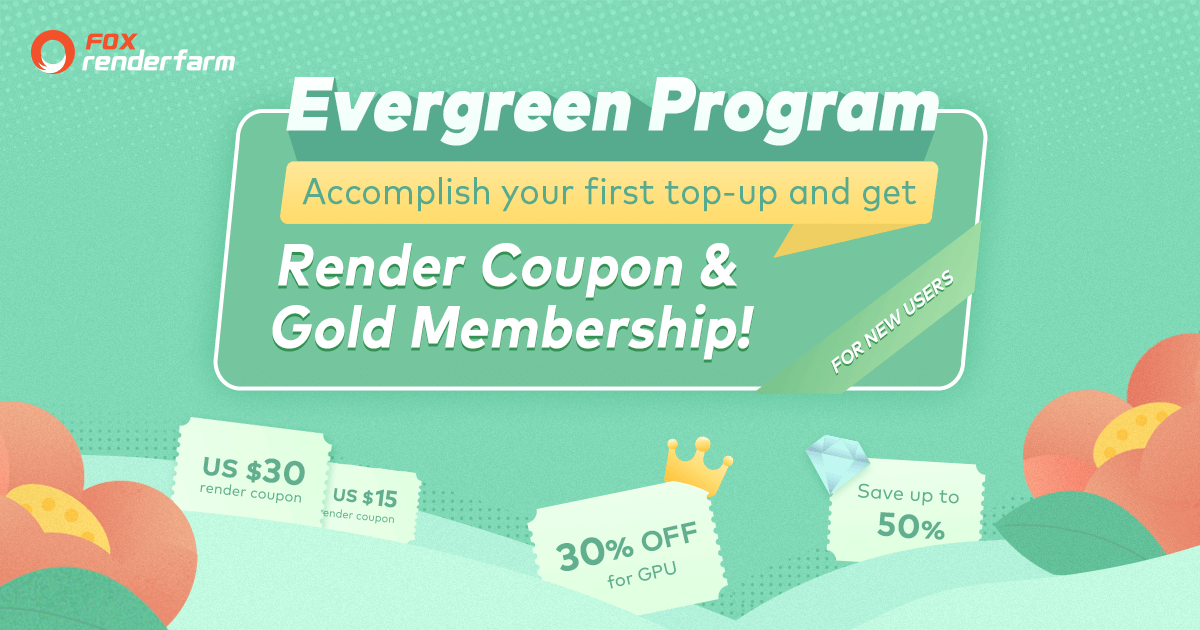 What is cloud-based rendering?
With the development of cloud computing, cloud-based rendering has come out in the CG industry. What is cloud-based rendering? Cloud-based rendering, aka cloud rendering, is a cloud service that relies on cloud computing, also you can call it an online render farm. That means users submit a local file to a cloud server, then a remote computer cluster completes the rendering. Finally, users shall download the rendered task from the cloud server.Cloud-based rendering refers to the technology that transfers the 2D or 3D graphics rendering from the client to the cloud server, the application of cloud rendering can greatly simplify the client. That’s to say, with display and network access functions, users can enjoy top-level graphics processing capabilities, which will make the same graphics application appear on different terminal devices without distinction. What difficulties does cloud rendering face?The difficulties faced by cloud rendering are more complex than conventional cloud computing applications. This is mainly due to the demanding requirements of 3D rendering for hardware performance and command response. The cloud rendering system may face the rendering requests of thousands of users, which will be huge pressure on the back-end server system. Compared with conventional cloud computing applications, when cloud-based rendering meets the needs of the same number of users, the hardware performance needs at least several tens of times higher than that of cloud computing, such as Gmail, Google Docs, and other commercial applications to scientific computing. Cloud rendering requires servers with amazing graphics performance, otherwise, it cannot meet the simultaneous rendering requests of a large number of users.1. Efficient data transmission or synchronization capabilities2. Efficient and accurate matching between the cloud computing environment and the user's local CG production environment3. Network and storage. Cloud rendering needs to connect to mass storage to save the rendered digital content products. Rendering 1 hour of HD sequence requires about 1TB of storage resources. When all rendering servers output data to the central storage at the same time, network planning becomes a yardstick to measure the final performance of the cluster system.4. Efficient, stable, and reasonable task distribution management tool. No matter how strong a single rendering node is, it will also cause a waste of resources without good management. Rendering management does not simply the arrangement of render machines. Qualified rendering management solutions embrace a well-designed system architecture. Different technical indicators need different solutions. It can be said that the hardware selection and construction only completed 20% of the overall construction of the render farm and 50% of the effort needed to plan the rendering investment.5. Cluster computing has a problem of efficiency. The number of CPUs and rendering time will be different from the actual situation, and the actual time used by different systems is not the same. The larger the number of CPUs, the shorter the rendering time, and they are inversely proportional. But in fact, the time spent on animation rendering and the number of CPUs is not linearly inversely proportional. The key to the problem lies in communication and software algorithms, including network communication and communication between the PC's internal CPU, memory, and hard disk. How many node computers, based on the number of CPUs, are used in the system are also issues that need to be considered. This requires a cluster rendering management software with excellent algorithms for scheduling to exert the performance of each CPU. What are the advantages of using a cloud-based rendering services? 1. Powerful rendering speedFox Renderfarm is one of the top three render farms in the world with plenty of rendering nodes and flexible solutions, which could definitely save your time in the rendering process. 2. Secure & ConfidentialFox Renderfarm has implemented a set of security strategies including banking security level computing center, Uninterruptible Power Supply, 24/7 CCTV monitoring, and strong encryption of data transmission. Fox Renderfarm has successfully completed MPAA’s Content Security Best Practices and officially become a TPN accredited vendor. We are committed to building a more secure cloud render farm that better protects the privacy of the project of our beloved customers. 3. 24/7 Customer Service and Technical SupportFox Renderfarm has an outstanding team with over 20 years’ experience in the CG industry. Around the clock customer service and technical support could always be a lifesaver if users met any problem when rendering.We also provide customized rendering services and a Key Account service team, which aims to provide the best cloud rendering solutions and technical support for our dear customers. 4. Affordable pricingFox Renderfarm offers students, teachers, and educational institutions an affordable pricing scheme (Diamond level membership) to support educational purposes. We support flexible solutions with the best price for clients by lowering the cost from our end. 5. Easy to UseFox Renderfarm has both webpage version and desktop client version, which are user-friendly, such as drag and drops project submission, preview during rendering, etc. The UI and pipeline are optimized continuously according to users' habits of the animation industry, which are easy to use.We also provide free services of Raysync Cloud for our users in the rendering process, which is a cloud-based platform for data storage and transferring at a high speed. 6. CSR: Green Data CenterThe electricity of Fox Renderfarm's green data center is all generated by wind and water power which is natural & clean. The data center is located where the climate is dry and the temperature is extremely low all year round, so it's not necessary to use air conditioners for cooling most times. The average PUE of our data center is under 1.2 which means the energy-saving ability is highly effective. Every time you use Fox Renderfarm for rendering, you are making contributions to the reduction of carbon dioxide emissions.
More
2021-01-28 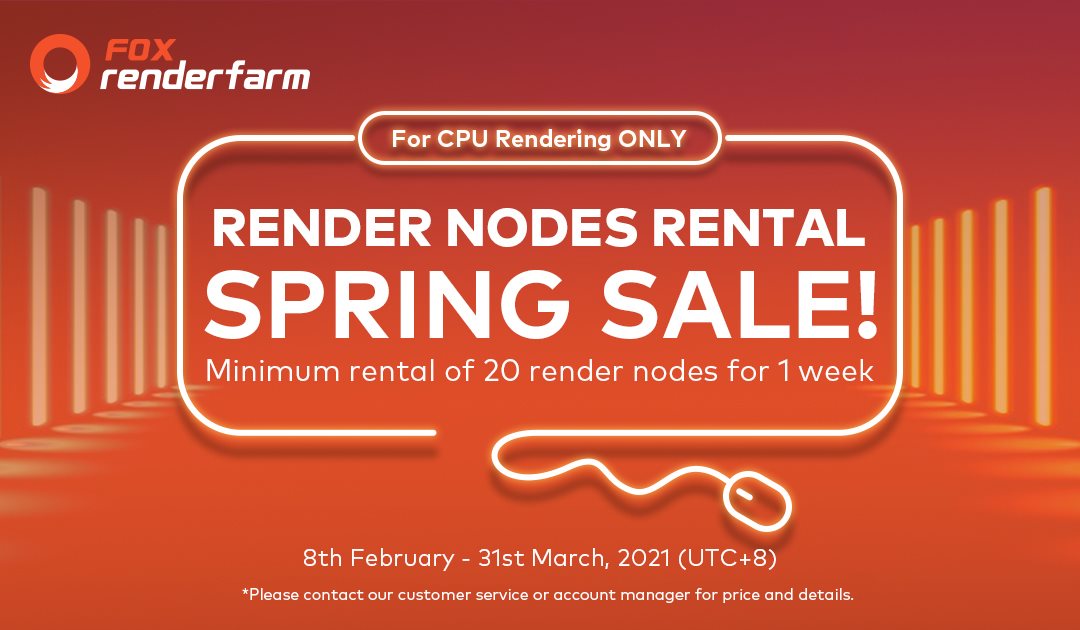