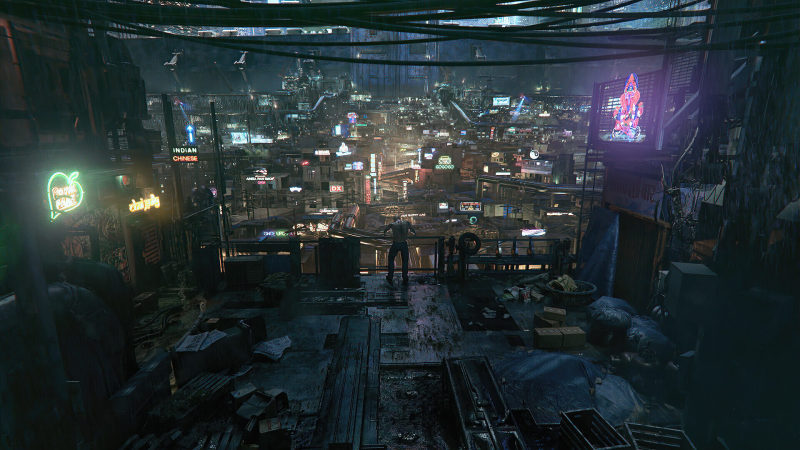 FGT Art, initiated and organized by Fox Renderfarm, is a program that encourages all Fox Renderfarm users to share their talents and get awarded monthly. We are very pleased to announce that the FGT Art February winner is Rahul Venugopal, who is the creator of the award-winning work Cyberpunk Neo Dharavi, and also an outstanding Matte Painter / Environment TD from Framestore.

Rahul is a digital matte painter and compositor, who has worked for many fantastic projects including feature films, high-end TV series, TV commercials, and corporate videos. As a well-travelled artist, Rahul has worked in many countries such as Singapore, India, Bulgaria, Turkey, China, United Kingdom, Canada, and the United Arab Emirates.

In his 13-year CG journey, he has participated in the production of many famous movies, including Interstellar, The Expendables 2, Olympus Has Fallen, Eega, ect.

From the exclusive interview, you can learn about how Rahul created his Cyberpunk artwork and share with us his CG journey.

Fox Renderfarm: Hi Rahul, thank you so much for accepting our interview! Could you give us a brief introduction about yourself?

Rahul: I am originally from Kochi, India and I have been in the motion pictures and television industry for the past 13 years. I started my career in Singapore and then went on to work as a freelance VFX artist in 8 countries around the world. At the moment, I am working as an Environment TD / Matte Painter at Framestore, Montreal.

Fox Renderfarm: Congratulations! How do you feel about being the February winner of FGT Art?

Rahul: I feel really honoured and excited, this project was really a fun one and I feel great to be honoured by the Fox Renderfarm community.

Rahul: This started off as a pitch for a client work but later I developed it into my own personal project. My main obvious inspiration for this project was Blade Runner but I wanted to put this scene in a not so distant future and put more relatable elements from the present day. The main idea was to show the division of wealth between state / mega corporations vs the poor section of the society. Also, at the same time show that there is thriving street life culture within slums, possibly infected with crimes, gambling and adult entertainment.

Fox Renderfarm: We can see that there are some Indian elements in the scene, could you introduce these details and how you design them?

Rahul: I wanted to base this city in India and I took modern-day metropolises like Mumbai as an inspiration where rich and poor districts are almost side by side. I took a lot of elements from Mumbai Dharavi Slums and bashed it with Hong Kong-style neon lights but with flavours of Indian brands and local shops signages. Also, I kept a neon signage of Hindu God Ganesha to give this city a distinctive Asian taste.

Fox Renderfarm: The composition, modeling and lighting of the work are pretty great, which part satisfied you most? And could you tell us how you make this part?

Rahul: Majority of the models are kitbashed from various commercial and non-commercial 3D kitbash sets so I spend the majority of the time developing the look and feel of the city. I am really satisfied by the overall mood. I think I could have made it more hazy to make it more photorealistic but since this was a personal project, I took the freedom to reveal most of the details that I had put into this work.

Fox Renderfarm: How long did it take to finish the work? Have you met any difficulties?

Rahul: From start to finish, this took about 3 weeks, getting the layout right was obviously a huge task for such a scale and getting the right blend of 3D and 2.5D for the comp was another challenging task towards the end.

Fox Renderfarm: Which cyberpunk artwork is your favorite (including movies, games, etc.)?

Rahul: The movie ‘The Matrix’ came out when I was in High School and it just blew my mind and there was no looking back. I knew what I wanted to do for a living and I've been pretty much after VFX ever since. My other influences included Blade Runner, Alien, Terminator 2, Minority Report and Ghost in the Shell.

Fox Renderfarm: As an outstanding digital matte painter and compositor, you participated in the production of many movies and TV projects, could you share with us your work experience along your CG journey, any project impressed you most?

Rahul: I have enjoyed working each and every project that I have got the opportunity to work on. However, I especially cherish working on Interstellar as a Digital Compositor back in 2014 at DNEG, London. I really enjoyed watching the film and it is one of my all-time favorite movies.

I also enjoyed a lot working Ad Astra as Lead Digital Matte Painter at Mr.X Montreal. I particularly feel proud about my work in Ad Astra since I was able to contribute to the look and feel of the entire opening sequence where we see Earth from eighty thousand feet above the atmosphere.

Rahul: I was amazed how easy and efficient Fox Renderfarm was even for first-time users and the support I received from your customer care team was top-notch. I think moving forward, I have more confidence to use more 3D and less of 2.5D with the help of Fox Renderfarm :)

Rahul: It is really exciting times for CG development now, especially with services like Fox Renderfarm which is easily accessible for any artists around the globe. There is no limitation to what you can achieve and I am really excited about what you guys will create since as artists we feed off from each other when it comes to inspiration.