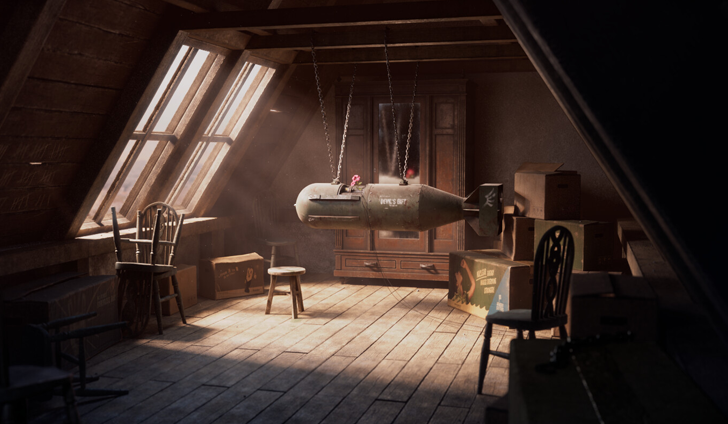 FGT Art, initiated and organized by the best cloud rendering services provider Fox Renderfarm, is a program that encourages all Fox Renderfarm users to share their talents and get awarded monthly. We are glad to announce that the FGT Art October Winner goes to Sascha Bähr.

War is over © Sascha Bähr

Based in Germany, Before 3D training, Sascha worked in the advertising industry. He has experience with large projects and has developed a good eye for quality and design over the years. With a great passion for 3D art in a long time, he became a student at Pixlvisn media arts academy, specializing in Lighting.

Here comes the interview with Sascha, in which he tells us how he created the excellent artwork.

Fox Renderfarm: Congratulations on being the October winner of FGT Art, 2021! How do you feel about it?

Sascha: I am very happy and honored to have won. As a student taking my first steps into the 3D industry I'm also happy that all the effort and energy I put into a project is recognized. It shows me that I'm on the right track.

Fox Renderfarm: Could you share with us your inspiration/references/moodboard of your project “War is over”?

Sascha: For my first demoreel project, I decided to do an interior. Since I'm a big fan of the 50s/60s style, I wanted to steer my setting in that direction. I thought about the concept myself and started with a rough sketch at first. Over time, new, better ideas came along and the project changed. I wanted to depict a larger conflict. The whole theme can probably be understood under the term "war and hope".

Fox Renderfarm: How long did you finish the work?

Sascha: Since I created the scene almost entirely by myself, I had to learn a lot during the process to improve my skills. It took me about 7 weeks to achieve this final result.

Fox Renderfarm: We could see flowers and characters on the bomb, could you share with us the design and modeling process?

Sascha: For this scene I thought of a little story. Someone built the bomb in the attic at the beginning of the war. The individual parts of the bomb were delivered in the various boxes. The builder gave this bomb the name "Devil's Gift" and sprayed it on the bomb. The bomb was completed but never detonated. Over time, the bomb began to rust and one of the cylinders containing the explosive liquid broke. From this broken cylinder grows the flower, as a sign of hope. The shot of the scene was taken when the war was over.

Fox Renderfarm: The lighting and compositing of the environment is amazing, how did you set that?

Sascha: First, I thought of a small story. As a thematic conflict I chose war and the resulting hope. For the design of the attic I chose the 50s, 60s.

After some research, the color palette was clear to me very early. The colors from that time, or much more the colors from the 2nd World War were drab and not very saturated. The desaturated factory palette of the textures helped me to get the threatening "war character" into the scene. The only "saturated" color should be the flower growing out of the bomb.

In conjunction with the environment and the camera, I built the scene in such a way that guidelines are created, which increase the focus on the hero object. This makes it easier to add a "focus" later during lighting

I also made sure that the main lit area in the room is in the center of the image.

For the final touch I added godrays in Nuke which I rendered in Maya/Arnold. I integrated the dust particles into Nuke using the particle system and linked them to different shapes, so as not to always show a repeating dust particle or just a sphere.

Sascha: For me as a student, it was very difficult to reach this level of quality at first. The lighting and compositing can very quickly look fake or too cartoony. In my case, it was good to work on other tasks periodically to get a fresh look at the whole.

Fox Renderfarm: We have received your excellent Entry, The cold grave, for FGT3D Explorer Challenge, could you introduce the project to us?

Sascha: At the beginning, I thought about what comes to mind first when I hear the word “Explorer”. Quickly familiar scenes from Indiana Jones or Jurassic Park were in my head. I wanted to create that "adventure" feeling when you have discovered an old mystical and forgotten place and the viewer is the first to be back there in a long time.

I also try to challenge myself with new things in each new project. With "The cold grave" I wanted to deal with the theme of "ice". That's how the idea with the mystical ice gate came about.

Fox Renderfarm: How do you feel about studying at PIXL VISN media arts academy?

Sascha: It's a great feeling to learn with so many like-minded people. The thought of being able to work at a well-known film studio after my training is what really drives me.

Fox Renderfarm: How do you improve your CG professional skills?

Sascha: I think that studying and understanding references is one of the most important things for me. After reaching one's current limit, it is worth its weight in gold to get the opinion of experienced artists and improve through the feedback.

Sascha: Many of my projects would not have been possible without the fast and intuitive rendering service. It is easy to use. If you have any problems or questions, the competent service helps you very quickly.

Sascha: It is a satisfying feeling to have completed a project in which a lot of work has gone into. I think all the work is paying off and making me a better artist. In the future I hope to work with other 3D enthusiasts to grow together.