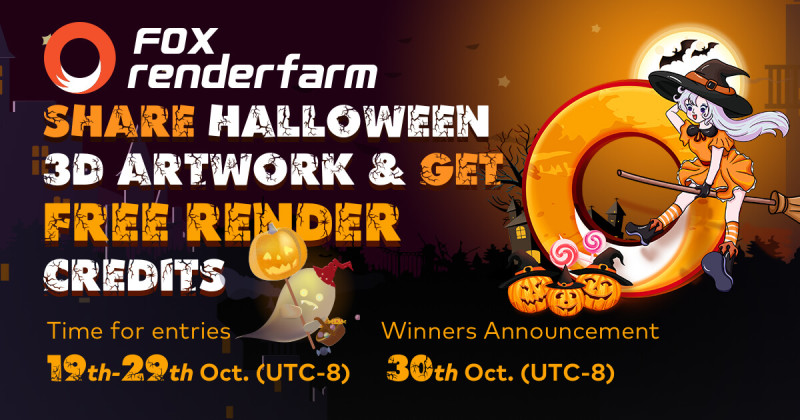 On October 30th, Fox Renderfarm announced the winner of our Halloween Treat, Kay John Yim, a Chartered Architect based in London, specializing in Architectural Visualization/CGI.

His 3D Trick Art “Ritual” is an amazing CGI project staged at Hagia Sophia, standing out for its excellent composition and lighting.

Here’s the interview between John and the TPN-Accredited cloud rendering services provider Fox Renderfarm, in which he talked about how he made the wonderful render.

Fox Renderfarm: Hi, John! Thank you so much for accepting our interview! Could you give us a brief introduction about yourself?

John: Sure! I am a Chartered Architect based in London, specializing in Architectural Visualization/CGI. As a 3D enthusiast growing up in Hong Kong, I always have an extreme admiration for people working in the film and game industries – for all the surreal photographic and photo-realistic CG contents they produce.

It was only until the recent COVID-19 lock-down that I began exploring 3D techniques outside of the realm of architecture – creature sculpting & grooming, character design and cloth simulation for instance. I started working on personal projects to experiment with colors and lighting in addition to learning new techniques.

Fox Renderfarm: Congratulations on winning Fox Renderfarm's Halloween Treat with your excellent 3D Trick Art “Ritual”, how do you feel about that?

John: Thank you! I feel honored to have won the Halloween Treat, and I look forward to participating in future Fox Renderfarm render challenges!

Fox Renderfarm: What’s the inspiration behind your artwork “Ritual”?

John: My intention was to create an atmospheric image with a narrative open for imagination. “Ritual”, like many of my personal CG projects, was built upon real locations - which in this case was the interior of the Hagia Sophia. Having been constructed and retrofitted as both a mosque and a church over the course of 1,500 years, I found the unique fusion of Christian and Islamic elements at the Hagia Sophia mesmerizing and enigmatic, hence the perfect backdrop for storytelling.

The character was inspired by a YouTuber “Taylor R” - who introduced me to Japanese Lolita fashion, a fashion style of which I found formal yet very suiting for my intention.

I Was A LOLITA For A Day (Modelling in Japan)

Fox Renderfarm: How long did you take to finish the work?

John: It took me about a week to finish, during which I spent most of the time testing different color palettes and lighting ideas.

Fox Renderfarm: The lighting is excellent, feeling like in a wonderland. How did you design the lighting?

John: Thanks! I took inspiration from the John Wick movies – starting with complementary colors and generally shifting the color spectrum to arrive at a convincing lighting & color combination.

I used candles and chandeliers as the primary light sources, while avoiding CG fake lights. I personally believe realistic lighting setups produce more believable and relatable renderings, regardless of whether it is a fantasy or photo-real quality that I am after.

Fox Renderfarm: How did you make the stylized character? Any references?

John: The character was blocked out in C4D and sculpted in ZBrush, in reference to Gothic Lolita Dresses – modern adaptations of Gothic Victorian Fashion.

John: Framing was probably the most challenging – as the character and the architecture vary quite a lot in scale, it was difficult to position the camera such that they were both readable while not competing for focus.

My solution was to use depth of field to separate the character’s silhouette from the backdrop, at the same time re-emphasizing the sense of space by carefully positioning chandeliers, candles and blue ambient light throughout.

Fox Renderfarm: Technically and visually, which is your favorite part? And why?

John: My favorite part is the depth of field and the bokeh that comes along with it– they add extra depth to the image and create additional room for imagination.

John: I got into CG rendering back when I was studying architecture in University, where everyone has to present architectural concepts with renderings on top of conventional 2D drawings. CAD softwares like Rhino, AutoCAD and Revit were essential tools of trade within the architectural industry, tools that I have been using for over 6,7 years until I struggled with the limitations of rendering packages available at the time.

C4D ended up being my choice for work for its stability and ease of use for animation/motion graphics. Since then I have been using C4D and Redshift as my primary rendering/modeling tool for both work (architectural visualization) and personal projects.

I am constantly experimenting with new softwares to up my quality and efficiency – my current passion lies in Houdini 18.5 and the procedural magic that it empowers!

John: For someone getting into C4D and Redshift, “Greyscalegorilla” is a great place to start. Beyond that, I think understanding 3D itself (concept of UV, VFX pipelines etc.) is much more important than learning what a particular button does, as modern software is advancing so quickly nowadays. “Hugo's Desk” has great videos that explain the in and outs of CG renderings in a VFX pipeline.

Apart from understanding the technicality of 3D, studying photography and cinematography can definitely go a long way - I think I personally learn more about rendering by watching movies than watching tutorials, back when C4D Redshift was in beta stage.

John: Yes, I have used Fox Renderfarm recently for a personal project – I really like it as I think it has one of the most user-friendly UIs among the multiple render-farm services I have used. The support I get is also really responsive and helpful!

John: I will be releasing CG art regularly – please follow me along with my CG journey on my social media channels! :)