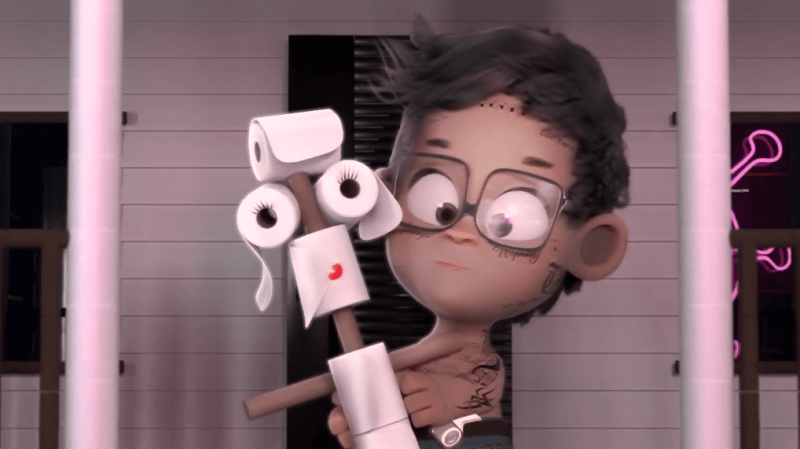 During the pandemic, the shortage of toilet paper must be one of the hot topics in the public.

A funny animated MV, the official video for Lil DooDoo's single "2020", reflects the shortage of toilet paper in a humorous way. The video is directed by Lil DooDoo, animated by Ricky San E, who is also the September winner of FGT Art, a platform encouraging all artists to share their artworks with the CG community which are rendered with Fox Renderfarm.

Ricky appraised Lil DooDoo as a potential musician, so this cooperation gave him the chance to invest in Lil DooDoo’s music career. ‘’It would be like helping the Beatles record their first record before they took off. “ Ricky published the music video on his YouTube channel and said.

Graduated from Ringling College of Art and Design, Ricky has interned at Anima Estudios and Blizzard, done some freelance for Gucci / PinkSalt Milan, and he is working at Avalanche WB currently. In this exclusive interview, he talked about how he made the amazing MV.

Fox Renderfarm: Hi Ricky, could you give us a brief introduction about yourself?

Ricky: Absolutely, it’s my pleasure and honor. I’m a former, very unsuccessful stand up comedian that turned to animation as a medium to tell jokes and entertain.

Fox Renderfarm: How do you feel about being the September winner of FGT Art?

Ricky: Oh it’s amazing! I am extremely honored and honestly super happy that I found this service. Honestly, Fox Renderfarm was a pivotal tool in making this music video. I had mostly been making 2D animations for YouTube, this was the first 3D animation I’ve made in my free time after leaving college, and I sort of forgot how long rendering can take. If I had tried to render the project locally, it wouldn’t even be finished today. Fox Renderfarm made it possible to finish this animation.

Fox Renderfarm: How long did you take to finish the work? And what software and plugins did you use?

Ricky: Honestly, the biggest limitation of this project was time. Since this project was made after business hours, I only had the weekends and about two hours during the week to work on it. I truly have to give my project coordinator Emily Rives a shout-out. She made a schedule with bids for each shot and step of the pipeline and kept things on track to make sure the project could get done in time. She was also a great producer by shutting things down that wouldn’t have been possible for me to achieve in time. For example, I used Maya and Arnold to render, there is a feature in the Arnold renderer called atmospheric volume. I initially had the intent to render with this feature turned on, however rendering a single frame with this feature turned on increases render times exponentially, so I was looking at a couple of extra hours of render time per frame. I simply didn’t have the budget or time for that, so instead the smoke was comped on post using DaVinci Resolve. The final image ended up looking cleaner and I had greater control as to what I wanted the smoke to be doing. The whole project took about 4 months.

Fox Renderfarm: Can you tell us about the pipeline of the project?

Ricky: Of course, I started by modeling the character and the set. Once I had the character rigged and textured, I proceeded to shoot a reference animatic where I acted out the music video. This allowed me to start working on the edit and allowed production to know how many shots were going to be in the final edit and how much time could realistically be spent on each shot.

I then worked on layout, doing a whole layout pass on each shot before moving to animation to achieve consistency. I then moved to animation. Having a great schedule was great to make sure how much time I could spend on each shot for each step of the pipeline. I honestly can animate better than I did for this music video, but I needed to work with time constraints due to the nature of the project to achieve the minimum viable product. Once I had the animation in spline and looked somewhat okay, I created a couple of scripts to automate some overlap to give the illusion of a second animation pass. Because the character had Xgen, I needed to export the final animation as an Alembic Cache. I created a couple of scripts that made this pipeline faster. One script queried the name of the animation file “shot_0010” for example and created an alembic cache with that specific name saved to a subfolder by the same name in the cache project folder. I then had another script that would un-reference the character rig, brought in the correct cache by looking at the name of that shot, (which saved a lot of time digging through directories), brought in the final shaders as a reference and assigned said shaders to the alembic cache all with the click of a button. Then I only needed to import Xgen, dynamics, and render templates that I created to all shots and throw a hero light to help the character pop. The set file all the other lights and were the same across all shots. I used Arnold Standins for all the toilet paper sets to optimize performance.

Fox Renderfarm: The rapper in the MV is so cute and cool, and there are many creative “TP productions”, could you tell us how you make them?

Ricky: Thank you so much, I tried to make him cuter than he is in real life haha. For sure, I created a couple of sets organized in different ways and exported them as Arnold Standins. This allowed me to just duplicate the standins and spread them around the hangar without having to worry about hundreds of thousands of polygons slowing down Maya. For the other TP creations like the House, it was a combination of using cloth sim to drape the toilet paper on them as well as some custom posing that I did through a custom lattice toilet paper rig that I created.

Ricky: I ran into some issues with XGen and namespace compatibility issues using XGen. I used the geo cache approach and imported the geo cache without a namespace to get it to work. I feel like doing this actually helped renders be faster and the files be less dense since there was no rig and no rig evaluation during the frames.

Fox Renderfarm: The MV shows an interesting song about the epidemic in 2020, does COVID-19 affect your work and creation?

Ricky: It was heavily inspired by current times and these weird times we are all experiencing. I wanted to look at the funny side of things, I think the fact that we had a toilet paper shortage was kind of funny and the idea of people hoarding toilet paper was funny to me. I imagined people will be using toilet paper that they hoarded in 2020 for years to come. I think it would’ve been smarter for Lil DooDoo to write a song about a different and more relevant aspect of the covid experience, I think the toilet paper shortage didn’t last as long as he thought, but oh well.

Ricky: I think it’s great. I love animating, it’s both a career and a hobby for me. The hardest pill to swallow after graduating was losing access to the school’s render farms, which meant that I would either have to be rich (which I’m not) and buy multiple computers or be okay with playblasts, but I care about the final product not just the animation so that wasn’t really an option. Finding Fox Renderfarm cloud was refreshing, it truly solves this big CG artist need of having affordable, fast and secure access to farm rendering. I was also blown away by the amazing customer service. Truly impressed.

Ricky: I would say “hey, you can make films now, just yourself. You now have access to the necessary computing power to render things. Thanks to Fox Renderfarm.” Also, “stay safe, have fun, keep staring at computers.”