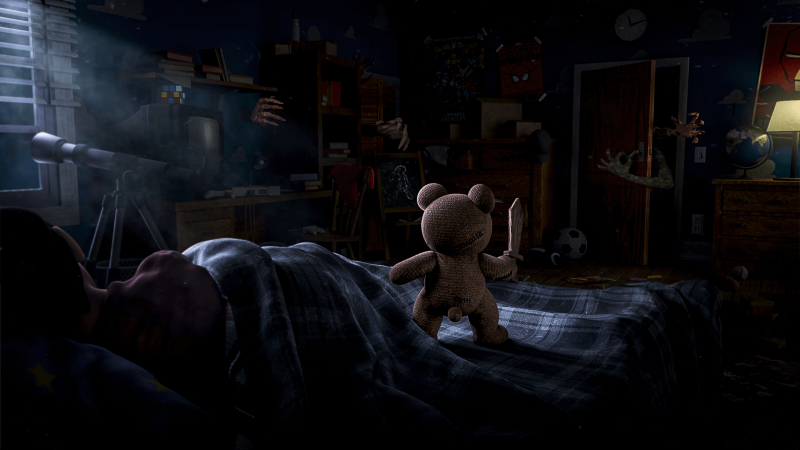 FGT3D “Hero” Challenge organized by the TPN-Accredited cloud rendering services provider, Fox Renderfarm, was started in June and sponsored by our awesome sponsors, including TopoGun, Friendly Shade, Graswald, Raysync, ProductionCrate, Textures.com, Texturebox and Marmoset. In September, twelve finalists were received votes by our jury and three winners were picked! Thank everyone for participating!

Here’s the interview between our friend Jeffery and Fox Renderfarm, in which we can find out how he created this wonderful 3D render.

Fox Renderfarm: Hi, Jeffrey! Thank you so much for accepting our interview! Could you give us a brief introduction about yourself?

Jeffrey: My Name is Jeffrey Frias and I am a 3D Artist at Pixomondo Stuttgart, Germany.

Fox Renderfarm: Congratulations on winning 2nd place in the FGT3D Hero Challenge, how do you feel about that?

Jeffrey: I'm very happy that I won 2nd Place, but also a bit disappointed that I didn't get 1st place, but given that it was a challenge with many great competitors, it was to be expected that there was no guarantee of being 1st, let alone one of the winners. so in the end i'm just glad to have won too.

Fox Renderfarm: How long did you take to finish the work, Cuddly Protector ?

Jeffrey: In total, about a week but stretched out through a month because of other stuff.

Jeffrey: I mainly used Maya for layout and modeling and a mix of Substance Painter and Photoshop for the Textures. Then I used V-Ray for lighting and as my main renderer.

Fox Renderfarm: In terms of storytelling, this work stimulates the audience’s imagination. What’s the inspiration behind?

Jeffrey: I didn't want to go the obvious route of Superheroes so I took inspiration in the fact that most children, to be able to properly sleep without worries or be scared during the night, need to have their special object or environment to comfort them.

Be it a special pillow, their dog besides them, parents telling a story first, have a glass of milk etc., it would always ease them and help them fall asleep. And with that i decided to use a teddy bear as my main protagonist to envision that.

Fox Renderfarm: The narrative lighting creates a horrible atmosphere that children can accept. The main light outside the window guides the audience to pay attention to the little bear while the lamp leads to the monster behind the door. How did you make them? Any references?

Jeffrey: I did create those 2 specific lights to attract attention to both the bear and the monsters, just to make them stand out more as focus points. i did spend a bit of time in deciding what the light sources for each of them should be, at first it was gonna be the lamp for the bear and the outside floor light behind the door for the monster, but it didn't quite fit right for the monster since it should come out from the darkness, so i decided to use the lamp instead for the monster and since the moon gives off a nice quite bluish light from it, I used that instead for the bear, rather than use it only to fill the scene. In the end, it was a good decision, since it also gave me the chance to use the moonlight as a volume ray to better place the bear upfront.

Jeffrey: I didn't really have any problems with anything.

Jeffrey: I wouldn't say artist or artwork, but the movie Monster Inc. was a big inspiration for me, while also serving as Base Concept that i built my design on.

Jeffrey: I started my 3D Career by attending the PIXL VISN MEDIA ARTS ACADEMY in Cologne, Germany. I studied there for about 15 months. afterwards I started working at PIXOMONDO Stuttgart in January 2019 and have been there until now.

Jeffrey: Everyone has their own reasons and preferences when it comes to 3D as I learned it in the industry, some only do it during work and there are also others who really enjoy doing it even after work. I'd say I’m one of the latter, since even after work, the first thing I do is sit again in front of my PC and keep working on my personal 3D Projects. I've learned a lot by just doing my own stuff in my spare time which in turn helps me with my tasks at work.

Jeffrey: I love it. It's saved me a lot of render time.

Back in my time at PIXL VISN, it also saved me multiple times from tight deadlines and late submissions.

I've tried other render farms back then, but the overall experience with Fox Renderfarm is something that always pulled me back to it and that's why it's my preferred renderfarm. Doesn't matter what time it is, the support is always ready to help and actually does fix the problems within minutes of asking.

Jeffrey: Try and join 3D Challenges/ Contests when you get the chance, it not only motivates you because of the prizes, but it also helps you better define and speed up your own workflow and skills with the deadline.