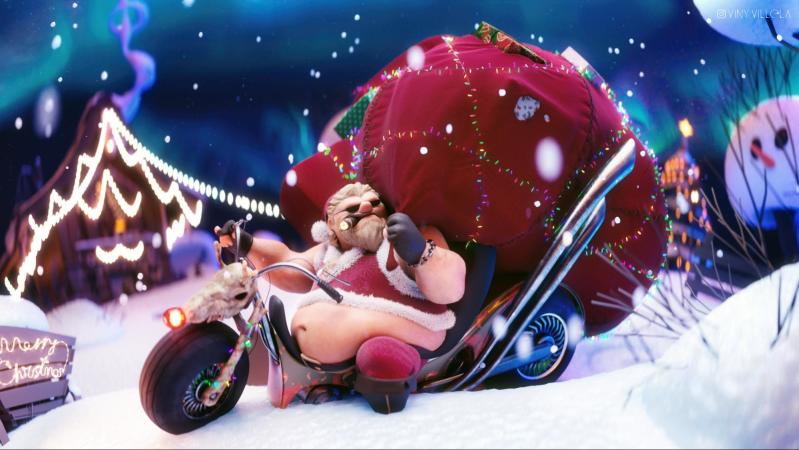 FGT3D Santa’s New Ride Challenge organized by the TPN-Accredited cloud rendering services provider, Fox Renderfarm, was started in November, 2020 and sponsored by our amazing sponsors, including XP-Pen, Corona Renderer, Redshift, TopoGun, Friendly Shade, Graswald, Raysync, Textures.com, Texturebox and iCube R&D Group. In early January, 2021, twelve finalists were received votes by our jury and three winners and three honorable mentions were picked! Congratulations to all the winners! And thanks to everyone for participating!

The second place winner is Vinicius Villela! Congratulations! His artwork, Heavy Metal Santa, stands out for its appealing design and modeling, which received appreciation from our jury.

“This one has a brilliantly funny general concept. The character design and modelling is very well executed and appealing. Excellent composition and very nice overall shading and coloring. Very well done! I wonder what kind of presents he actually delivers.” One of our judges, Kariem Saleh said, who is an award winning film director and animator based in Berlin, Germany.

Here’s the interview between Vinicius and Fox Renderfarm, in which we can find out how he created this wonderful 3D render.

Fox Renderfarm: Hi Vinicius, thank you so much for accepting our interview! Could you give us a brief introduction about yourself?

Vinicius: My name is Vinicius Villela, I have been a 3D Generalist since I was very young, I was fascinated by inventions and technology, the universe of games fascinated me as if it was something magical. Since I was a child I had an artistic impulse. I liked to draw, disassemble toys, create new ones. So when I was 14, I started to study computer graphics. where it was for me the opportunity to delve into an unlimited field of creation in terms of image, it was where I met several tools and possibilities, my curiosity was the main fuel when I first heard about it in 3D in the mid-2006 and that there were programs capable of creating and rendering three-dimensional images like the ones I used to see in the great cinema films at the time and like everyone born in the 90s, I was fascinated by the increasingly innovative effects and it couldn't be different to see those images left me even more motivated and ambitious with my studies to try to understand that science and since then it has been a long process of studies, research, trials and errors to improve myself more and more in this journey of learning that continues today.

Fox Renderfarm: How do you feel about winning second place in FGT3D Santa's New Ride?

Vinicius: It was an immense pleasure to have participated and reached the second prize. I was very committed and confident that I could reach the finalists, this was my fuel to complete the project. I do hope to participate more and more in contests like this so that I continue to challenge myself and evolve as an artist and as a person improving my criteria and my concepts because we always learn from each other.

Fox Renderfarm: What inspired you to create the work Heavy Metal Santa?

Vinicius: For a long time I already wanted to produce some image with the Christmas theme over time as the years passed and I never stopped to enjoy the occasion. The contest was an extra reason for me to dedicate myself this time. What inspired me the most were animations by Sony Imageworks like it's raining hamburger, hotel transylvania

Fox Renderfarm: How long did you take to finish the work? Did you face any difficulties?

Vinicius: It took me about 1 month to complete the whole project. My biggest difficulty in the conceptual part was to find harmony and composition between the character and the environment in the technical part, it was the hardware limitation to render the final image. Testing site until I could be sure that I would be putting Fox Renderfarm on my last rendering set.

Fox Renderfarm: The cartoon look of Santa is so great, could you tell us how you make the character design and modeling so appealing?

Vinicius: As for the design, I wanted to attribute more rustic features to the personality and the traditional figure of Santa Claus, so I chose to work with the concept of a metalhead as something more radical and cool, breaking a stereotyped view that we have culturally about Noel.

Fox Renderfarm: We’re all impressed by the materials of the work, which are so realistic, could you introduce how you make them?

Vinicius: In the lookdev part I worked all the texture part in Substance painter using part of your Source library. As for the render engine I opted for Arnold, as I was more familiar with my professional work.

Fox Renderfarm: How long have you been into the CG industry as a Character Artist? Could you tell us about your CG education and career experience?

Vinicius: I have been a character artist since 2014 but I started my studies at a young age when I was 14 years old I was researching everything on the internet looking for breakdowns, articles or anything that could add to the understanding of this universe of computer graphics over time I was conquering some opportunities and being able to invest in my training with mentors attending online workshops in the vast majority and so I specialized.

Vinicius: I used it for the first time for the contest itself. I found the service very friendly for a new user, sure about the error checking procedures before starting the render.

Vinicius: I think it is a tip even for me to think about the storytelling of the image before any other aspect over time. I realize more and more the value of the image's message, because it is she who will connect with the viewer, this was a great lesson for me in this contest and I would like to mention how Shiju NK was fantastic in his perception and managed to transmit with mastery in his concept.