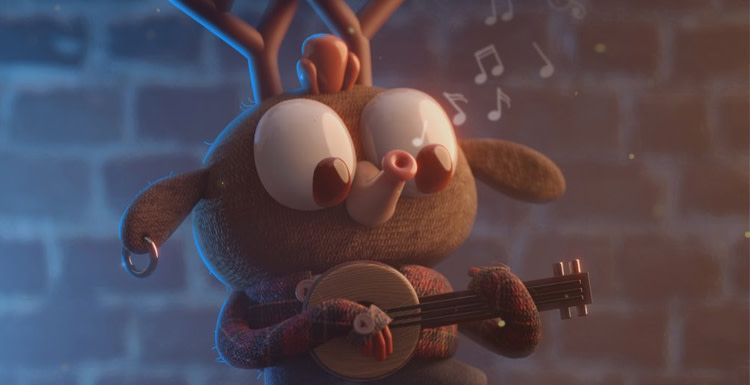 Street Musician Reindeer Made in Blender: Sprinkle Some Fun in Character

Speaking of reindeer, your first impression might be the ones pulling the sledge for Santa. Whereas, artists set their imagination free in the CGBoost “Reindeer” challenge which is sponsored by the TPN-accredited cloud render farm, Fox Renderfarm.

Besides all the cute creatures made by the artists, there’s one that the audience can’t take their eyes off, a punk-style reindeer with one leg on the stool, playing his guitar and humming alone.

You must want to know who’s the great mind behind, how he thought of the ideas making a street musician reindeer, what software and plugins he used, and how he made it possible step by step. Let’s introduce the creator, Dante Resendez Delgado, 3rd prize winner in the challenge. And his exclusive interview with Fox Renderfarm shares more than just his creation process. Let’s dive in and enjoy!

Fox Renderfarm: Hi, Dante! Thank you so much for accepting our interview. Could you please give a brief introduction about yourself?

Dante: Hello there, thanks for this interview, my name is Dante Resendez Delgado I call myself on social media “Mycro Tr Ct”. I’m a Mexican 3D artist, born in Victoria city, and I live and work in Monterrey.

I have been working for about 10 years as a 3D artist, and for about 6 years working as a 2D digital artist, doing graphic design and illustration. Most of my artworks are for advertising.

In 2006, I had the opportunity to travel out of Mexico and live in Canada. Because I have the intention to learn 3D animation, that goal happened after two years when I went to Spain and learned 3D. It was a very difficult journey.

Since then, I have been working in 3D for advertising doing a mix of 2D and 3D.

Fox Renderfarm: How do you feel about winning the 3rd prize in the CG Boost “Reindeer” Challenge?

Dante: So excited to win the challenge, I got the third place but I celebrated as I was winning the first prize. For me, getting that place was an honor, also having the chance to meet people who are better than me and have a strong background in the 3D world gives me more confidence.

Participating in challenges pushes my work in a better way. I learned to work faster and learned new techniques. In this case, I was working with particles for the first time in Blender and depth of field, also some hair fur, Quixel Mixer and Graswald.

Fox Renderfarm: The reindeer has a very strong characteristic. What’s your inspiration for this picture of the cute reindeer?

Dante: My inspiration came from Vancouver, I’ve been there before and remembered my Granville walks listening to the music on the street where traveler musicians playing for tips and asking for changes to continue their traveling, some of them are really good ones, those rebel and free souls are really good inspiration topics.

Dante: Yes I will. First, I had two words in my mind, do it simple and fast, I was only able to spend 6 days, no more than 8, because I have a full-time job. I could spend only nights, and Christmas vacation was coming. So I was making it easy on the planning, the idea, and also the production.

I wanted the reindeer to look like a stuffed toy. I went for square pattern textures to make a flannel shirt, and I found a good texture on google for free, that was for the shirt. For the skin, I used a normal map of a fabric texture I found on CCO textures and put in the node just to add volume. And also I used hair fur on the skin to help the texture look better. On the jeans, I did almost the same, but there I just corrected the color of the diffuse textures.

Fox Renderfarm: The lighting merges cold and warm together.How did you set the lighting? And any ideas behind that?

Dante: Technically, I used 3 light areas and one point to support the backlight. Area lights let me have more control over the scene, easy to get contrast on areas. I also used a very easy HDRI on the strength I got from the HDRI heaven. In my setting renders, I used a volume scatter node connected to the world that let me blur the particles.

I like to spend time playing with lamps, just play and see, if I like what I see that’s fine. For sure I’m always looking for good contrast and layers on the composition, also have in my mind what makes the sense on the character and the situation he is living on the scene. In this case, Reindeer is a nostalgic traveler character, a free soul who is going around the world with no worries. Some ideas came into my mind because my initial idea was to make a talented character who is discovered by a Santa Claus talent scout.

Dante: It took me 6 to no more than 8 nights after my job.

Dante: I used Blender 2.81 rendered with Eevee, I also used Graswald and Quixel Mixer textures for the floor and background, and some color corrections in Photoshop.

Fox Renderfarm: When and how did you come up with the idea of entering the 3D industry?

Dante: I was sure to start when I was a little kid, and that was just the idea to work in something related to art and entertainment, like animation or movies. I liked to watch cartoons like Hanna Barbera, Popeye, Looney Tunes... I always like to draw cartoons and I grew up with all that inspiration.

Popeye the Sailor (Image via Google)

Then I became a little older and I knew about a school called CalArts (California Institute of the Arts), then I found The Kubert School and VanArts (Vancouver Institute of Media Arts), they teach people how to draw comics and make animation movies. Wow!!! I remember sending letters written by hand in Spanish, asking for information when I was a teenager. But especially in 3D, it was when I saw Toy Story 1, that was the biggest inspiration and the first.

Fox Renderfarm: Could you share with us your education and work experience along the 3D journey?

Dante: For sure, I was studying 3D animation in Barcelona on IDEC, the university of Pompeu Fabra, they have a program and teach you animation and 3D. Students end up doing a short film, like preproduction and production, and you learn a lot from it. But for some people who don’t know anything about 3D, if you are thinking about doing a short film in 3D, you have to be a very organized person and do a good planning, and there are more things to do if you wanna make it right and have good results, this is my personal opinion.

I was studying really hard but I had a very failed result with my final project. That put me in another direction, I started to do more hard work, study and discipline myself to practice and improve my skills.

Artworks made by Dante in 2009

Experience in work, well, I started working as an illustrator during my study in graphic design. After my graduation, I kept working in the same direction, and during my free time, I worked on my own projects. I have two projects published by Pictoplasma (Berlin, 2006). The Pictoplasma Encyclopedia Character and Rabbit Essence poster. I also had the opportunity to collaborate on projects, some of which won prizes around the world. I did the concept art for the image of a school of design in Saltillo Mexico called The Digital Invaders, and that won so many prizes, one of which in Cannes Lions.

Fox Renderfarm: As an outstanding 3D artist, what do you do to keep yourself motivated and inspired?

Dante: Thanks for that. It is really difficult to keep yourself motivated because in many ways you are alone, people will say, your work is really good sometimes, other times don’t. Actually, only you know where you wanna go with your work, and at the end, you have to be your own judge, how good you wanna be, what really matters is what you believe you can do, then you have to put action!!! And try to make good decisions, don't forget that one.

Surround yourself with people who go in the same direction and who will understand your ideas even if you don't talk with them like, maybe you just follow them on Instagram, that's good!!! Because they will show you constantly what they are doing and you can be motivated watching what they are doing. That's my experience.

Inspiration is everywhere if you wanna be a character designer you can be inspired in all kinds of art, like fashion, photography, architecture because everything has a sense and you can apply in your own work.

Fox Renderfarm: Any artwork or anyone that inspires you in the industry?

Dante: Tartakovsky!!! One of my favorites, I love his work in Samurai Jack!!! And what he tries to do in Popeye 3D movie, in comic art, Joe Madureira (Battle Chasers), I love his very unique style the same as Humberto Ramos (Crimson), Luis Vasquez (illustrator from Monterrey Mexico), and Juan Díaz Canales (Black Sad).

Talking just about the drawing style, shape and color palette. Brian Froud, Concept Artist for Dark Crystal, you have to see his work, it is amazing, Daniel Lara is one of my favorites on 3D, everyone in Blender community knows who is, those artists are the very first ones who have been inspiring me.

Left: Brian Froud; Right: The World of the Dark Crystal(Images via Wikipedia & Google)

Dante: Thanks Fox Renderfarm for sponsoring me and for the interview, I hope it can inspire some CG enthusiasts, not much to say just never give up and keep on the road.