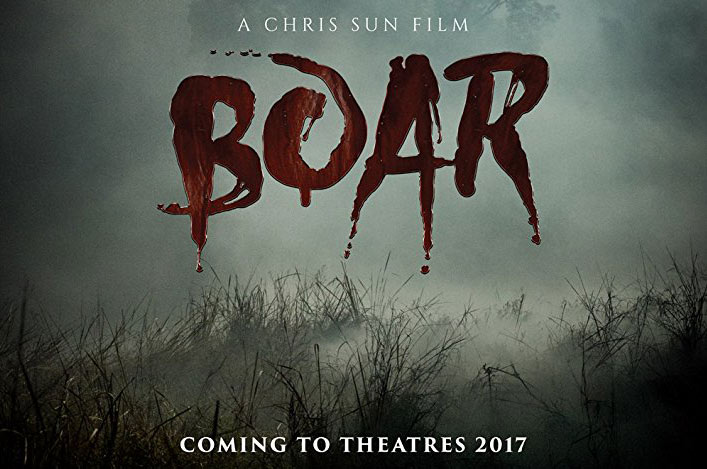 Directed by Chris Sun, an Australian horror film producer and produced by Slaughter FX, the horror movie "Boar" that Fox Renderfarm participated in cloud rendering will be released in Australia in November 2017 and will be enjoying its World Premieres on November 23 at the Australia’s Monster Film Festival. The "Boar" film shows Australia's adverse and beautiful natural landscape, yet lurks a dark and horrifying threat in this picturesque setting — a fierce beast that is ruthless, destroying the environment, massacring creatures, suck their blood, defend his territory by barbaric forces and brutally kill any creatures that hinder it.

The giant BOAR was a myth, a legend brought to life in a drunken pub tale. The thing about myths and legends, they are usually made up of partial truths, and in this case, complete and terrifying truths. Tearing a path of destruction through fencing and livestock, locals haven’t a clue of the chilling death that lurks in the striking Australian outback. The Monroe’s are on a road trip to reconnect with a life they left behind several years ago. Seeing old friends and loved ones bring the tight knit family even closer together. A spontaneous decision to picnic along the shores of a cool river three hours from town brings them face to face with death itself. A BOAR of staggering size with a taste for blood is cutting out a crude home in the bush, and has marked this area as his. Nothing can stand in its way, nothing can stop the destruction. While the boar continues its savage rampage, the Monroe’s settle in for a quiet afternoon, and an evening of wild pig and roo spotting. As they are slowly and savagely stalked and slaughtered by the beast, the fight for survival becomes as animalistic and brutal as the animal itself. During the cooperation, we learned that producer Chris Sun is keen on terror, bloodiness and courage-inspired theme for his productions. Most of the horror films he directed were shot through the actual scene, giving a strong and real visual impact as well as sensory experience. He has won the "Best Director", "Best Screenplay", "Grand Jury Prize" and other honorary awards and can be said to be widely known in Australia. Nearly 85% of the director's film, "Boar," was filmed using actual results. The technical problems added more workload to his project. In post-production, the cloud rendering service provided by Fox Renderfarm responses in a timely manner with the smooth rendering process, it has greatly reduced the film output time, significantly improving the overall efficiency of the film letting the film release to be on schedule.

Universal Pictures Australia is currently working with other major global film companies for worldwide release. Stay tuned for the premiere at Melbourne's Lido Cinemas, at 23:00 on November 23, 2017 (local time).