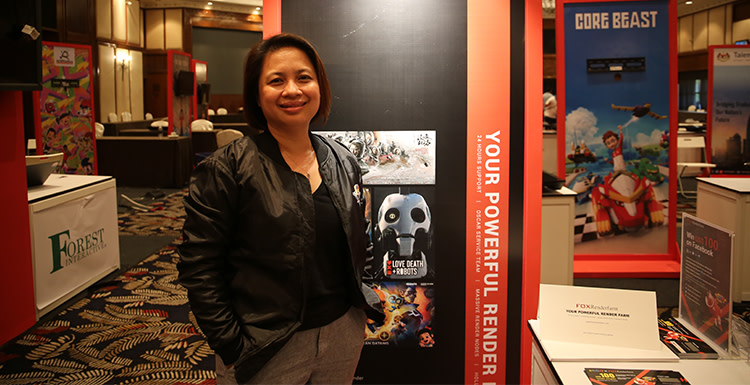 As one of the 1st-generation practitioners of the CG industry in Malaysia, Juhaidah Joemin devotes to the development of the CG film and television industry in Malaysia. She is also the co-founder and Managing Director of Giggle Garage Sdn Bhd, who has produced numerous popular animated TV series for children.

Fox Renderfarm was honored to have an interview with Juhaidah, who shared the aspiration and interesting stories along her CG journey.

When Juhaidah was a child, she was so fascinated with cartoons and animation, which became the inspiration for starting her career in the CG industry.

She first ventured into the field of animation by obtaining a degree in Film and Animation from Multimedia University, which is the first university to teach animation that time in Malaysia.

Inspired by the vision of making the industry starts, Juhaidah decided to join Malaysia Digital Economy Corporation (MDEC) after graduation. It was 2000 when there were few companies proposing in the post-production and commercials, but none on content in animation. So, Juhaidah joined MDEC to learn more about the industry, as well as to have experience in this field.

Citing agencies such as MDEC as one of the key supporters of her success through training and mentoring, funding and international market access, Juhaidah stressed that she would not have reached such heights without MDEC’s help.

Fueled by her strong passion for storytelling and creating a whole new world out of her imagination, Juhaidah set up Giggle Garage in 2010 with three other staff. She is taking a role as Managing Director and Executive Producer, overseeing creative development and project execution for the company's original IPs and co‐production properties of children and family entertainment.

Giggle Garage has since created nearly 10 different animated series including Kazoops, Cam & Leon, Boing the Play Ranger. Kazoops is a Netflix original which is broadcasting in 180 countries in 21 languages and is a co-production with Australia & UK. With 120 and 42 countries airing Boing the Play Ranger and Cam & Leon respectively, Giggle Garage is making waves around the world as an animation powerhouse and proud Malaysian export.

With so many outstanding animated series, the animation studio won several prestigious awards in the animation field including Asian TV Award in 2016 for Best 3D Animation and the Grand Prize for ASEAN-Japan Character Competition 2016 for Origanimals, an original homegrown TV series created by the studio.

Juhaidah’s success empowered women in the animation industry, a male-dominated field with a known glass ceiling for women in it. She was nominated for The Malaysian Women’s Weekly’s Great Women Of Our Time 2013 in the Arts & Media industry. What's more, during the Minggu Usahawan Nasional 2019, Juhaidah, representing the entire team at Giggle Garage Animations, won the Women Entrepreneur Icon (Digital) at the Women Entrepreneur Convention. Speaking on winning the award, she expressed her surprise and pleasure that there was an acknowledgment from ministries onto local entrepreneurs, especially the female ones, in the digital entrepreneurship field.

As an outstanding female entrepreneur, Juhaidah is a major catalyst in helping Malaysia develop into a hub of world-class creative content production and made great contributions to the CG industry.

Now, let’s know more about the stories behind her great woman power from the exclusive interview with Fox Renderfarm.

Juhaidah: Hi, Fox Renderfarm. My name is Juhaidah Joemin, I'm the Managing Director of Giggle Garage Animation. We are based in Cyberjaya, Malaysia.

Fox Renderfarm: While you worked on MDEC, any projects that you are most proud of?

Juhaidah: When I was with MDEC, I actually spent about eight years with them. And during those times, I was with this department called the Creative Department within MDEC. And what happened is they wanted to create a project that will represent the nation or the creative industry of Malaysia. So, I was given a task to start this project and start putting together the team, the creative team, the production companies. And the project is called Saladin, Saladin TV series. And this is the first fully animated TV series that was having co-production with the outside country at that time. And I was handling this project. We put together all the resources and we managed to convince the Al Jazeera Children Channel, the Qatar government to invest, to co-invest initial. The project nominated for International Emmy Awards for kids category and this is the first of a kind, first nomination for Malaysia, for a project that was created just to put together the entire animation industry. So, of course, there's something that I'm really proud about.

Fox Renderfarm: Could you introduce your own company and projects?

Juhaidah: Our company Giggle Garage, the name, of course, comes from our own inspiration where we wanted to create a place where it is happy, you giggle, you laugh all the time, and a place where is friendly enough for everyone to work together, and creating content to entertain kids and families. So, that's what the definition of the company name - Giggle Garage. We started off about nine years ago with our first IP called Origanimals. This is a preschool show of two seasons and after today we managed to actually get it broadcasted in more than 120 countries around the world. We won a number of awards for it as well. And after that, of course, moving on, we actually went to produce more original content. We co-produce with our partners. We have partners in South Korea, we have partners in Australia. So, I think after today we probably have completed about five titles, five TV series, and we have two more on the way, plus a few more under developments, of course with ten IPs actually within the span of nine years.

Fox Renderfarm: Being an entrepreneur, any challenges when building your own studio, developing your own IP and even marketing it?

Juhaidah: Definitely, the challenges are there, on a daily basis. But also, being a start-up, I guess the main challenge of the first challenges is the cash flow. When you start a company, you cannot run without cash. And this is the first hurdle that we went through. So of course, we started off the company providing services and all just to get the cash going, the company going. But at the same time, we also received help. There is a funding program for IP under MDEC. So, we actually benefited a lot from this program. They provide training, mentoring, market access that takes us to different markets to basically get exposure and market our show, as well as providing funding for the show. So, at least, this helped us to basically move on to the next stage.

Fox Renderfarm: Could you introduce the program for cultivating young CG artists?

Juhaidah: There is a number of programs in Malaysia that are cultivating young CG artists as well as young entrepreneurs, those who want to start their own business and all. And one of these is called, it used to be called the IPCC, the international creative IP challenges, and now it's called the DiCE. So, it's the same program. It's open to the entire creative community to submit the proposal, their ideas. And basically, once you are shortlisted, then you'll be pitching in front of the industry panel. And every year there will be a selection of between 5 to 8 projects to receive a grant from MDEC to produce the IP into a three-minute trailer, for example. And not only they are doing it on their own, the industry partners will be actually put inside the panel as mentors. So, for the span of six months, the industry panel will take the young creators through mentorship, like step by step, so that they understand what it needs to create the content. So, this has been done, I think, (for) more than 10 years right now. And, of course, there's a source of program for companies that are a bit bigger, a bit more matured and are ready to go into production. And there's a source of program that supports that. So, I guess it helps everyone to basically move to the next stage of their company growth.

Juhaidah: Well, of course, we used it before. So, it's familiar. In fact, we are really thankful that there are such facilities out there. Because, definitely, companies like us, we are producing content on a daily basis, like delivering 4 episodes a week for TV series, so the use of a render power is there, the needs of it is there, so we definitely need a lot of this kind of facilities around to help us produce our show.

Juhaidah: Creating your own content or creating a CG content, it can be fun sometimes because you are pursuing your passion, your love of animation and all. But it can be tough sometimes, even the toughness doesn't go forever. You'll get through it. Then you'll get to another new circle, new experience. The entire journey, it is an experience that everyone can appreciate. Even for us, after nine years, we are actually still learning about new technology. Every day, there is a new software or a new skill that we need to learn. So, that's why I'm excited about this industry because you never stop learning, you never get bored with it. And at the end of the day, if you're doing what you like, it's almost like you are living a good life, I guess.