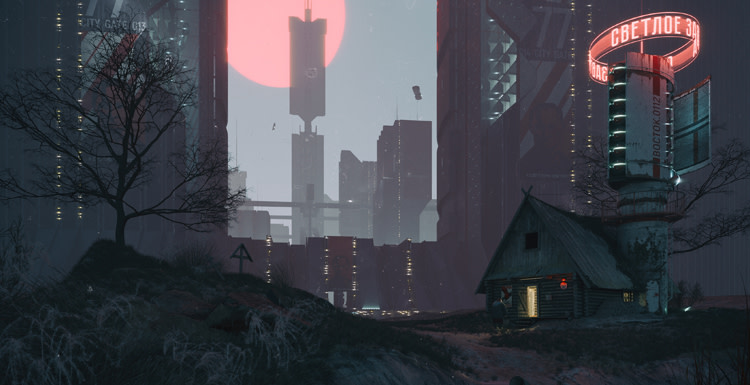 Interpret 1984 by George Orwell in ArchViz: From Quotation to Creation in 3ds Max

The Evermotion 2019 challenge that themed “The Time of Change”, sponsored by the TPN-Accredited render farm, Fox Renderfarm, spurred contemplations on how architecture is going to be affected by the apocalypse.

Sergey Chashchin stood out and won the 2nd Prize in the challenge because of the strong silhouette, ambient colors and lighting, and atmosphere and mode that were widely praised by the judges.

He has proven the fact that 3D is an ideal medium to speak for artists, their aesthetic mindset, political thinking, and opinions about humans and nature. By talking to Sergey, we got to know his ideas behind the quotation of ‘1984’ by George Orwell, and how he narrated them in environmental and architectural design.

Fox Renderfarm: Hi, Sergey. Thank you so much for accepting our interview, could you give us a brief introduction about yourself?

Sergey: Hello everybody! First of all, I would like to thank Fox Renderfarm for this interview.

My name is Sergey Chashchin, I am a CG artist from Siberia. Born on the border of Russia and China, now I live by Lake Baikal.

Since childhood, I’ve loved to draw. As a result, a passion for drawing led me to Irkutsk, where I was educated as an architect-designer. And while studying, I got into the CG industry.

Now I work in ArchViz. But I'm always glad to try something new.

Fox Renderfarm: Congrats on winning the 2nd Prize in the 2019 Evermotion Challenge, how do you feel about it?

Sergey: Thank you for your congratulations. I am very happy, very very very happy for me this is the first victory in the competition of such a plan and a huge impetus to improve my skills.

Fox Renderfarm: ‘1984’ by George Orwell was quoted throughout your artwork, what’s the inspiration behind the artwork?

Sergey: I really like his works, like the entire dystopian genre. This is a genre that allows you to see the world around us more subtly, to think about the problems of not only one individual, but something more.

Fox Renderfarm: The submitted piece is a long vertical image with a strong silhouette and contrast. Could you introduce the idea behind the composition? And how did you realize your composition idea step by step?

Sergey: The idea here is in impending urbanization. In this background, for this, I made a city with walls going to the sky in the background. Because of this, I chose a vertical image.

To the foreground added an old house with an attached cyberpunk tower on the right, a dried-up tree and a couple of graves on the left for more dramatism. Next, I need a character to give life to the image.

Fox Renderfarm: The lighting design has a sense of apocalypse, how did you manage the lighting?

Sergey: Lighting here was created on the basis of one of my last year’s photos taken during the fires in Siberia. It’s pretty simple: CoronaSun + Sky and CoronaVulemetricMtl. The size of the Sun is 25 and its color is R189 G0 B0. The sky is almost minimal intensity - 0.02. There were many variations with the fog, but in the end, the settings are almost standard.

Fox Renderfarm: About the billboard, do you have any reference when making it?

Sergey: Since the idea of my project is a kind of totalitarian state of the future, I needed posters with leaders or symbols.

So I put together a couple of examples from the Internet and started drawing.

Fox Renderfarm: At the bottom of the image, the water reflection is really well-made, how did you do that?

Sergey: Here the pure geometry and understanding of the photo. The set focal distance is equal to the distance from the camera to reflection in water plus the distance to the reflected object.

Fox Renderfarm: Have you met any difficulties when making it? How did you solve it?

Sergey: In general, everything was without any difficulties. Over time, problems arose due to the combination of work and challenge.

Sergey: I won’t tell you exactly, but it all started in December. I found out too late about the contest and topics, so I was late. I had to quickly pull myself together and start doing.

Fox Renderfarm: What software and plugin did you use?

Sergey: Everything was created in 3ds Max 2020 + Corona renderer 4.1. At the moment, they completely suit me. Well, there was a bit of ZBrush when creating an old lady.

Fox Renderfarm: When and how did you come up with the idea of entering the 3D industry?

Sergey: It appeared in 2009, then I saw presentations of projects created using 3ds Max and thought - That's what I want to do.

Fox Renderfarm: Could you briefly tell us your education and work experience along your CG journey?

Sergey: Education plays a strong role in ArchViz. Let's just say: it is difficult to create architectural objects without understanding how they are arranged.

During my studies, I got a job as a visualizer in a small company, where I worked for five years. It was a time of speed, not quality or idea, but even there I tried to do something new for myself.

Then I became a freelancer. He worked with many architectural bureaus. And I'm still freelance.

Fox Renderfarm: We discovered that there are also a lot of fine commercial 3D pieces, ArchViz pieces and some fun animation projects you made in your portfolio. How did you keep yourself inspired and motivated? And what do you do to improve your techniques?

Sergey: Good question! I try to do each new project with something new for myself, let it be the lighting that you have not done or animation, the main thing is to find something new and love your job. And from this, there will be both motivation and improvement of skills.

Fox Renderfarm: Any artwork or anyone in the industry that inspires you the most?

Sergey: I am very inspired by artwork, from paintings by old masters to digital artists. Here are a few examples: Michael Kutsche, because of him I bought the first graphic tablet;

Simon Stolenhag, his paintings can be watched forever;

I will dwell on them, otherwise, you can list for a very long time.

Fox Renderfarm: Any other things you wanna share with CG enthusiasts?

Sergey: The main thing is not to stand still, especially in such a fast-growing industry as CG.