Both Nezha and Upin & Ipin have made massive box office success in their home country. As of October 2019, Nezha and Upin & Ipin rank respectively as the top and 2nd highest-grossing animated film in their local box offices of all time. Besides their commercial success and popularity within the local markets, being listed in the Animated Feature race in the Oscars demonstrates that their extraordinary stories and productions resonate with people from all walks of life regardless of age, race, and culture.

Fox Renderfarm is wholeheartedly happy for our customers’ breakthroughs and their recognition among the world stage. And as a world-leading cloud render farm that has served numerous big productions including Oscar winner and worldwide box office smashes, assistance to more content creations, no matter of what sizes or from what nations, with our effective and user-friendly cloud rendering services, is our endless pursuit. Because nothing is more delightful than seeing the progress and thriving of the whole community. And we are sincerely looking forward to more cooperation around the world!

Congratulations to all the contenders! The full list of the 32 animated features is attached below, check out to see the animated movies you can’t miss this year.

Thirty-two features have been submitted for consideration in the Animated Feature Film category for the 92nd Academy Awards®.

The submitted features, listed in alphabetical order, are:

ANIMAZE is an international film festival and conference dedicated to exploring the world of animation in all its diversity. Filmmakers from over 65 countries working in a wide range of genres and styles converge on Montreal in the summer. Proudly, the mischievous twins Upin and Ipin are now the winners of the international film award.

In this fantasy film, Upin, Ipin and their friends find a magical kris which transports them into a fictional country known as Inderaloka. Here they meet various colourful characters from Malay folklore and help them battle an powerful villian. Les' Copaque, the production company of Upin & Ipin, elected to create its own unique intellectual property based on traditional Malaysian mythology, but told in an energetic, child-friendly way.

The production of Upin & Ipin took 5 years to complete, and the cost is almost RM20 million, making it the most expensive Malaysian film ever made. Fox Renderfarm’s reliable and high-efficient cloud rendering service helped a lot in its rendering process. As a local animated film in Malaysia, Upin & Ipin’s award means a lot to the Malaysian animation industry.

Here we congratulate on Upin & Ipin’s great success in gaining international recognition and sincerely look forward to working together for the next project soon again! 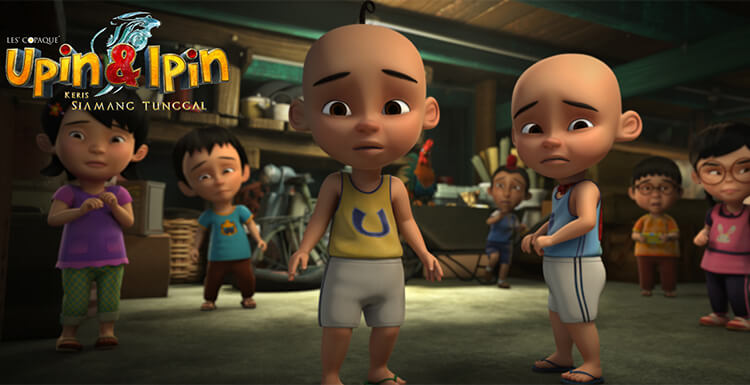