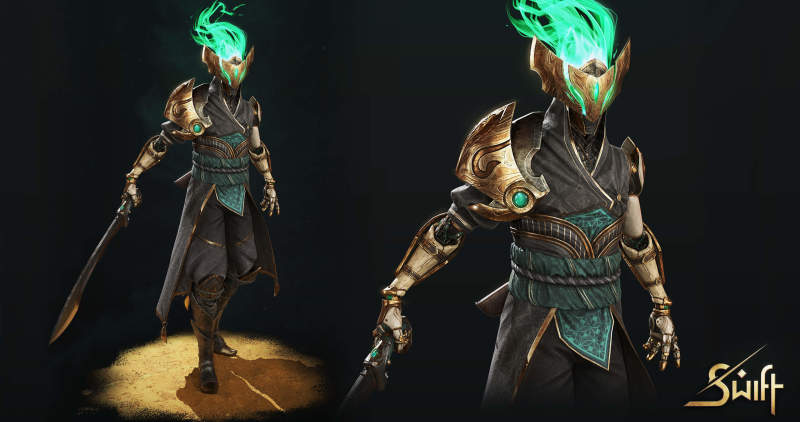 FGT3D Hunter Challenge organized by the TPN-Accredited cloud rendering services provider, Fox Renderfarm, was started in June, 2021 and sponsored by our amazing sponsors, including Corona Renderer, TopoGun, Friendly Shade, Graswald, Raysync, Textures.com, Texturebox, iCube R&D Group and Marmoset. After the selection by our jury, 3 Professional artworks and 3 Student artworks were picked and would be awarded the prizes provided by our amazing sponsors. Congratulations to all the winners! And thanks to everyone for participating!

The third-place winner of the Student Category is Antoine Destailleurs! Congratulations! His artwork, The Hunter, stands out for its great design and detail to the armor and human-like body.

“The use of colors and the contrast between the flexible fabric and metal parts are very effective. The character looks to have powerful arms and legs while being very lightweight. The design makes me believe that the character must be able to move extremely fast and jump high. It makes sense the character's name is Swift.” One of our judges, Miho Aoki said, who is the Associate Professor of Computer Art University of Alaska Fairbanks.

Here’s the interview between Antoine and Fox Renderfarm, in which we can find out how he created this wonderful 3D Hunter.

Fox Renderfarm: Hi, Antoine! Thank you so much for accepting our interview! Could you give us a brief introduction about yourself?

Antoine: Hi, I’m Antoine Destailleurs. I'm 25 years old and I’m currently working at Asobo as a Character Artist intern in order to validate my Master’s Degree. I learned 3D modeling at Supinfogame RUBIKA, a school located at Valenciennes, France. I’ve always been interested in creating characters and playing video games so I mixed both of these passions into what is now my work!

Fox Renderfarm: Congratulations on winning 3rd place in the Student Category of the FGT3D Hunter Challenge, how do you feel about that?

Antoine: Thanks, I’m really happy to bea part of the winners of this challenge, everyone did a really great job!

Fox Renderfarm: How long did you finish the work, The Hunter?

Antoine: The Hunter was part of the work I did for SWIFT, my graduation project, so I didn’t not really count the hours I put into it but I guess that it took me around 2 month from the design to the final 3D model.

Antoine: I only used Zbrush for modeling, 3D Coat for the retopology, 3ds Max for unwrapping my model and having a clean scene to work on to prepare my bake and finally, Substance Painter for the baking and texturing of my character.

Fox Renderfarm: What’s the inspiration behind your artwork? Any references?

Antoine: My main inspiration to design my character’s body was Alita. I loved how subtle and elegant her arms looked so I tried to keep that in mind. And for the outfit there was no major reference but I'd say that I found some inspirations in Dishonored, Assassin’s Creed and Middle-East culture.

Fox Renderfarm: Great design and detail to the armor and clothing, and then what sets it apart for me is on top of this human-like body we have the surprise of their head seemingly being made from magical green fire! How did you make it?

Antoine: Thanks, this cosmic energy was one of the main features of our characters. I made it using cylinders, fire textures that tiled on the UVs and some emissive, nothing complicated here. But The in-game trails were actually created by Nicolas Ceriani, who’s currently working as a VFX Intern at Riot Games. He created our VFX using Shuriken from Unity.

Antoine: No particular difficulties, but I learned Hard Surface modeling in Zbrush with this project so I actually spent more time than necessary on the character’s body but that’s part of the learning process ! We also had a massive rework of the art direction during the pre-production so I had to design new characters to fit our newly established art direction. Here again, no particular difficulties but it took a lot of time.

Antoine: For this project, as I said earlier, Vitaly Bulgarov’s Alita was a major inspiration. But in general I spend a lot of time browsing Artstation to find fantastic characters to inspire me.

Antoine: I’ve recently finished my studies at Supinfogame RUBIKA in Valenciennes, France. During which I had to do multiple internships. I did my first internship as Pixel Artist for a game developed by Clean Cut Games called Hairdash. Then I did two internships at Appeal Studios as a 3D Character Artist this time. I learned a lot about character creation and had the opportunity to work on an ambitious next-gen game that will be announced during THQ Nordic’s digital showcase. And finally, I’m currently working on A Plague Tale: Requiem at Asobo as a 3D Character Artist intern. Here again, I’m learning a lot about character creation! I don’t know if my internship will result in an employment yet, so if someone’s looking for a Character Artist… hey :) !

Antoine: I’ve learned a lot of things just by watching speedculpts and conferences on youtube. You can find all the knowledge you need for free on the internet so just look for it ! Also don’t be afraid to fail and keep working!

Fox Renderfarm: What do you think of the FGT3D Challenge, any suggestions for us?

Antoine: I think it’s a great opportunity to discover new artists and to expose your work to people ! No suggestions, it was great!

Antoine: Just do your best to have a result that satisfies you and on which you've learned new stuff!