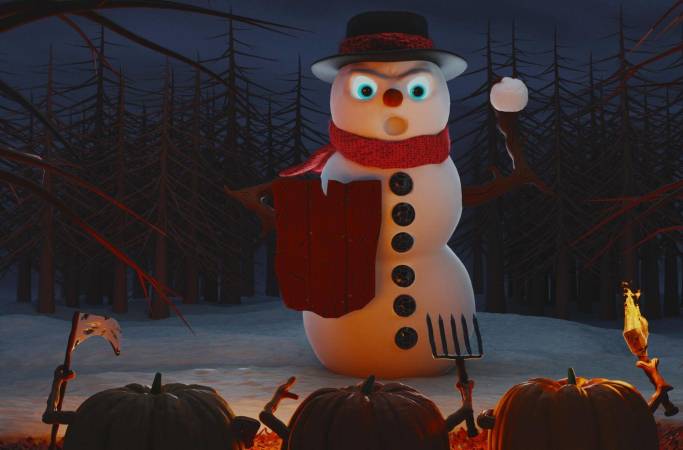 FGT3D Snowman Challenge organized by the TPN-Accredited cloud rendering services provider, Fox Renderfarm, was started in September, 2021 and sponsored by our amazing sponsors, including Maxon, Chaos, Poliigon, HDR Light Studio, Pilgway, TopoGun, Graswald, Raysync, Textures.com, Texturebox and iCube R&D Group. After the selection by our jury, 3 Professional artworks and 3 Student artworks were picked and would be awarded the prizes provided by our amazing sponsors. Congratulations to all the winners! And thanks to everyone for participating!

Congrats to Shannon Hodgson for winning second place in the Student category with his work, Winter is Coming.

“This is a very humorous image! A snowman is facing pumpkins who seem to want to stay. The lighting makes the snowman illuminated with a reddish-colored light and the pumpkins backlit, and helps the crash of the seasons look very intense.” One of our judges, Miho Aoki said, who is the Associate Professor of Computer Art University of Alaska Fairbanks.

Here's the interview with Shannon, in which we could find out how he made the warm lighting and plenty of details in the modeling.

Fox Renderfarm: Hi, Shannon! Thank you so much for accepting our interview! Could you give us a brief introduction about yourself?

Shannon: Hi, as you know my name is Shannon and I am from Australia. I’m 30 years old and I started 3D and blender about a year ago now. I’ve been doing everything to try and learn as much as possible but I feel like I’ve only just scratched the surface.

Fox Renderfarm: Congratulations on winning 2nd place in the Student Category of the FGT3D Snowman Challenge, how do you feel about that?

Shannon: There were some amazing entries, so I was very surprised but very grateful.

Fox Renderfarm: How long did you finish the work, Winter is Coming?

Shannon: It took about 4 weeks, maybe a little bit longer

Shannon: It was all done in Blender. No plugins used.

Fox Renderfarm: What’s the inspiration behind your artwork?

Shannon: I wanted to do something a bit different than what you normally think about a snowman. I thought about what's the opposite of a cute, cuddly, friendly snowman and came up with an angry and aggressive one. I then began brainstorming what a snowman would be fighting and settled on the changing of seasons.

Fox Renderfarm: Plenty of detail in the modeling and the scarf would have been a challenge. How did you make the character design and the composition?

Shannon: I mainly used a sculpting workflow. The design, composition and concept went through so many changes as you can see from my early renders. I initially was going for a semi-realistic look before I scrapped that and went for a stylised design. There were going to be little snowman minions but that just wasn’t working either. A lot of the design and composition was just trial and error and I just persisted with it until I finally got what I was happy with. It took a long time. At one point I thought I was never going to get it right but I am glad I kept going with it.

Fox Renderfarm: The lighting makes the snowman illuminated with a reddish-colored light and the pumpkins backlit, and helps the crash of the seasons look very intense. How did you make the lighting?

Shannon: I used the lighting system in Blender but again, just a lot of trial and error. I tried to do some god rays on the snowman initially but couldn’t get them to look good. After that, I got some feedback that my 3 point lighting system was just making the snowman look really flat which I realized was absolutely correct. I then just started trying to play around with it and realized I should be using the light that would be inside the pumpkins to intensify the mood.

Fox Renderfarm: Did you meet any difficulties when creating this work? And how did you solve them?

Shannon: As I said before, I struggled most with the composition. I think the most important thing I learnt was to not be afraid to delete things or go in a new direction if it's not working, even if you spent a fair bit of time on them.

Shannon: I am a student of Youtube. Over the past year I have just been watching hours and hours of tutorials, practicing and learning. Big shoutouts to Grant Abbitt, CG Cookie, CG Boost and Ryan King Art who I have learnt so much from.

Fox Renderfarm: What do you think of the FGT3D Challenge, any suggestions for us?

Shannon: I found it really fun!

Shannon: Don't give up and have fun with it.